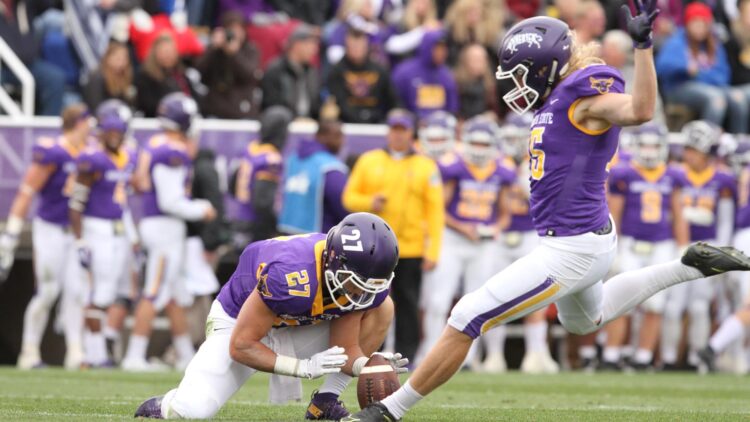 It’s always tough to tell how division II college players are going to transition to the professional game. If you watch tape of Adam Thielen in college, you can certainly see some of his ability and skill. However, Thielen played at Minnesota State Mankato against a bunch of players who would never even sniff the practice squad of an NFL team. His unproven play against professional level competition made him an absolute steal for his hometown Minnesota Vikings. After a rookie tryout, Thielen found his way onto the Vikings roster, and the rest we all know. The Vikings have another chance to bring in an MSU product in Kicker/Punter, Casey Bednarski.

Bednarski began his college career at the College of DuPage in Glen Ellyn, Illinois. This was a move to boost his academic standing up to a level to be able to attend a university, finish his degree, and play football. In two seasons at DuPage, he connected on 15 of 21 field goals and averaged 41.5 yards per punt. After his transfer to MSU for his Junior and Senior season, Bednarski hit on 40 of 50 field goals with a long of 63 yards. For reference, the longest field in NFL history is 64 yards, with only a handful of players ever hitting a 63-yarder. Bednarski also handled kickoff and punting duties at MSU.

Bednarski obviously has a booming leg, and some athleticism too. Not only has he hit a 63 yard field goal in an actual game, but there is video of him hitting a 70 yard field goal in practice and then doing a backflip. He also had a career long run of 31 yards while at MSU. His athleticism isn’t really that surprising as he was a receiver in high school who earned all-district honors.

While his big leg and athleticism is a huge plus, his directional kicking on kickoffs is another big part of his game. In the NFL where kickoffs have been cut down to the point they are now, the ability to put the ball where you want it is huge as it gives your team more time to chase down returners, and doesn’t give those same returners the space to build up speed. Bednarski’s versatility as a punter could also be a big help since anything extra he can do to make the team is good.

It’s hard to tell what the drawbacks of Bednarski’s game is. His kicks all look good, and to my eye he doesn’t seem to have a slow approach to his field goals. He bombs long kicks high so blocked kicks shouldn’t be a problem. What his success will come down to is his mental game. Playing in division II, he’s never had to make a kick in front of 50,000 screaming fans, or had a kick that meant as much as even one game winner in the NFL will. We all know that young kickers can have meltdowns, and that’s ok. It’s all about how you get up and take the next kick. If Bednarski can make kicks in high leverage situations, he could be one of the greats with how strong his leg is.

If the Vikings want Bednarski’s services, they will need to beat offers from a few other teams. Bednarski’s has met with the Vikes, but he has also met with the Buffalo Bills and Cincinnati Bengals. This means that the Vikings will either need to bite the bullet and spend a pick on him, unlikely, or make an offer that is better than the Bills or Bengals. Spielman has been known to shell out picks and roster spots for special teams, but Bednarski is a fringe pick, and it’s questionable whether the Vikings can match any offers. I would love to see him in purple again, but Minnesota might just be outbid.

Likelihood the Vikings are targeting him: Very Likely

Likelihood the Vikings could land him: 50-50