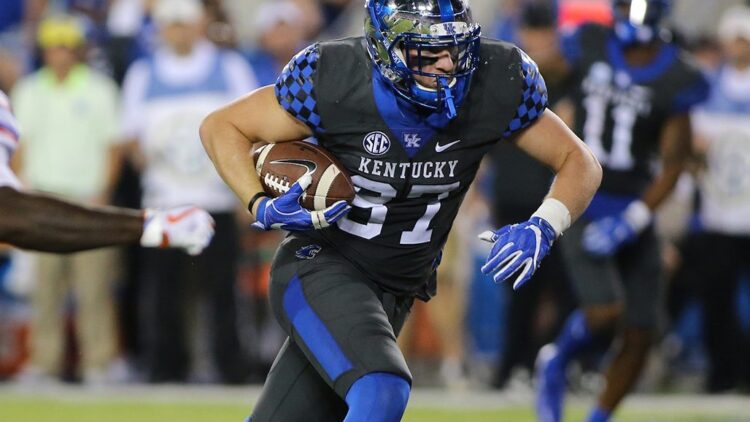 Minnesota Vikings tight end Kyle Rudolph set Vikings twitter on fire on Monday when he posted a picture of himself in a sweatshirt with the phrase “lots of game left” on it. Rumors have been flying this offseason of the possibility of trading, restructuring/extending, or cutting Rudolph to lessen his cap hit for 2019. The Vikings never publicly lessen support for Rudy, but plenty of fans and writers, myself included did. It appears that Kyle is ready to shut down critics and maintain his spot as tight end 1 on the Vikings roster, and the management could give him and the rest of the offense a hand by bringing in another good blocking and possession tight end. C.J. Conrad out of the University of Kentucky may just be the answer.

Conrad ended his four years at Kentucky as a captain, while receiving SEC honor roll status every year. He also totalled just over 1000 yards, and scored 12 touchdowns good enough for second all-time for Kentucky tight ends. Though Conrad showed a good nose for the endzone in college, he really showed his value as an excellent blocker and leader. His intangibles are certainly high.

Speaking of intangibles, Conrad showed his mental toughness and will to play following the combine in early March. Conrad was expecting to make a positive impact on his draft stock, in a class that is seemingly loaded with tight end talent, when he was told he would not be allowed to participate due to a heart condition. It was uncertain whether Conrad would ever play football again, but he was eventually cleared to workout and give his own pro-day performance. Conrad’s cardiologist has given reports to every team that his heart condition is not a long-term issue for football. Throughout the whole process Conrad has made it clear that he just wants to get back on the field and play the game he loves.

Outside of his competitive spirit and other intangibles, Conrad is an excellent run blocker, something the Vikings could use to help their power running game get going. Conrad’s size and strength make him an excellent option as a second tight end. Conrad’s route running and hands are also very good meaning he is a reliable target and could play a spell roll to Kyle Rudolph or be an extra option for quarterback Kirk Cousins.

Where Conrad is a risk is his health. Of course his cardiologist and doctors say he is fine and this heart condition shouldn’t be an issue, it is always a gamble with injuries that cannot be commonly diagnosed in the course of a game. Vikings fans will remember when Sharrif Floyd lost his promising young career to nerve damage that was unable to be solved. The nervous system and the cardiovascular system are different, but they’re both systems that aren’t regularly noted by most, and an issue with the cardiovascular system could quickly become deadly. Obviously, you don’t want to invest in a player who will never see the field because of medical complications.

The other issues that Conrad has is his lack of athleticism and run after catch ability. Conrad isn’t going to blaze past anybody, and his arms are short enough that he won’t be a crazy good jump ball threat. This makes him an unlikely fit as a true number one receiving tight end, relegating him to blocking and secondary pass catcher duties. Vikings fans have gotten used to Kyle Rudolph’s inability to make defenders miss or run through them, so Conrad wouldn’t be that much of a departure. Although, he is more likely to finish runs with power than Rudolph.

If the Vikings want Conrad, they will need to spend a fourth round pick. Conrad was, at one point, one of the top tight end prospects of a very deep draft. Teams will be looking to scoop him up for his potential, even with the risk he poses. The risk may very well be worth it though, he has the physicality, mentality, and heart to be a long time player in the league. I see him as similar to Matt Spaeth, the long-time Steelers tight end and Minnesota native. An excellent blocker, smart player, and very dependable. I would love to see Spielman take a risk on Conrad, and give him a chance to be a Viking for life.

Likelihood the Vikings are targeting him: 50-50