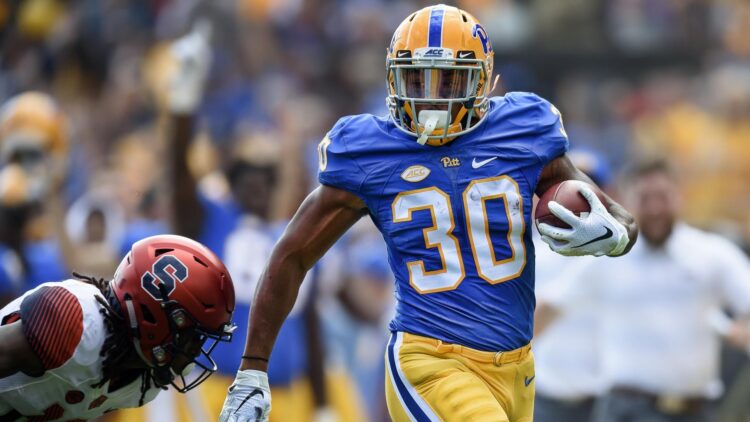 We’ve already written about the departure of Minnesota Vikings running back Latavius Murray to the New Orleans Saints, and how this leaves the vikings with a need for true second back. Of course the Vikings do have a promising young player in Mike Boone, but they would do themselves a lot of favors by trying to find more talent in the back end of the NFL draft. In replacing Murray, they could go with a man who reminds me a lot of him, University of Pittsburgh running back Qadree Ollison.

Ollison may be known to NFL fans as the player who, at Pittsburgh, spelled Pittsburgh Steelers running back James Conner while Conner underwent treatment for Hodgkins Lymphoma. In his freshman year, while filling in for Conner, Ollison ran for 1121 yards and 11 touchdowns. This performance earned him the spot of an All-ACC honoree. However the next two years were not nearly as successful. In his sophomore season, with the return of James Conner, he only picked up 127 yards on 33 carries with 2 touchdowns. His Junior year was also a lost year, he only had 398 yards and 5 touchdowns on 90 carries. Finally, he made a return to form his senior season, leading the Panthers with 1213 yards, 11 touchdowns, and a bowl game appearance.

What Ollison brings to the table is very similar to what Latavius Murray brought to the table for the Vikings. He is a physically imposing player at 6’2” and 230 lbs. It’s hard for tacklers, especially smaller players like defensive backs, to bring him down with arm tackles. He also is a patient player who lets his blocks develop and make one cut to the open lane. Once he hits that second level, he has a surprising amount of speed to run away from defenders and can take good runs and turn them into great runs. He can also be useful on passing plays because he can block very well. In fact, he could be used in a two back set as a hybrid lead blocker/runner.

There are quite a few problems with Ollison’s game however. He will not make people miss in one on one situations because he doesn’t have the wiggle to get away. His running style, similar to Murray’s, is very up and down which can make it difficult to get extra yards against tacklers who get the correct leverage on him. His receiving ability also is suspect as he was not asked to catch many passes at Pittsburgh, and as a result he might be relegated to running plays if he doesn’t learn how become a better receiver. Finally, there would be a question of scheme fit. The Vikings want to run a zone run scheme this season, and Ollison may not fit in well with that. His power is intriguing, but his quickness makes it hard to find a spot for him.

The Vikings would need to spend a late sixth or seventh round pick to get Ollison, or wait and see if he slides out of the draft to undrafted free agent territory. With his size and power, he might be a good fit to replace Latavius Murray for power situations, and he does have an ability to hit the second level and burn to the endzone. However, his lack of flexibility due to poor pass catching and not fitting a zone blocking scheme mean that he will likely be a pass from Rick Spielman. Ollison may be very similar to Murray, but there is a reason that Murray was allowed to walk and I think the team will look elsewhere for help at running back.

Likelihood the Vikings are targeting him: Unknown