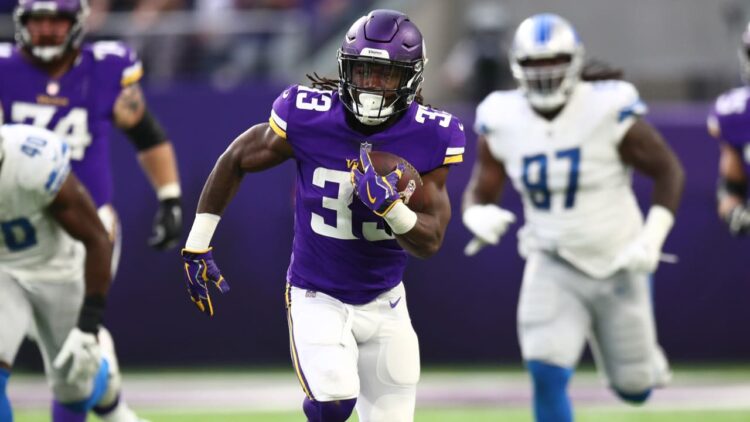 The Vikings went into Detroit Sunday second in the NFC North, but the only team that hadn’t notched in a win within the division (I know, the Lions hadn’t either, but we all saw what happened Monday night and I’m not going to be able to give that W to the Pack). This made Sunday’s game even more important than it otherwise would’ve been, as did the fact that we’ve seemingly had two Vikings teams this year, or rather two different Vikings offenses. There were the ones like the one against the Giants and Eagles, and there were the ones like that of the Packers and Bears games. One should’ve given the team and it’s fans confidence, in that the Giants and Eagles games were the two most recent contests. The other should’ve given us pause as they happened to be against NFC North opponents. So what team/offense showed up Sunday in Detroit?

The answer is a resounding: ‘Eh?!?’… well… that’s not fair; since I said in my intro that the success of this Vikings team is tied to which offense shows up, it’s easy to say that the more recent offense of the Giants and Eagles game was the one that dazzled on Ford Field Sunday. Cousins not only put up big numbers, but he also was consistent and dare I say… clutch? Cousins crossed the 300-yard mark for the third game in a row, he also had four touchdowns (which brings his three-game total to 10) and zero interceptions.

While you could argue that Cousins deserves at least co-MVP it was Dalvin Cook, who not only helped seal the game, but also arguably sealed the fact that he is the best running back in the NFL right now; Cook had 142 yards on 25 carries (for a HEALTHY 5.7 yard per carry average) and two touchdowns, including the final touchdown of the game which effectively ended the Lions comeback hopes and also showed just how great Cook is.

When the initial hole collapsed on his second touchdown (when the score was 35-30) Cook cut to his left and almost instantly juked back to his right to avoid a Lion defender, punching the ball into the end-zone for the final dagger.

It wasn’t all positive though. Star receiver Adam Thielen left the game with a hamstring injury after extending for an amazing touchdown in the first half. He somehow managed to get two feet in at the very end of the end-zone on a perfect throw from Cousins (who threaded the needle between two Lions defensive backs). Thielen was slow to get up and appeared to be limping heavily at times while he was walking back to the sideline. He was eventually ruled out and the onus fell to rookie wide receiver Olabisi Johnson to fill the GIANT shoes that Thielen left.

‘Bisi performed admirably in Thielen’s stead, catching a touchdown on four catches for 40 yards. The Vikings also “finally” started involving their tight ends, with Irv Smith Jr. and Kyle Rudolph combining for 118 yards and a touchdown. That leaves Diggs, who had another nice statistical day (7 receptions for 142 yards and no touchdowns, that’s a 20.3 yards per catch average). Diggs came through with a huge run after a huge catch late in the game, however he did also miss a perfectly thrown ball from Cousins in the end-zone on a deep ball, he also fumbled early in the game (the ball was recovered by the Vikings).

Needless to say, I’m clearly a “Diggs guy”. I was the first to call him the steal of the draft when the Vikings snagged him in the fifth round. However, if you’re going to take your feelings with the performance of someone else on your team (to the point of… You all know what happened), then you’d better play immaculately- ESPECIALLY when that person is the one dropping dimes in your direction. Again, I’m a “Diggs guy”, but he’d better apologize in the post-game for those plays if he has any shred of self-awareness (since he (and Thielen) essentially painted Cousins into a corner with their public statements). Yet, Cousins, is clearly good when painted into a corner.

Despite the fact that in the post-game former Giant Michael Strahan said the Vikings were the most “balanced” team in the NFL (which is something I’ve said for a while, on paper at least). Speaking of on paper (and bad segues), the Vikings defense was actually the weak link in this divisional contest. The Lions offense moved the ball early and often. Matthew Stafford, who seemingly has Zimmer’s number, threw for 364 yards, four touchdowns (and an interception). Marvin Jones had a career day with 10 catches for 93 yards and all four of the touchdowns that Stafford tossed on the day. Jones was often covered by Xavier Rhodes, who threw his helmet and frustration after Jones caught his fourth touchdown on him.

I’m not 100% certain as to why Rhodes was so upset, but I’d put everything I had (which technically is just my way of asking you to take on my crushing, crushing debt) it appeared he was angry with himself as he threw his helmet and mouthguard while walking back to the sideline and away from the refs and Jones. Had he been mad about the call that it was a catch (which it clearly was), he would’ve said something to the refs or motioned something for eagle-eyed writers with clearly nothing better to do to catch after watching a repeating GIF of the touchdown Clockwork Orange style.

With the next three weeks bringing the ‘Skins, Mahomes-less Chiefs and struggling Cowboys, the Vikings have put themselves in relatively good position. While I’m a bit apprehensive about how the defense performed, I’d take relying on this group of guys getting things back in order over the offense falling back to earth after two weeks of amazing play. The Vikings offense put the league on notice this week, as they continued to roll both in terms of their post-Bears efficiency and in spite of the fact that their best receiver left the game early. Like I said all last week, it’s hard not to get excited about what this team is doing and I’m even more encouraged after seeing the Vikings best what was the best team out of the last three opponents.

Credit to Cousins, especially, for this turnaround. He’s taken A LOT of heat for a myriad of reasons, and even I said I was officially off the bandwagon after the Lions game. However, it feels like he’s found a level of comfort (courtesy, also, of Kevin Stefanski and company) now that he’s had some time to make throws, a run game that is one of (if not the) best in the league and an offensive coordinator that knows how to use him. I’ve always said that Cousins can be an elite quarterback, with the caveat that he’d be an elite system guy. I know, “system guy” is synonymous for “game manager” and how can you be elite at mediocrity?