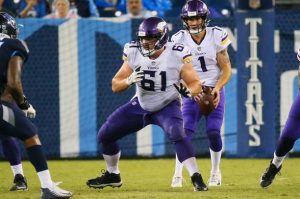 With a complete overhaul of the interior offensive line expected, the Minnesota Vikings aren’t done making moves. The team got things started on Wednesday by signing veteran guard Josh Kline to a three-year deal. Now, the team looks to have set its sights on bringing back another in-house free agent.

According to Chris Tomasson of the Pioneer Press, the Vikings have extended a contract offer to free agent Brett Jones. Jones (6-2, 315) was acquired from the New York Giants on Aug. 26th via trade. The Vikings sent the Giants a 2019 7th-round draft pick in exchange for the 27 year-old.

Source says #Vikings have made a contract offer to bring back center-guard Brett Jones. Any signing by Jones, though, doesn't seem imminent and things could extend into next week. As I've noted before, Seahawks, Jets, Eagles, Chiefs also in the mix for Jones.

Jones started three games for the Vikings this season while Pat Elflein recovered from offseason surgery. Jones filled in at center during the first three games of the season, allowing five pressures and zero sacks in 188 snaps. He had three snaps the rest of the season. He didn’t have enough snaps to quality for a positional ranking, but Pro Football Focus gave Jones an overall grade of 53.1. His pass blocking (70.3) was considerably better than his run blocking (46.5).

As for what kind of role Jones may have if he returns, he could enter the draft as the de-facto starting left guard with the possibility of moving to a No. 1 backup role if he’s beaten out for the job.

Tomasson noted Seattle, Philadelphia, Kansas City and the New York Jets are also interested in acquiring Jones. As of now a signing “doesn’t seem imminent,” but we could be seeing another OL move made by the Vikings in the coming days.