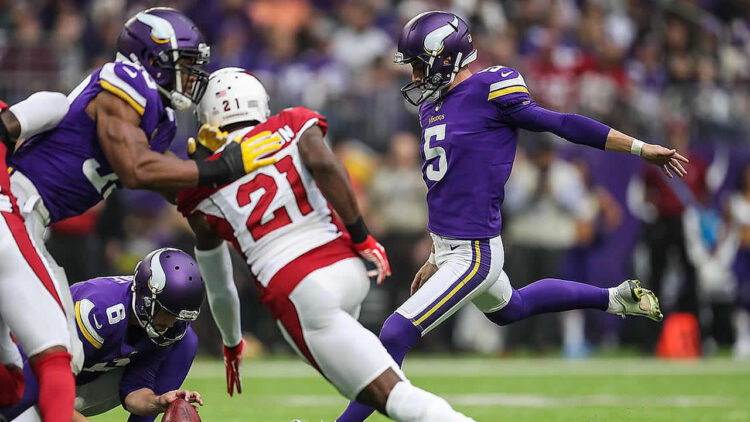 Potentially on his way out of Minnesota after the acquisition of Kaare Vedvik, Vikings’ kicker Dan Bailey may have found the very thing he needed to return to form.

On the official Hall of Fame website, “Ten Greatest Kickers In NFL History” are listed.

This is not a list of the greatest kickers in the Hall of Fame per se, but instead, a list compiled by the Hall’s editors of players, past and present.

And, through seven seasons, the Vikings’ placekicker. Or, one of them, presently.

Of all 10 kickers featured by the HOF, only Stephen Gostkowski of the New England Patriots has a better field goal conversion percentage in his career then Dan Bailey.

In an on-site poll asking readers who they thought was the greatest kicker in the history of the game, Morten Andersen ran away with 73% of the vote, followed by a far distant 9% for second place Adam Vinatieri.

Obviously, this list gives points for longevity, but what clearly stands to reason is that Dan Bailey still has the chance to become a Hall of Fame kicker with the highest accuracy rate on field goals and extra points in the history of the NFL.

And there’s also a chance that a 24-year old Norwegian may have put him back on track.

The Grass Is Always Greener

Trading a fifth-round pick for Kaare Vedvick in August, the Vikings basically planned on closing the door on Bailey, who not only saw a drop in his field goal conversion rate following a 2017 injury, but was also showing signs of inconsistency with his kicks through 2019 training camp.

Through two games of the preseason, Bailey was 1-1 on field goals and 5/5 on extra points.

The Vikings then received Vedvik to great fanfare, a tall, youthful athlete with a big leg that had been perfect in the preseason for the Baltimore Ravens.

In the Vikings’ third exhibition game, Vedvik got his chance to be the Minnesota field goal kicker, and, in front of the home crowd, begin his future as the solution to so much anxiety among fans.

In the next, and final preseason game, Vedvik hit a 27-yarder, (6 yards shorter than an extra point), then proceeded to shank another–from 37 yards out.

It made him 1- 4 in his Minnesota Viking preseason debut.

The door that had been swinging closed on Dan Bailey found a foot in it, owned by Bailey himself.

That foot then nailed two long kicks right down Broadway, the first from 54 yards out and the other from 43, making Bailey 3-3 on field goals and 5-5 on extra points for the preseason.

Is Bailey ready to return to the extraordinary form of 2015 when he converted his kicks at a 93.8% rate and was a First-Team All-Pro?

Probably not. But who knows? There were five teams in the league in 2018 who’s kickers hit over 91%. It seems rather insane to a Viking fan, but there it is.

Morten Andersen, that immortal New Orleans Saint considered by so many to be the best ever, only kicked at a 79.6% rate over his entire career, and converted FGs under 75 percent for seven seasons.

Anderson also never even got close to Bailey’s high mark of a 93.8% conversion rate on field goals until–get this–his final two seasons in Atlanta; at age 46 and 47, when he kicked at 87.0 and 89.3 percent respectively

In 1987, Anderson was also elected to be a First-Team All-Pro placekicker, after converting only 77.8% of his field goals for the New Orleans.

The Vikings recently employed a kicker who reminds one of Bailey. His name was Kai Forbath.

Forbath, playing for Mike Zimmer and the Vikings in 2016 and 2017, struggled with making extra points. Those missed kicks took a total of 8 points from the Vikings in two seasons.

In the 2017 playoffs, Forbath also drilled a 53-yard field goal to give the Vikings the lead over the New Orleans Saints with 1:29 left to go in the contest.

If he had missed it, game over.

Q: If Stefon Diggs did not complete ‘The Minneapolis Miracle’ just moments later, would Forbath have possibly won the game with a long kick?

Not only possible, but downright likely.

But, in the offseason of 2018, the Vikings decided to cut Forbath and use a 5th-round draft pick on Daniel Carlson from Auburn.

Is there a now possibility that Kaare Vedvik can turn out to be as good as Carlson was last year after he bombed in Minnesota, traveled to Oakland, and then kicked at a 94.1% field-goal rate on the season for the Raiders?

In the words of Mike Zimmer, recently asked about the state of his kicking game,

What we do know is that Dan Bailey–a guy on this team–remains among the greatest kickers’ in NFL history statistically after seven seasons.

He also appears fortified by an exhibition season competition, that was at best, unorthodox, and at worst, ham-handed.

The choice to now go with Dan Bailey in 2019 shouldn’t be hard.  Neither should finding the resolve to make it.