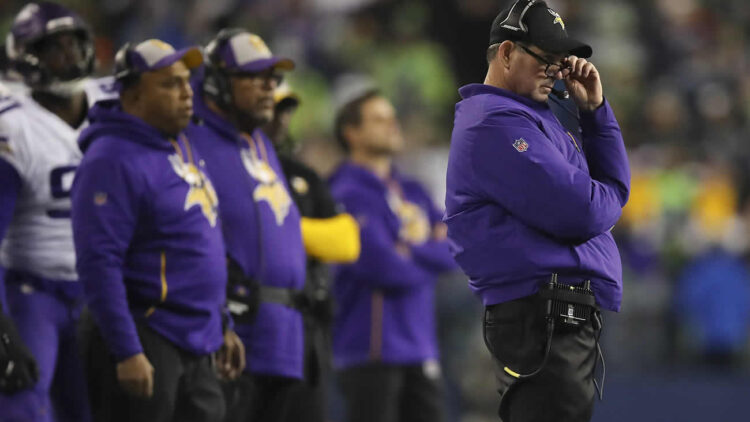 *Editor’s Note: This article comes from ‘The V61’ (vikings61.com), a friend and partner of Purple PTSD and Vikings Territory! Check out them out daily for news, analysis, and history of the Vikings!  Follow the V61 on TWITTER here!

After a rough loss in Chicago and perhaps an even rougher week dealing with players and press, the entire Vikings’ organization needs more than a win on Sunday, they need a winning attitude.

With a quarter of the 2019 NFL season in the books, Minnesota is 2-2. Same as 2017, better than 2018.  They now travel to New York, who will be playing without their best player and with a rookie quarterback at the wheel of their offense.

The G-Men, led by former Vikings offensive coordinator Pat Schumer, are a team in the thick of things, as the Vikings are, and their chances of victory over Minnesota are not low.  However, if this game was looked over on paper no more than a week ago, those chances would probably be significantly diminished.

The Vikings had just dominated the Oakland Raiders team with some talent at home, while the Giants had squeaked by a Tampa Bay Buccaneers squad on the road.

This week though–with a bit of suddenness–it’s much more of a contest.

Is it because there is a whisper possibility that Saquon Barkley could return early from an ankle injury and play?

No. Despite the backs remarkable healing powers, Barkely won’t be ready to play by Sunday.

How about wide receiver Golden Tate returning to give rookie Daniel Jones a big-play receiver in this contest?

Maybe a bit.  Tate has a history of remarkable performances against Minnesota, but there’s little doubt that Mike Zimmer and the Vikings’ defense will let him take over the game.

Not really.  The Jints aren’t bad against the run, they just give up more yards and points by the pass. They also haven’t met a  tough rushing team in four games.  The season opener began with the 25-32, 405 yard, four touchdown performance by Cowboys’ QB Dak Prescott in Dallas, where running back Ezekiel Elliott was clearly not needed.  New York then faced Buffalo, Tampa Bay, and Washington, teams without impressive ground games.

The truth is, one of the primary reasons this game is winnable for the New York Giants is the effect many fluctuating variables, both emotional and political, may be having on the Minnesota Vikings team.

These variables are the psychological residue of a woeful offensive performance in Chicago and the subsequent bad press (now we know why they call it the press), the clearly expressed dissatisfaction of two key athletes, and the surly and obtuse behavior of their head coach.

That’s three hits for New York.  Men on base to start this game.

Questions aren’t just lingering here, they are being asked directly–and they need to be answered.

Staying On The Horse

Minnesota is going to lead this game offensively with Dalvin Cook and the run game.  That is one thing that critics and fans and even Viking players can count on. But, once the rubber hits the road on that plan, does Minnesota’s passing stratagem augment it, or get stuck in the mud?

Besides an obvious need for improvement in quarterback play, are teammates receiving that QB–and their instructions–with competitive convictions, or slipping down the pitcher plant of personal frustrations?

If the latter is part of this equation and reality, it is the responsibility of these coaches to make changes in attitudes before performances, and in preparation before execution.

The 0-4 Denver Broncos would love to be 2-2 as they get ready to play the Chargers in Los Angeles. Denver has lost four close games this season and have somehow out figured out a way to do it without being the lead story in the press, unlike the Minnesota Vikings, who have only lost two.

I imagine that their new coach, Vic Fangio, will have them ready to play the Chargers, beat them at home, and improve their team’s record to 1-4.

Mike Zimmer and his intrinsically beleaguered team can do the same.  But they’ve got to be committed to giving their best effort in-house before they come into the Big Apple.  Winning this game has to be the greatest priority for all 53 men on the roster and all members of its staff.

There’s nothing in the NFL world truer than winning solves problems.

With a victory, Minnesota can spy two home games in three weeks and a short trip to Chicago to Detroit to make hay in the NFC North again.  The Vikings will also receive a much-needed bump in the esteem of NFL pundits, enthusiasts, and talking heads.

A loss would entrench their locker room with more pressing questions, about this team, the separation of its players and coaches, and it’s future.