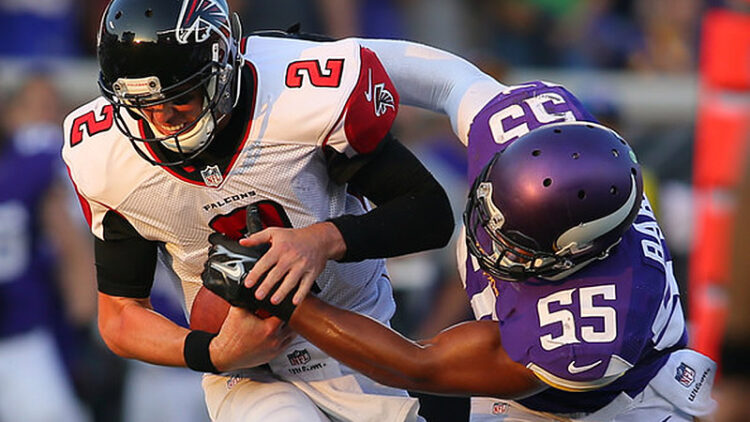 Note from the Editor: We’re extremely honored to be working with Vikings61.com (The ‘V61’) this season! The V61 is a new Vikings news/content site with some of the best writers in the Vikings media landscape, so take a second to bookmark (either literally or mentally) their site and check them out every day when you’re looking for Vikings news. analysis, and history!

The Minnesota Vikings defense began the game on Sunday with the right things–and right plays–in mind.

On the very first play from scrimmage in the football game yesterday, Vikings’ head coach Mike Zimmer sent safety Anthony Harris and linebacker Anthony Barr on blitzes from opposite edges of the Atlanta offensive line.

Three plays later, the Falcons lined up to punt from their own 32-yard line.

Vikings’ linebacker Eric Wilson slipped through the Falcons’ special-teams line and laid out to block the football just coming off the foot of Atlanta’s punter Matt Bosher.

Set up at the Falcons’ 21-yard line, it took Minnesota three plays (despite a holding call on Kyle Rudolph) to make the score 7-0 after the extra point.

Immediately, the game had changed and Mike Zimmer knew it.

Having taken away the first possession advantage Atlanta had (actually flipping it), Zimmer knew that his team would receive the second hand kickoff and have that advantage themselves.

But the play of the game came on that very next first down snap.

Ryan, faced with two blitzers and an inside Viking push, threw an errant ball into double coverage over the middle to Jones, resulting in Anthony Harris’ first interception of the game.

Again starting on the Atlanta side of the field (their 41), it was time for the Dalvin Cook show to start.

In two plays featuring the Vikings’ running back’s obvious full health, Minnesota was inside the Atlanta red zone and a wave of momentum was washing over the team.

The noise in U.S. Bank Stadium–so full you could probably see the purple from space–was now working against a clearly beleaguered Falcon defense.

On his third carry, Cook took a wide zone run left into the end zone, cutting through the Atlanta D like it was a Division II college team.

14-0. With over eight minutes left in the first quarter, this game had the whiff of a blowout.

The teams then traded possessions, while the Falcons’ offensive coordinator Dirk Koetter played a little chess with the Vikings’ Zimmer.

Koetter quickly lost his Queen when running back Atlanta RB Devonta Freeman, just outside of the Vikings 20 yard line, was hit hard by Vikings’ corner Trae Waynes, sitting in a short zone position.

The ball came loose and the Vikings recovered.

The Vikings’ then again rode Dalvin Cook and his backup, Alex Mattison, as they drove 80 yards to score, making the game 21-0.

With four and a half minutes left when the half, the frustrated Falcons came away with nothing on their last touch of the ball, stymied by zone coverage, well-timed Zimmer blitzes, and their own penalties.

A Fine Way To Begin–And Continue

Starting–and ending–a half of football like this makes it almost impossible for an opponent of Zimmer’s defense to recover from, especially with the talent this coach has assembled to play the roles in his scheme.

Now–is it back to the drawing board as Minnesota plans for Aaron Rodgers and the Green Bay Packers next week in Lambeau Stadium, or will Zimmer use a blueprint of what was seen against Atlanta on Sunday?

You certainly won’t know by asking him, but you can bet he’s got some idea.

What fans can be excited out is the very pleasant surprise of seeing a complete game of complementary football played by Minnesota yesterday. The defense made plays, and the offense followed, resulting in a dominating week one win.

No one would pass on that next Sunday.