Zimmer vs. Sloter: Why Everybody’s Right 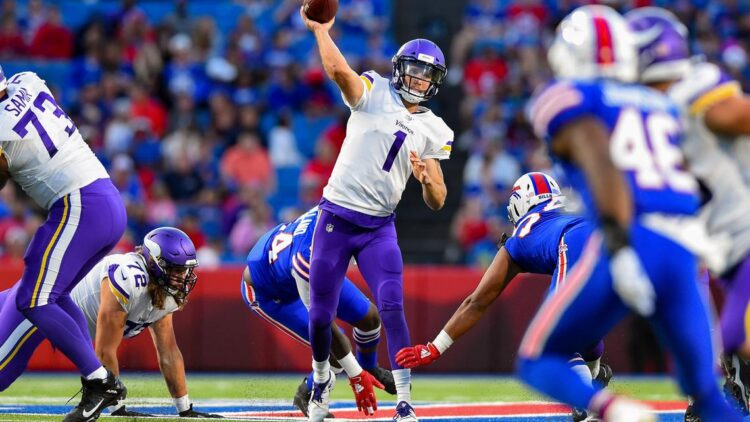 In a league where even the finest players are cut for many reasons, Kyle Sloter’s pink slip has put Viking fans at odds with both each other, and Sloter’s now former coach, Mike Zimmer.

After the 2000 season, the San Francisco 49ers cut Jerry Rice.

After 16 seasons of setting every offensive record in the NFL book from his position, somebody in the San Francisco executive office decided it was time to move on from the 38 year-old wide receiver, despite his remaining skills, his legend, and his three Super Bowl championship rings.

The point is: cuts are made in the NFL by coaches in the perceived benefit of a team.

Whether or not that cut indeed improves the team’s chances of winning cannot be measured on paper or by political argument.

In the case of former Vikings’ reserve quarterback Kyle Sloter, these arguments are indeed being made that way.

In an excellent article in the Daily Norseman titled “Does Performance Matter To Mike Zimmer?”, a fine writer named wulford makes several excellent points about the relationship between Sloter and Vikings’ head coach Mike Zimmer, and the responsibility of a head coach to field players that can win on the field, despite their potential differences.

Not only does wulford disseminate Zimmer’s rather curious comments about Sloter’s performance as a sub-par practice quarterback, he also contrasts them with anecdotes and coaching practices from the likes of legendary leaders like former Vikings’ Bud Grant and the Patriots’ Bill Belichick.

First, Grant, in regard to forming his roster:

“I’ll decide who makes the team, who starts, who plays. I could look at film and get as much out of it as a guy who sits down for four hours and documents everything, puts it in a computer and spits out tendencies. I relied more on what I saw and what I felt. It was not 100 percent accurate, but it was in my gut. I knew who the best players were, and I didn’t need three weeks of training camp with a bunch of rookies to tell who the players were. That’s what I was getting paid for.”

Of Belichick and his method of operation in evaluating players, wulford then writes in his own words:

‘First, Belichick is a big believer in preparation and practice. How you practice is usually indicative of how you’ll play in a game. But preparation goes well beyond practices, which are intense.
Extensive film study of opponents, scheme, tactics, tendencies, and game planning are high on his list for himself and assistant coaches. A battle is won or lost before it’s fought.’

With references to the ‘Art of War’ leading the way, the only problem with the argument of this well-written essay is that its facts sometimes bite back upon its sentiment.

Indeed, we clearly agree that Kyle Sloter is a better game quarterback than Sean Mannion (just as he may have been better than Trevor Siemian last year), but by boldly creating a counterpoint to Zimmer’s obstinate behavior regarding Sloter, he illustrates two essential truisms when it comes to players and coaches.

One: practice makes perfect so be perfect in practice.

Two: the head coach is the Boss.  Boss with a capital ‘B’.

The prevailing question here seems to be whether or not Kyle Sloter deserved to have a shot at the number two spot.

A lot of Viking fans thought that he should, but the census of the Minnesota Vikings’ offensive coaches, and ultimately, Mike Zimmer, did not.

Why? Because despite leading his team of reserves down the field with some regularity, he failed at practice, the number one requisite of finding your way onto a professional football field.

If, as wulford points out, Bill Belichick is an uncompromising believer in preparation and practice, then Sloter most likely wouldn’t have passed the Patriots first round of cuts.

As for Bud Grant–and Belichick certainly as well–Kyle Sloter’s recent comments to the press, though paraphrased here, deliver an emotional context that would never be tolerated.

“I think that there’s a pretty clear reason why practice isn’t necessarily always 100 percent smooth is because I’m not out there getting the reps.”
“I’m a rhythm player. I feel like I’m a pretty instinctual player. I feel like when I get in the flow of the game … it’s easier to make throws rather than throwing one ball and then waiting 45 minutes to throw another.’’
“I’m just kind of tired of that narrative (that he’s not a good practice player) because I’m a good player, and at the same time the (practice) reps are the way they are. It’s tough when you’re not getting as much work as some other guys.”

Once said, Kyle Sloter could have the talent to throw the ball like Jeff George and run like Michael Vick and he wouldn’t get bus fare back to his parent’s home in Atlanta once he had turned in his playbook to Bud Grant.

But That Dude Could Play

There’s a larger picture here.  And it explains the reason why so many Viking fans are ultimately disgruntled about Kyle Sloter being waived.

The guy really looked like a winner out there.

With a starting quarterback who was paid to the tune of $84 million dollars guaranteed, has a record against winning teams that is 4-24 (0-5 in 2018), and a team that has had two enormously disappointing seasons in three years–yeah, a lot of folks were rooting for Sloter.

For reasons they all have in common.  They want a winning team and a winning quarterback.

Not only should they not be blamed, they should be recognized.  For in this popular game they are the voters. The people who buy and watch and remain the future of the franchise.  They get to think what they want.

If they perceive that the Sloter cut was personal and not professional, the only way that perception will be dispelled is by the Minnesota Vikings winning football games.

That would probably seem fair enough to a fellow like Jerry Rice.

If Mike Zimmer is interested, he can start on Sunday, September 8th, at noon.