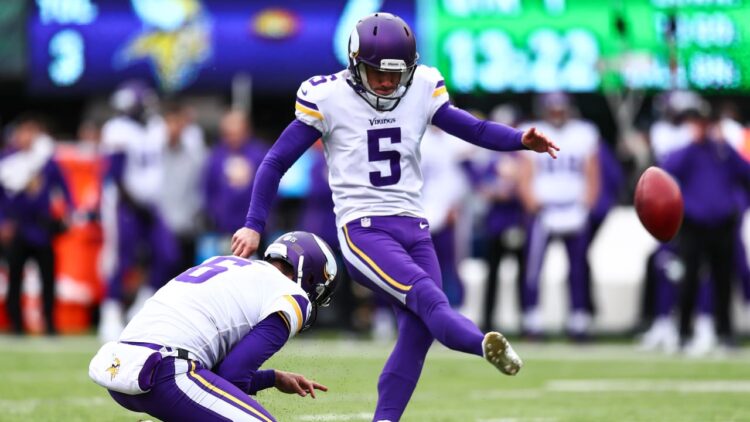 In 2019, Dan Bailey certainly has either exorcised his kicking demons or learned to live with them.  He’s made eight of nine field goals for Minnesota and has already bagged an NFC Special Teams Player of The Week award.

Mike Zimmer and the Vikings’ front office have now placed their bet on Bailey for this year’s ride.  It is almost strangely quiet around Bailey’s unit these days, with none of the pressing question usually in the air.

Funny how making your kicks brings along that hush.  Most kickers and special teams coaches seem to like it.

Before he became a Minnesota Viking, Dan Bailey was a fine kicker for the Dallas Cowboys for seven seasons. In fact, he was one of the all-time best.

In 2015, Bailey was selected as a First-Team All-Pro after making 93.8 percent of his field-goal conversions.  In 2016, he made a mortal slip to making about 84 percent of his kicks.

In 2017, he dropped ten more percentage points before tearing his groin in the second half of the season. He missed four games and struggled with easy kicks once he had returned.  Even as Bailey struggled making kicks early in the Dallas Cowboys’ 2017 training camp, Dallas’ head coach Jason Garrett wasn’t overly concerned.

“With Dan, it’s a body of work,” Garrett told the Forth Worth press, “he’s been such a good player for us for so long.”  Then, Garrett plugged: “We feel great about him”.

Then, Bailey got cut by the Cowboys’ front office.

Once he was waived by the Dallas, Bailey cooled his heels and trained for his hobby of cross-endurance competition until the Vikings came to call.  Minnesota had become dramatically disenchanted with their rookie kicker Dan Carlson, and had likewise fired him after several almost unbelievable regular season misses.

On the 2018 season as a Viking, Bailey stood pad on his 75% performance of the previous year.  What was disconcerting for Minnesota (still mooning over his career accuracy numbers), was Bailey’s 4 for 9 conversion rate from 40 to 49 yards.

Those are pretty common NFL kicks to make, and Bailey wasn’t making them.

To start his career in Minnesota, Bailey missed two of three kicks, from 28 and 45 yards, during a dramatic win over Philadelphia in week five.  In week 8 against Green Bay–another close game won by Minnesota–he missed another two of his three field goals attempted.

Bailey then missed kicks in New England in Seattle in consecutive weeks 13 and 14, two games in which the Vikings’ offense struggled for points.

In the off-season, the Vikings’ front office plodded and plotted about their kicking situation.  Who could replace Bailey? And was it worth replacing him?

Bailey came to OTA and training camp and began working with his new special teams’ coach Marwon Maalouf.  The press made daily notes of Bailey’s inaccuracy in practice and it looked like the goat was still in the room.

“It takes a little time for those guys to get their rhythm back,” Marwon told the Star-Tribune after a day in which Bailey missed three of seven attempted field goals in practice.

Of course, no one believed that, most especially Vikings GM Rick Spielman, who then abruptly traded a fifth-round draft pick at the end of the preseason to the Baltimore Ravens to bring in Norweigen kicker Kaare Vedvik.

Vedvik, a tall, powerful young athlete who was kicking well behind the Ravens’ stalwart Justin Tuck, looked good in purple, but was abysmal on the football field.

If he made any of the kicks he lined up for, most folks don’t remember them.

Quickly, Vedvik was yanked and Dan Bailey was reinserted.  From there, it seems he decided to make another go of the ‘accurate NFL kicker’ thing in the preseason, hammering three long field goals against the Buffalo Bills.

And that was kind of all she wrote.  Vedvik got cut and Bailey reclaimed his job on what might be considered a permanent basis.  But at that point, not many could make that official.

Since that time, Bailey looks like he’s been cut right out of the 2017 version; a downright reliable placekicker that is saving fingernails throughout Minnesota.

Is it the fact that new Vikings’ punter is a better holder than the guy he replaced in Matt Wilde?

Who knows?  The existential logistics of NFL placekicking sometimes seems beyond the kickers themselves.  It most certainly is beyond the minds of Minnesota Vikings fans.

All we ask at this point of it all is to be able to watch the kick when the snap comes out, and not have to look away.

For now, we can thank Dan Bailey for that.