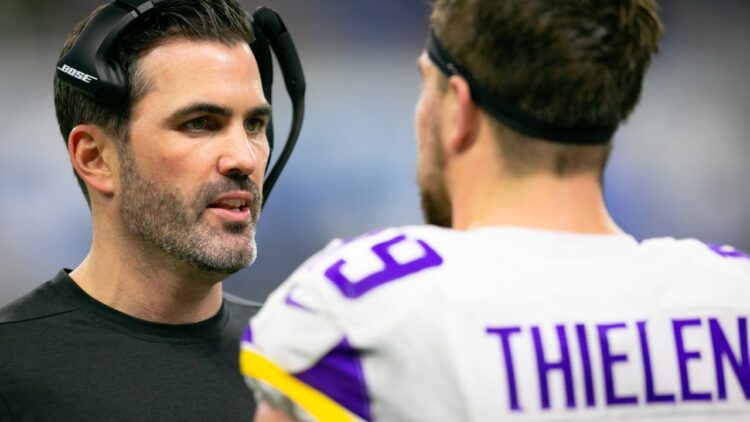 Note from the Editor: We’re extremely honored to be working with Vikings61.com (The ‘V61’) this season!    The V61 is a new Vikings news/content site with some of the best writers in the Vikings media landscape, so take a second to bookmark (either literally or mentally) their site and check them out every day when you’re looking for Vikings news. analysis, and history!

All Minnesota Vikings’ quarterbacks were fairly efficient at US Bank Stadium last evening, resulting in a relatively easy preseason win over the Seattle Seahawks.

Sure, there were a few warts in last night’s exhibition win over the Seahawks, but that’s one of the reasons we have the preseason, right?

For starters, the Vikings only went 11-18 on third down.

That’s not a disaster (and considering the Seahawks went a mere 4-12, maybe a win by counterpart), but clearly something with room for improvement.

But, on the night, Mannion was a solid 11-14 for 88 yards and a touchdown. He also had his team into the Seattle red zone at the time of the pick. Can he get a break?

Not likely.  Mannion’s popularity among Vikings fans is clearly waning.  This is the result of his own understudy, Kyle Sloter, who has now entertained the local masses with remarkable preseason play for the second year now.

Despite spending some time in Mike Zimmer’s doghouse during training camp, Sloter is now 17-20 with two touchdowns and no interceptions in two preseason games of 2019.

This, after an NFL starter-like performance last preseason, where Sloter made plays all over the field, including a walk-off touchdown dive for a Viking victory against these same Seahawks last August.

Captain Kirk To The Bridge

As for Cousins’ himself, some things to examine.

After fumbling on a center exchange in the Vikings first possession (recovered by Minnesota), Cousins took the Vikings’ down into the Seattle red zone on his second.

This second drive, resulting in a short (and successful!) field goal by Dan Bailey, was fueled by the strength of two long passes to Adam Thielen; one which resulted in a brilliant over-the-shoulder catch, the other which produced a pass interference call on Seattle corner Tre Flowers.

On the fumble, there’s some cause for concern.  Let’s remember that Cousins led the league in turnovers last year and beginning the second preseason game with a first possession fumble is dicey, no matter who’s culpable.

However, the fact that Cousins pushed the ball down the field with big throws is intriguing in a very positive way.

We all remember Adam Thielen and Cousins shouting at each other on the sidelines of a Vikings’ game last season.

Without confessions by either player in regard to their actual dialogue, it became clear that Thielen was upset that Cousins was oft times holding the ball in a collapsing pocket rather than giving his wideouts a chance to make catches in coverage.

It seems that Cousins may be–for now–willing to take those chances.

In an exhibition game where starters only played two series, the Vikings outclassed the Seahawks on the stat sheet.

Clearly, John DeFilippo is no longer calling the plays here.

Both Vikings’ running backs Alex Mattison and Mike Boone showed that they were eager to roll their sleeves up and dig out tough yards, no doubt proving a point Mike Zimmer is determined to make about his team.

And into the real mud–some respect for Vikings’ fullbacks C.J. Ham and Khari Blasingame.

In a league with few fullbacks left, this tandem shows promise to change that trend. Each man showed resolve in finding a defender to hammer on the offense’s developing zone-run scheme, and, with aplomb, both took the ball themselves into the line when called upon.

On a fourth-and-one in the first quarter, Ham punched through the Seattle first team defense for three yards and a healthy first down, while Blasingame later sealed the Vikings’ win with a goal-line punch-in-the-mouth touchdown in the fourth.

There’s not much ‘Hollywood’ in plays like that, but there is a happy offensive line and a group of satisfied Vikings’ coaches.