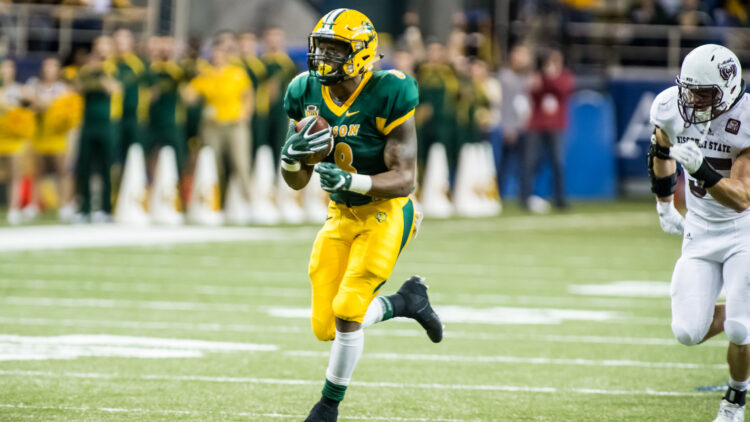 The Vikings will be looking for help in the backfield following the departure of Latavius Murray and the charges against Roc Thomas. That leaves Dalvin Cook and Mike Boone as the the backs left on the roster, along with fullback CJ Ham. The biggest thing that Minnesota will be looking to replace is the power that Latavius Murray brought to the position. A power back will be necessary to complement Dalvin Cook’s elusiveness. That back could be right in the Vikings’ backyard.

North Dakota State’s Bruce Anderson doesn’t have the size of Latavius Murray, but he does have a good frame, and could put on some more muscle with the help of NFL level nutritionists and strength coaches. Anderson ran for nearly 3000 yards in his 4 years at NDSU, while finding the endzone 33 total times. His versatility was on show too, of his 33 touchdowns, 24 came on the ground, 7 through the air, and 2 on kick returns.

Possibly the best part of Anderson’s game is his vision and patience. Playing behind a very good offensive line, Anderson honed his skills for reading the defense and patiently waiting for his opportunity to strike and slip through a seam. It’s a bit of a double edged sword though, Anderson will need to be more decisive at the next level, especially if he wants to be a power back. Patience is great, but he will need to know when to take what he can get against NFL defenses. Dancing doesn’t work in the NFL unless you are very shifty. Anderson has a bit of wiggle, but he certainly won’t be breaking too many ankles in the NFL.

Perhaps his most underutilized skill at NDSU was his ability to catch the football. Although he had 7 receiving touchdowns, he never broke 200 yards receiving in a season. However, he has the hands and ability to become a useful receiver, something that gives any NFL running back more value. If Anderson can show of his receiving ability, and become a better blocker, he could be a dangerous weapon to slot in at any time of the game.

Speaking of Anderson’s blocking ability, he has the frame and effort to become and effective blocker, but he will need to work on his footwork. His effort gives him the potential to improve in all necessary areas and be a very solid player. However, their will be questions of whether he can be a true workhorse back when facing NFL competition. Anderson won’t need to be a workhorse if he lands in Minnesota, who should be able to run a stable of backs.

As of now, Anderson is projecting to go in the 4-6 round, which lines up nicely with where Minnesota might be looking for a back. I’m not sure what other teams will be targeting Anderson, who wasn’t able to participate in the NFL Combine, but will be looking to turn heads, along with quarterback Easton Stick, at NDSU’s pro day on the 28th of March. Somebody from Rick Spielman’s team will surely be in attendance and keeping a close eye on both Anderson and Stick. With the proximity to Minnesota, and Anderson’s skill, he will surely be a target on the Vikings’ board. The question is, will somebody else take Anderson before Spielman can?

Likelihood the Vikings are targeting him: Very Likely

Likelihood the Vikings could land him: Very likely, assuming another team is not too hot on him and reaches

Biggest Drawbacks: Ability to get north and south when needed, blocking at an NFL level, handling a full workload