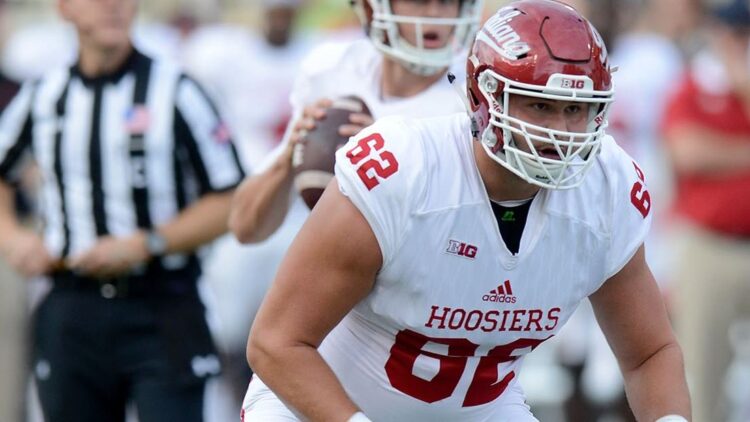 Project tackle seems to be a dirty phrase to Vikings fans. There are countless examples of guys who received this label and did not pan out. TJ Clemmings is a name that Vikings fans might still shudder when they hear. Clemmings was a project tackle who never got his time to develop after he was thrust into a starting role when Phil Loadholt sustained an achilles injury. Clemmings didn’t have the physical tools, and was often injured leading to his release from the Vikings, Redskins, and Raiders.

People don’t like project tackles, but Clemmings suffered from being in the limelight out of the gate when he was a fourth round selection. Brian O’Neill might end up in the same boat if he doesn’t live up to his second round pick status. Well, project tackles aren’t all bad, especially depending on when in the draft you can snag them. Enter Brandon Knight, offensive lineman, Indiana Hoosiers, and project tackle.

Knight started his time at Indiana as a tight end to provide the Hoosiers with extra blocking, and played in 11 games as a freshman while also catching a touchdown. He missed time in both his sophomore and junior seasons to leg injuries, but played and started all 12 games as a senior earning himself honorable mention all-big ten.

When you watch tape of Knight, you kind of start to understand that maybe he’s not a true tackle. He has the footwork and the ability to stay in front of most rushers, but he gets set up for counters too easy because he leans too much. He also loses against bull rushers who power past him. He does have the feet to be a tackle, but he doesn’t have the pop in his hands or the anchor point to hold guys out of the pocket.

So, maybe Knight isn’t a project tackle after all. Maybe he is truly a project center. His lack of pop and power would be a problem at the guard position just as it is at the tackle position. However, he has the intelligence to learn to command the line, and the footwork to be a good zone blocking center. So, if the Vikings are committed to their new zone blocking scheme, they should be looking for depth who can become good zone blockers. Knight has the physical tools to backup Pat Elflein, and maybe even play some tackle if they employ a three tackle package.

Knight is projecting into the sixth round or lower, making it possible for the Vikings to pick him up if nobody is above him on their board. Certainly you can never have too many offensive linemen, and especially not when they fit your scheme like Knight could. This project linemen could be just what the Vikings are looking for to build future depth.

Likelihood the Vikings are targeting him: Highly likely

Likelihood the Vikings could land him: Likely

Biggest Drawbacks: Does not have the arm length of a prototypical tackle, lack of power, project lineman