Vikings Can Beat Bears By Playing Some Improv 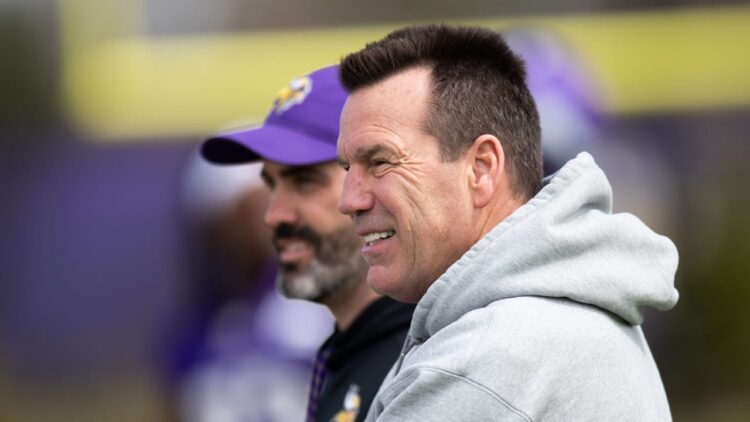 Though the Vikings have league’s leading rusher in Dalvin Cook, the idea of running right at the Bears on Sunday is not a winning one.

Last year, in week 14, the NFL’s number one offense, the 11-1 Los Angeles Rams, came into Soldier Field to play Chicago.

Los Angeles was averaging 32.6 points a game over 12 games of the 2018 season, and Sean McVay‘s offense had recently won a 54-51 shootout over the Kansas City Chiefs two weeks earlier.

Of course, McVay and his quarterback, Jared Goff, simply thought they would just “do what they do” against Chicago., Tthrowing the ball 45 times against the NFL’s best defense, while running only 13 times.

The Bears ate that offense–and that offensive plan–like a glazed donut. Passing yards for the Rams, 162, third down conversion rate, 3-12, quarterback rating 19.1.

Jared Goff will never have another game that bad unless he plays into his 50s and lands a starting spot with the NFL’s worst offense.

The Vikings will travel to Chicago later this week to play an afternoon game on the second slate.  3:25pm will be Prime Time in the NFC North.

Despite Minnesota far exceeding the expectations of its run game in 2019 as having the league’s yardage leader in rushing, Dalvin Cook, the Vikings should not make the same mistake L.A. did last year when coming to Chicago and simply putting their chips on the table.

The idea of putting that running attack forward as the nucleus of their game plan may seem sane, but it is also likely anticipated, and will be a grave mistake in the chess of this contest.

Chicago’s defense is allowing a remarkably stringent 3.1 yards per carry this year. After 432 attempts, that is a sample size big enough to prove to Vikings’ offensive coordinator Kevin Stefanski that a top-ranked Vikings’ rush, per se, will not suffice on Sunday to push the Bears off their ground.

If the Vikings try and establish the run and fail, Minnesota will fail in this game, whether or not they control Bears’ head coach Matt Nagy‘s small-ball, misdirection offense.

Why?  Because if Chicago has the confidence to believe they can stop the run by controlling the line of scrimmage like they did in two games last year, and control the rushing perimeter (which they certainly have the athletes to do), Minnesota will fall right back into the pitcher plant of becoming a one dimensional offense, the malady they suffered through several times last season.

That one dimension–the pass–has not served the Vikings as well as anticipated this season. In week three at Lambeau Field, the Vikings’ offensive line did not play well as a unit and quarterback Kirk Cousins was amiss on throws, with and without a clean passing pocket, throughout the game.

To date, the Vikings’ passing game has generated 494 yards in three games, 31th first in the NFL, and seen its second ace wide receiver Stefon Diggs pull in a mere six catches.

Is Diggs limited with a slight hamstring injury? It’s possible. But regardless, it is what it is. The Vikings’ passing game is way off it’s 2018 mark. Chad Beebe, who may be changing his name soon to “Mr. Glass”, will offer no help after a recent torn ligament in his ankle, and Bisi Johnson has yet to be given an opportunity in the offense.

Yes, the Vikings have re-signed Laquon Treadwell, but forgive us–and the Chicago Bears–for not re-drawing our perspectives on this contest because of it.

So–how do the Vikings pull off a win in Chicago?

By doing what the Packers’ new head coach, Matt LaFleur, did to Mike Zimmer‘s defense in week two–keep the Bears off balance.

That means using those pages of the Vikings playbook that coincide with the Bears method of operation. Using a “gadget” misdirection offense that uses the Bears’ speed against them, and get the ball out quickly to skilled players on play fakes that begin with run formations.

Forgive the casual, “easier said than done” analysis, but it’s also time to Kevin Stefanski and Gary Kubiak to look over the history of algorithms in crucial game play selections of the New England Patriots.

No, this is not a call to “do what Brady and Belichick do”, but simply a strong notion to review the success New England has had in changing offensive game patterns.

Unfortunately, the Vikings don’t employ a corps of players like Chicago’s hybrid RB/WR Tarik Cohen, nor the Patriots’ James White, but they do have two unique wide receivers who are comfortable with option routes and a running back that works well in space.

Get creative. With Cook, Thielen, Diggs, and a rookie name Smith, Jr. Perish the thought, Kyle Rudolph might even appear for more than one play in the game these days. He’s certainly being paid enough.

If Minnesota begins the game with a high percentage play-action passing game, couldn’t they return to their zone rush game once the Bears begin to adjust to it?  Do they ever run a trick play (flea-flicker) like the one that scored a quick TD on them last week against Oakland?

You’ve got to get this Bears defense off its blocks. It’s too good to beat it by matchup. The Vikings will fail at the interior line, wherever Kahlil Mack lines up, at linebacker (where a lead-footed Kyle Rudolph cannot roam), and even into the defensive backfield where Chicago employs two First Team All-Pros in corner Kyle Fuller and safety Eddie Jackson.

Recap: In a week 11 game last year, Cousins, under pressure in the second half, threw a pick six to seal the game for Chicago. In week 17, he was sacked four times, as the Vikings’ offense went 1-11 on third down and the Vikings held the ball for less than 23 minutes of the 60 minute game.

Without changing their script, the Vikings will put this game into the hands of Dalvin Cook, who is wonderful but not that extraordinary, or Kirk Cousins, who is downright predictable under such circumstances.

Matt Nagy’s offense, like Andy Reid’s before it, has often been called “death by a thousand papers cuts”. It’s time for Minnesota to cut Bear claws in the same way. The run game can hold court on the chess board, but it should be a pawn to start and a knight to finish.

The Pitch Against Mitch

Meanwhile, the Bears’ offense won’t be jumping up on anyone with quarterback Mitchell Trubisky at the wheel.

Chicago is completely abandoned its power running game with the trade of running back Jordan Howard to Philadelphia, and now relies on the darting talents of tiny Tarik Cohen and rookie David Montgomery, who is hardly the tackle-breaking machine he was advertised to be.

The Bears will trot out the league’s 29th ranked offense on Sunday to face a Minnesota defense that has played nearly masterful defense in all but one quarter of three games in the 2019 season.

The chess match begins with a Viking offense, powered by a refortified running game, meeting a defense that’s even better on their home field.

Minnesota wins by using that run game, but loses by depending too much upon it.