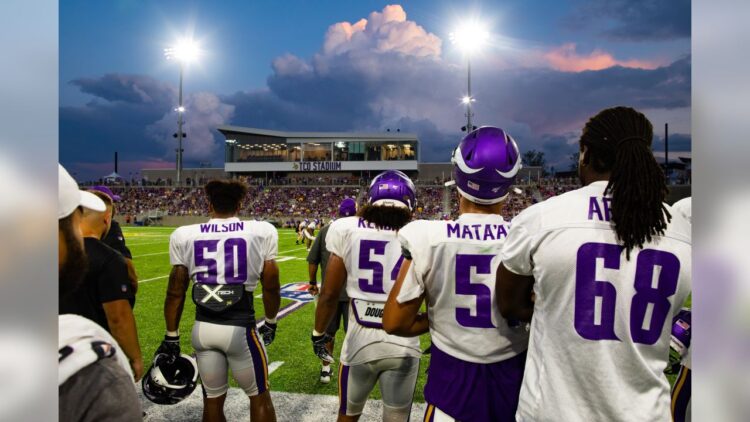 From the outside looking in, it may have seemed like a quiet offseason for the Vikings. Beyond re-signing Anthony Barr, there were no major signings in free agency, the team didn’t lose any superstars and the core personnel remained quite similar to last year. Yet, behind the steel curtain, a lot went down.

A brand new system was implemented on offense, the coaching staff was revamped, 12 players were drafted,  a handful of standouts were scooped up from the AAF and a whole lot of competition was created on the roster. On Monday, a couple of weeks into training camp, the team released its first depth chart of the season. The culmination of the club’s offseason work provided a glimpse into the construction of the roster.

Most of the starters have already been established and a few players have been penciled-in as backups, but many positions are still undecided. Let’s take a look at a few of the position battles worth keeping an eye on during the Vikings’ first preseason game of 2019.

Sean Mannion is the current QB2. Of the quarterbacks currently on the roster not named Kirk Cousins, Mannion has the most regular season experience. He’s played pretty well in training camp and hasn’t made many mistakes, but general manager Rick Spielman recently said the QB2 competition is wide open and will be determined throughout the rest of training camp and the preseason. Will Mannion start to separate himself from the pack?

Kyle Sloter has played lights out in games that unfortunately don’t count. In training camp he’s been able to connect on some nice passes but overall he’s been inconsistent. Recently, the 25 year-old even took heat from the head coach for not playing well enough in practice. His preseason track record proves he is certainly capable of making big plays. But, can he continue to shine in the preseason and level-out his performance in practice to appease the coaches? That’s something he may need to do in order to secure a spot on the final 53.

Jake Browning has been the biggest surprise in camp among the quarterbacks. Looked upon as a potential first-round pick after his sophomore season at Washington, Browning faded after having shoulder surgery on his throwing arm in 2016. The next two years his numbers weren’t as impressive, but Browning still finished his Huskies career as the winningest quarterback in Pac-12 history, with a 94:34 TD/INT ratio and 16 rushing touchdowns.

Unlike Sloter, who has more of a downfield gunslinger approach as a passer, Browning consistently hits his check-downs on safe, smart throws. His performance in camp has led to him split QB3 reps with Sloter. He may not get a ton of playing time on Friday night, but an effective performance could mean increased snaps or even a change in the depth chart moving forward. The 23 year-old certainly has the most to gain in the battle for QB2.

If you haven’t heard yet, the consensus opinion that emerged from training camp was Chad Beebe will be the WR3 if healthy. The depth behind him, however, is anything but certain.

Jordan Taylor, Laquon Treadwell, Bisi Johnson and Brandon Zylstra have all received first-team reps during training camp. Dillon Mitchell, Jeff Badet, Alexander Hollins and Davion Davis have not. Still, you can’t rule out anything at this point. They’ve all shown flashes and each one of them is capable of contributing on special teams.

Johnson has begun to separate himself from the younger wideouts in camp, but will that continue under the bright lights of the Mercedes-Benz Superdome? And how will the “vets” perform? With only two or three spots up for grabs between eight players, we’ll see who’s able to stand out against the Saints and improve their stock by getting off to a hot start in the Big Easy.

I’ll be keeping my eyes on Dillon Mitchell, who seems to be improving each day in practice.

There are battles being fought behind starting guards Pat Elflein and Josh Kline to determine the backups.

Dakota Dozier, 28, has started 7 games in his career. He filled in at 1st-team right guard when starter Josh Kline was given a veteran’s day off in camp. The next man up was Danny Isidora, who is entering his third season with the team. Isidora, 25, was 5th-round pick in 2017. He’s started 3 games in his first two NFL seasons but hasn’t been able to secure a larger role at guard. He’s had a strong camp so far, but he’ll need to keep playing well in order to hold off 21 year-old rookie Dru Samia.

The five projected starters, Riley Reiff, Pat Elflein, Garrett Bradbury, Josh Kline and Brian O’Neill are essentially locks to make the team. Rashod Hill, Aviante Collins and Brett Jones (who can also play guard) are also likely bets to make the team. The Vikings generally carry nine or ten offensive linemen. That leaves only one or two vacant spots for the four players listed above.

The Vikings brought back Shamar Stephen this offseason to man the three-tech spot next to nose tackle Linval Joseph. Stephen began training camp on the NFI (non-football injury) list, but was cleared to practice last week.

Jalyn Holmes and Hercules Mata’afa filled in for Stephen while he was out. Holmes is currently listed ahead of Mata’afa on the team’s depth chart but both players have seen extensive first-team action. Holmes and Mata’afa are each just 23 years old. Considering their vastly different skillsets, it’s possible the team rosters both of them.

The three locks to make the team at defensive end are the two starters (Everson Griffen and Danielle Hunter) and top reserve Stephen Weatherly. After that, we have a battle. Ifeadi Odenigbo has been a standout in training camp. The problem is Karter Schult, too, has excelled. We’ll see if either player is able to make the most of their opportunities and gain some momentum on Friday night. Stacy Keely, Anree Saint-Amour and Ade Aruna are also among the competition at defensive end.

The CB competition should be worth watching all preseason.

Holton Hill is suspended for the first eight games of the season and Mike Hughes is still on the PUP list recovering from a knee injury. Behind Xavier Rhodes,Trae Waynes and Mackensie Alexander on the depth chart, the Vikings lack regular season experience.

Bené Benwikere was signed last Saturday to add a veteran body at cornerback. Also combatting the youthful depth, Paul Allen recently said on his radio show that the team has been using Mackensie Alexander on the outside in recent practices. The move suggests players such as Jayron Kearse, Marcus Epps and Benwikere would be used in the slot if and when Alexander is needed on the outside. Alexander’s versatility should help ease the team’s concerns at cornerback, at least until Hughes is able to return from his injury.

Based on the fact that Holton Hill doesn’t count towards the team’s active 53-man roster while he’s suspended, as well as his strong performance in training camp, it’s looking more likely that he will make the team and be kept on the reserve/suspended list while serving his eight-game suspension. So long as he stays out of trouble…

Kris Boyd recently received praise from Mike Zimmer for performing well in camp. He appears to have a strong chance of landing on the regular season roster. However, a lot will depend on his preseason performance. Boyd is competing against Benwikere, Meadors, Duke Thomas (the former AAF’er) and Craig James (the former Minnesota Gopher) for a spot in Zimmer’s secondary.