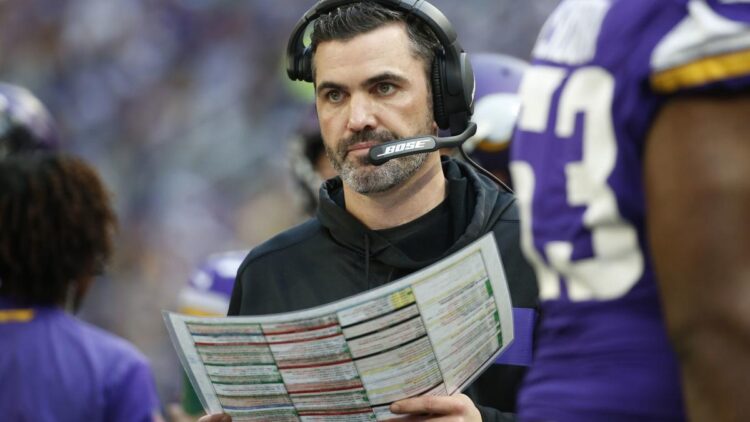 After the Vikings tough loss to Green Bay on Sunday, quarterback Kirk Cousins got most of the blame. Some should be shared by his new offensive coordinator, Kevin Stefanski.

While Cousins wasn’t exactly showered with accolades, he wasn’t considered the primary reason the Vikings so disappointed fans with their offensive play in a season which ranked them 19th in total offense, 26th in 3rd down conversions, and 21st in points in the red zone.

No.  The culprit there was the Vikings’ offensive line. Minnesota couldn’t run the ball, couldn’t pass block, etc.  Whatever the rationale, Kevin Stefanski was made Minnesota’s new offensive coordinator officially after the season ended.

A year later, after two games, the Vikings’ running game is second in the NFL in yards, first in touchdowns, and their chief running back is averaging 6.5 yards a carry and 132.5 yards a game. But in a contest where the Vikings rushed for 198 yards, the Minnesota offense was for 4-13 on third downs against Green Bay and 0-2 on points in the red zone.  Cousins was 14-32 on the day with a QB rating of 52.3.

Indeed, it’s fairly rational to see Vikings’ fans ready to run Cousins out of town on a rail after only two games, but perhaps a strong argument could be made for sending his coach out with him–or maybe just in his place.

New Minnesota Vikings offensive coordinator Stefanski is a young and good-looking guy.  He has a formidable beard. He is intelligent, well-spoken and shows character and diligence whenever he presents himself.

But what else is he? What else has he really done? Who has he coached under, learned from? What are the principles of his game-plans as the Vikings’ new offensive coordinator?

What does a quarterback coach do?

He works on everything in a room and a practice field that usually consists of no more than three players. He concentrates his attention to one, the starter, making sure he is the best player he can be on Sunday.

Kirk Cousins connected on just over half of his passes yesterday, he fumbled the ball twice (one recovered by Minnesota on a third-down run), and threw two interceptions in a game where the Vikings’ defense had to play mistake-free football for three full quarters to give their team any chance of winning.

After the game, Cousins stood at the press podium and humbly took his licks, just as he has numerous times before after close losses in which he’s played poorly.

Thanks, Kirk. Gotcha. But we’d like to ask your offensive coordinator a few questions.

Coach Stefanski–where are your tight ends? Aren’t these the guys that often bail out your quarterback in pressure situations?

Coach Stefanksi–do you rehearse pressure scenarios with your quarterback and practice? Through training camp? What is your quarterback learning about using any part of the pocket to his advantage? Or securing the ball when he has to move, run, or even when he’s looking downfield?

Coach–why has Cousins been having problems with his accuracy?  In preseason game three, in week one, and yesterday, this quarterback left big plays and points all over the field with errant passes, no?

Coach–what is your wide receiver three and four situation?  Sure, it was a nice play by WR Chad Beebe on that broken field catch-and-run, but one catch in two games?

Coach–it is our impression that new offensive coordinators often have the advantage over veteran defensive coaches with their innovations in offensive designs because there is some variable or new creative approach in their playbooks that these coaches have not seen. We’ve witnessed little of that. Could you comment?

Coach Stefanksi–you’re at the point of developing, as well as communicating, an offensive football stratagem at the highest level possible. You are attempting to do so against opponents with the highest level of acumen and physical ability.

All due respect, sir, is this the job for you?