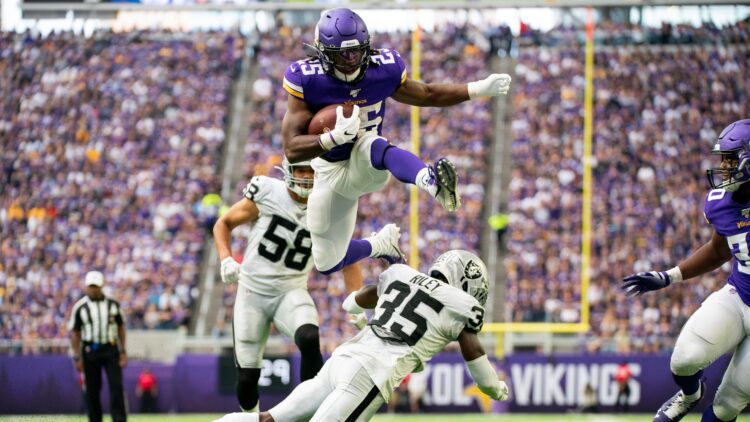 Last year under John DeFilippo, the Vikings had the second-least explosive offense in football.

Through three weeks of 2019, the Vikings currently have the most explosive offense in football.

How did they go from second-worst to first?

Dalvin Cook Is Playing Like the Best Running Back In Football

There are a lot of good running backs in the NFL right now, but through three weeks Dalvin Cook has been in a league of his own.  Cook currently leads the league in rushing yardage, yards per attempt and PFF grade, each by a wide margin: 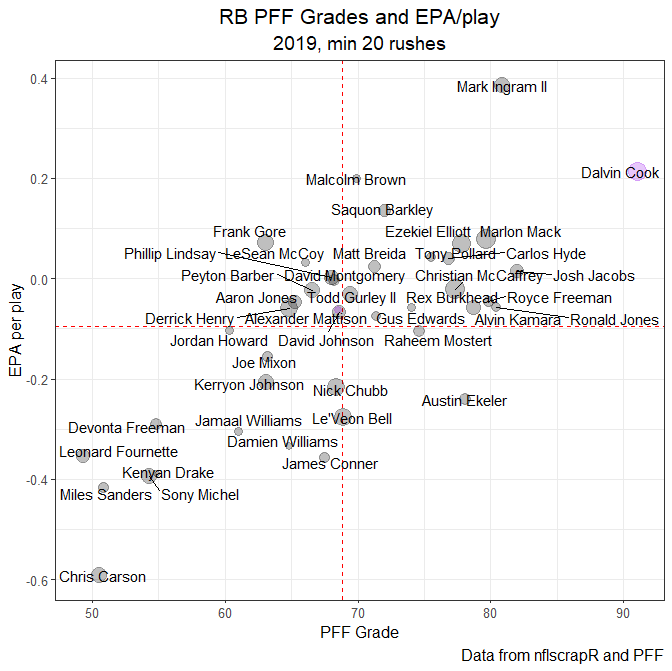 That elusiveness pairs well with Stefanski and Kubiak’s focus on outside zone running, since the Vikings have been particularly effective blocking at the second level.  Bradbury and Elflein have been excellent releasing upfield to seal off linebackers, and C.J. Ham and Irv Smith Jr. have been unsung heroes in how they have consistently enabled Cook to release into the open field, where Cook can most easily make defenders miss.

Alexander Mattison also deserves significant credit for the Vikings’ explosive rush attack, as Mattison himself ranks first in the NFL in explosive rush rate among backs with at least 20 carries.  His ten-yard touchdown last week is a nice showcase for how the scheme, second-level blocking and RB talent have reinvigorated the Vikings’ rushing attack:

This is essentially a basic outside zone run (though the wide alignment of #97 (Josh Mauro) forces it into more of a mid-zone run).  Elflein gets a great reach block to seal the nose tackle and Bradbury is quick to take out the linebacker, and the Raiders abandon that backside B-gap to blitz, leaving an ocean of space for Mattison to run through.  From there, Mattison just has the deep safety to beat, which he does in spectacular fashion with a goal-line leap for the score.

That’s how the Vikings turned their rushing attack around.  The focus on outside zone has given the team an identity, something they practiced all offseason to near-perfection.  That new identity capitalizes on the offensive line’s athleticism and dovetails with how explosive Dalvin Cook (and Alexander Mattison) can be once they get in the open field.

The Threat of Dalvin Cook Is Opening Up the Passing Game

Right now Dalvin Cook is getting all the attention — both from fans and analysts and from opposing defenses.  And that’s exactly what Kevin Stefanski wants, as the focus on Dalvin Cook sets up the Vikings’ explosive passing attack.

Just take a look at the Vikings’ first touchdown from last Sunday:

The Vikings come out with two tight ends on the field, and that heavier personnel plus the threat of Dalvin Cook baits the Raiders into a single-high safety look.  You can see just how worried the Raiders were about Cook from how hard the linebackers bite on the play action (so much so that one linebacker falls over).

But the Vikings aren’t handing the ball off; instead, they run a “Yankee” concept, with Thielen running the post route and Diggs running the deep dig route.  Because the Raiders were baited into a single-high safety look, the deep safety is in a bind: he’s just one guy, but has two deep routes to cover.  Once he comes across to cover Diggs, Cousins has an easy read, and he throws a dime to Thielen in stride for the score.

That touchdown is made possible by the threat of Dalvin Cook — by how hard the underneath defenders bite on the play action, and by how the deep safety gets left without help up top because the defense was keying in on Cook.

And that play is a microcosm of how Dalvin Cook sets up the Vikings’ passing attack.  In fact, per Sports Info Solutions, the Vikings’ offense has faced single-high coverage on 75% of plays, ranking second-most in the league.

Part of that stems from Stefanski’s frequent usage of heavier personnel — the Vikings have brought an extra tight end or fullback onto the field on 77% of plays, most in the league by far (for comparison, the 49ers are in a distant second at 61%, and the NFL average is 34%).  That heavier personnel gets teams to expect runs and bring extra defenders into the box, freeing up space for routes downfield.

But part of that is also defenses committing extra resources to stop Dalvin Cook.  Per Next Gen Stats, Dalvin Cook has faced eight or more defenders in the box the ninth-most of any back with at least ten rush attempts, well above league average.

Here the Vikings flood the right side of the field, so that once the single-high safety and deep-third cornerback carry Thielen deep, Diggs is left open in the zone underneath.

But notice how, prior to the snap, Irv Smith Jr. motions from out wide into the box.  Not only does that confirm the cover-3 pre-snap read, it also brings another linebacker into the box and out of the play, and furthermore helps sell the play action.  That, plus the run-action threat from Cook, gets Diggs open deep, and Kirk places a perfect throw that Diggs reels in for 31 yards (plus another 15 on penalty).

Speaking of Irv Smith Jr., last week he recorded three receptions of 20 or more yards.  Each of those receptions was set up by the threat of Dalvin Cook forcing a loaded box and single-high coverage, which Smith Jr. exploited in the seams and to the sidelines.  This next play builds off a normal split-zone run, but rather than cutting across the formation to block the defensive end, Smith Jr. instead releases full-speed into the flat.  And due to Stefanski’s condensed formation and the outside zone action going the other way, he’s left absolutely wide open:

Smith Jr. showcases his speed and vision here to pick up over 25 yards after the catch and five yards after contact (brought back partially by Chad Beebe’s illegal downfield block), and the play is all set up by the threat of Dalvin Cook’s outside zone sucking every defender the wrong way on the play action.

It’s no secret that the foundation of the Vikings’ explosive run success is Dalvin Cook rushing like a future Offensive Player of the Year award-winner in the new outside zone scheme (which I wrote about earlier this season).