‘Dejo’s Return To Minnesota May Be A Big Hit 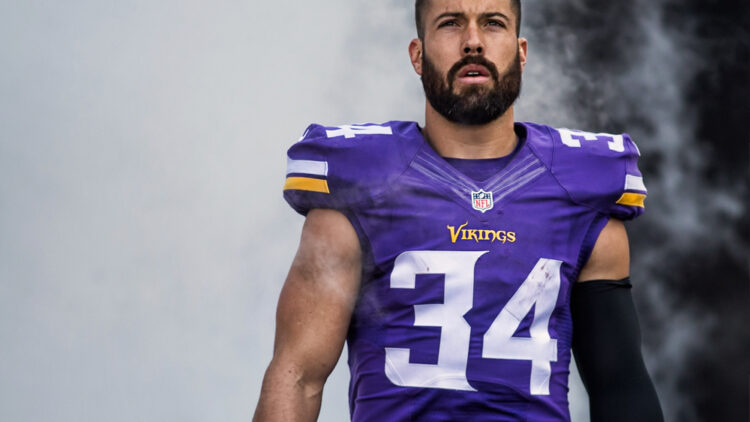 Maybe safety Andrew Sendejo was outplayed by safety Anthony Harris, or maybe he just was one of the scapegoats of a 13-3 season turning into a 8-7-1 one. Either way, his return may bring some big hits and some big things to the Minnesota Vikings defense.

Some Vikings fans really liked Andrew Sendejo, others thought he was a little small, a little slow, and not much of a playmaker at the safety position.

The one thing they could agree on was that “Dejo” was a hitter.

*Editor’s Note: This article comes from ‘The V61’ (vikings61.com) a new website devoted to news, analysis, and history of the Minnesota Vikings! Bookmark The V61 (friend and partner of Vikings Territory and Purple PTSD) and follow them on Twitter and Facebook here!

Sendejo was replaced by Anthony Harris, as well as safety backup and special teams star Jayron Kearse. Also in the mix was newly acquired George Iloka from Cinncinati.

Where the Vikings a better team with him or without him? Well, the numbers testify clearly to the latter. Though their pass numbers stayed almost the same, their run allowances did not. Minnesota ranked 15th in rushing defense and ninth overall.

And–there were clearly less hard hits out there on the football field.

Too Expensive To Keep

While both Vikings head coach Mike Zimmer and fellow safety Harry Smith wanted Sendejo to return in 2019, his $5.5M cap hit wasn’t going to convince Minneota’s front office to retain a safety at that price when Anthony Harris was filling his spot so nicely.

Sendejo then traveled to Philadelphia, where the 31-year old safety was signed at a basement-price and started one game out of the nine he played. Sendejo recorded 36 tackles, one sack, and one interception in 241 snaps for Philadelphia. The one interception came against Minnesota in week six.

Unfortunately for Sendjo, cornerback Avonte Maddox’s return meant his departure for Philly as the Eagles executive office waived him, considering their team replete in the defensive secondary.

Here’s the truth: In a week 6 game at Lambeau Field, Sendejo caused the neck injury that put Avonte Maddox out, a solid safety hit that caught the cornerback collaterally.

It was easy enough to call it an accident on hard safety play, but of course, Philadelphia fans had to find fault and cry some kind of foul, and Sendejo, a part-time player, took the Philly fall.

For the record, the 1-2 Eagles won that game in Green Bay to go to .500, but have gone 3-3 since. They’re an average team that Sendejo was trying to help, and for one play he got a rail out of town.

Sendejo has brought his experience of 104 career games and special teams expertise back to the Vikings with him. His time in the Minnesota defense led by Mike Zimmer will make him invaluable in a variety of packages it would take a new player months to learn.

He’s also bringing back what Zimmer likes to call “some thump” to the Vikings’ secondary. Considering the big plays they’ve been giving up this year, they could use it–in spades.

The league has modified its rules of late and ‘Dejo was the player most identified with the NFL defenses’ reluctance to accept the new focus on helmet-to-helmet contact and “unsportsmanlike” hits.

But what does that matter?

To a guy like ‘Dejo the hits are part of the game, and he likes to keep the framework loose when he’s looking to make them. Maybe he’s an old soldier in a new war, but he’ll have to learn the rules of engagement if he wants to stay on the front line. He’s past his prime at 32 years old and this is most likely his last go-around when it comes to big contracts and winning things.

Of course, there’s always a chance that he brings back something besides his ten seasons of experience to this Vikings’ defense and finds some success all his own. Something that’s been lacking against explosive offenses in 2019 and might very well prove vital in beating this Minnesota defense in the coming playoff tournament.

That ‘something’ could be any given offense’s fear of going across the middle, lest some old safety be waiting there hoping to ring somebody’s bell.