Breaking Down the Offensive Roster 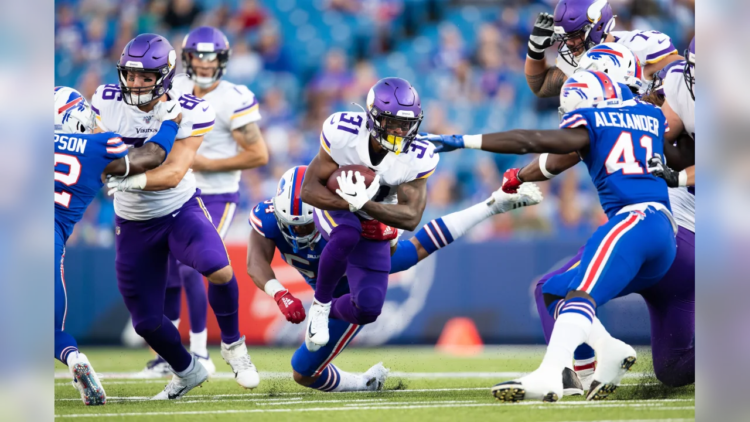 The Vikings’ roster has been trimmed down to the final 53.  With the regular season opener just one week away, let’s break down the final cuts on offense:

Kyle Sloter has the second-best adjusted net yards per attempt of any quarterback in preseason history, behind only Patrick Mahomes and just ahead of Aaron Rodgers, Drew Brees and Tom Brady.

Yet the writing was all over the wall that Sloter’s time in Minnesota was drawing to a close — as gaudy as his preseason production is, the processes that led to that production was more worrisome.  Multiple reports noted that Sloter failed to get the right players on the line, call the right plays, get the snap cadence right and overall struggled with the finer details of NFL quarterbacking.  Those details might not bite you against third-string vanilla preseason defenses when you’re under pressure on just 21% of dropbacks and running play action on 42% of dropbacks (as Sloter was and did this preseason), but in the regular season, those details matter a heck of a lot.

Still, at a certain point, results are results, and Sloter’s arm talent is NFL-caliber.  Sloter’s upside and the QB’s positional importance are enough to justify a 53-man roster spot in my opinion, but given that Sloter has yet to show much progress on those finer details after two years, the cut is not surprising.  With Sloter being signed to the Cardinals’ practice squad, Jake Browning (who did not show nearly as much in camp or the preseason) will apparently be taking his place on the practice squad.

In contrast to Kyle Sloter, Sean Mannion by all reports excels on the whiteboard and nails the pre-snap details that Sloter reportedly struggles with.  He has an NFL-caliber arm and decent accuracy, though this preseason he was perhaps a bit uncharacteristically conservative, and his passes, while catchable, weren’t always pinpoint.  He’s not an above-average backup quarterback, but he checks all the boxes.

As for Cousins, despite all the criticism, he is far and away the best quarterback on the roster: strongest arm, by far the most accurate, by far the best pre-snap, mechanically the most sound in his footwork and delivery, and offers some decent athleticism and pocket awareness.

If John DeFilippo kept five backs in last year’s passing heavy offense, then it comes as no surprise that Stefanski would also keep five given his affinity for the run game and heavy usage of 21 personnel this preseason.

Dalvin Cook had just two carries this preseason for 88 yards and a touchdown.  If he stays healthy, he has a chance to prove himself as one of the league’s very best backs in the team’s new outside zone scheme.

If Dalvin Cook is the outside zone bellcow, Mattison is the inside zone/duo change-of-pace back.  And with his low pads and leg churn, he should also improve the Vikings’ success rates in short yardage situations.  He may not have any flashy highlights this preseason, but his vision, patience and power were on display and should translate into regular season success.

Ameer Abdullah and Mike Boone profile similarly as off-the-charts athletes with good receiving talent and plenty to offer on special teams.  Abdullah has always struggled with fumbles, and he did in camp and in the preseason, but he proved too electric to cut.  He will likely be the team’s kick returner and offer value as a scat back.  Boone could be great change-of-pace on outside zone given how well he stresses defenses horizontally and should be core special teamer.

The reliable C.J. Ham makes the cut over preseason standout Khari Blasingame.  Ham lacks Blasingame’s athleticism and receiving ability, but has always drawn rave reviews for his attention to detail and work ethic.  Ham also profiles as a much better short yardage back.  Blasingame is set to incubate on the team’s practice squad — his future potential as a receiving weapon on 21 personnel play action passes is exciting.

I thought De’Angelo Henderson played surprisingly well this preseason as a runner.  He forced eight missed tackles on just 33 carries (which led the team), but in such a crowded backfield he was always a longshot for the final roster.

I have written before on what makes Diggs and Thielen the NFL’s best receiving duo — elite routes, elite catching, great after the catch.

Chad Beebe emerged early on in camp as the favorite for WR3.  He struggles with concentration drops (as we saw in the preseason) and is not a great athlete, but like Stefon Diggs he separates so cleanly in the breaks of his routes, which makes him a great weapon out of the slot.

With the reports that Bisi Johnson has secured his spot on the #Vikings' 53-man roster, here is every target from his first three preseason games:

Johnson does struggle to separate due to mediocre on-field athleticism and doesn’t have any standout elite traits, but his routes, catch radius and versatility will earn him plenty of snaps this season.

Brandon Zylstra was a surprise cut but his lack of athleticism and route running resulted in him failing to stand out.  Jeff Badet has elite straight-line speed and can get open deep and track the ball well, but just cannot stay healthy.  For all of Laquon Treadwell’s talent and effort, he needs a change of scenery after heavily struggling to produce in his time in Minnesota.  Jordan Taylor is great at the catch point but just couldn’t generate any separation.  The other receivers failed to stand out.

The Vikings’ starting five offensive linemen were never in doubt (despite a few shaky reps from Pat Elflein), but the backup situation was far less clear until now.

Riley Reiff, while no pro bowler, is the Vikings’ best offensive lineman, with good athleticism and good technique.  Pat Elflein flashed highlight-reel blocks both as a pass blocker and in the run game this preseason, but bad habits like lunging and poor balance were also on display as well.  Garrett Bradbury’s off-the-charts athleticism showed in his reach blocks and in space, and he did a solid job in pass protection, but he still sometimes lost his block in the run game.  Josh Kline has so far exceeded expectations, particularly as a pass protector, but like Bradbury sometimes he failed to do his job in the outside zone run game.  Brian O’Neill missed the preseason with an elbow injury but has reportedly looked improved in camp after an impressive rookie year.

Brett Jones finished the preseason as the second-highest-graded offensive lineman in the league, and while that slightly overstates his performance, he looks like a starting-caliber center, and could probably fill in adequately at guard in a pinch as well.  He lacks the movement skills to excel in the Vikings’ outside zone running scheme, and particularly struggles to climb to the second level, but he is a technically-sound player with good play strength for his size.

Dru Samia showcased his trademark nastiness and had a couple fantastic blocks, including on this touchdown run:

Great blocks by Samia and Blasingame on the goal line touchdown run: pic.twitter.com/sbm5qsGTuo

He is still very much developing his technique, however, and likely will not play much this season, but his upside is high.

Speaking of high upside, Oli Udoh has really impressed in both camp and the preseason.  Like Brian O’Neill, Udoh was drafted as a long-term project but has progressed so rapidly that the sixth-rounder earned a spot on the Vikings’ 53-man roster.  His overwhelming size and strength has led to multiple pancake run blocks, and his athletic upside flashes on outside zone runs and in his vertical pass sets.  His footwork still needs a lot of work, and he has gotten away with some poor technique against third-stringers in the preseason, but he has a decent shot at eventually developing into a starting right tackle.

Dakota Dozier makes the roster over the oft-injured Aviante Collins and offers versatility (can play both tackle and guard, though neither very well) and scheme familiarity (worked with offensive line coach Rick Dennison with the Jets last year).  Collins offers great depth on the practice squad.

Danny Isidora was traded to the Dolphins for a 7th-round pick, which was a surprise as Isidora has struggled with a host of technical deficiencies, but good on the Vikings to get a return for someone unlikely to make the final roster.  Storm Norton once had an outside shot to develop into a starting tackle but he’s been unable to overcome his lack of natural leverage and technical deficiencies.

Kevin Stefanski and Gary Kubiak love their tight ends and plan on using plenty of 12 personnel this season, so it’s no surprise that the team will be keeping four tight ends.  Kyle Rudolph had a good preseason, making plays as a receiver and doing a decent job blocking on the outside of plays (though struggling as an in-line blocker both on runs and particularly on passes).  Irv Smith has flashed athleticism and playmaking ability but still seems to be putting it all together, sometimes lining up in the wrong spots or failing to reel in catch-able passes.

David Morgan has been injured all camp and preseason and will miss at least the first six games of the season on the PUP list.  His blocking and underrated receiving talent will be missed.

The Vikings focused all offseason on getting their offense to the same high level as their defense — by promoting Kevin Stefanski, bringing in Gary Kubiak and Rick Dennison, drafting four offensive players with their first four draft picks, and in all adding seven new rookies to the offense.  Now that the roster is largely set, we will see if Stefanski can make the most of the talent.