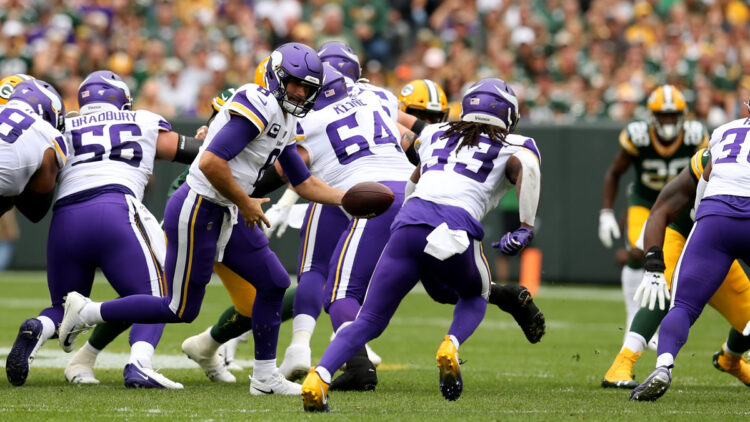 With a stalwart running game featuring a young and elusive back, stout defense and a tough veteran coach, the Vikings of today remind some of the Vikings of yesteryear.

In 1973, a rookie running back named Chuck Foreman came to Minnesota.

Drafted out of Miami, Foreman took the Vikings offense in a different direction under 33 year old quarterback Fran Tarkenton, adding a stunning balance of speed and agility to the Vikings’ backfield.

Foreman’s explosive style and effectiveness as runner and pass-catcher supercharged the Vikings’ offensive attack and took them from a 7-7 season to Super Bowl VIII the very next year. In fact, the Vikings went to three Super Bowls in four years with Foreman leading the way, a five-time Pro Bowler and first-team All-Pro 1975.

When Dalvin Cook arrived in Minnesota in 2017, it took him only four games to make Viking fans begin to forget about Hall of Fame running back Adrian Peterson. Every time Cook touched the ball, fans anticipated a very real possibility he would break a game open. Unfortunately, a torn ACL sidelined Cook for the remainder of his rookie season. It even hindered his play in 2018.

But today, the back from Florida State, no doubt fully healed, looks even more electrifying then he did in 2017. After tearing through the Oakland Raiders defense on Sunday to the tune of a 6.9 average yards per carry, Cook easily leads the NFL in rushing after three weeks.

The running styles of Foreman and Cook are quite dissimilar. Foreman, a darting showman with the ball, replete 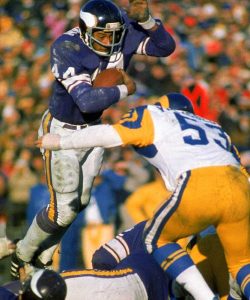 with wide-legged spin moves, deft and powerful stiff arms, and excellent acceleration, Cook with a subtle brilliance to his feet, body control, and power at impact.

Foreman beat a thousand tackles by expanding his body on a cut, giving you only a piece to grab, while Cook sets up and slices into and often past his opponent, pressing him to take an angle that misses the clean tackle.

Foreman, the better pass-catcher, Cook better between the tackles, they both have now changed the Vikings into a run-first offense. An effective running attack is the font of success that both the offense and defense share–ball control and game control.

For Fran Tarkenton, the Vikings’ legendary quarterback, the years between 1973 and ‘78 were the last of his career. And though he still moved around and about the passer’s pocket, his game was centered around high percentage passing to compliment the Viking run game.

Kirk Cousins, now 31, doesn’t have the league’s best line, and he certainly isn’t a scrambler like old Fran, but like Tarkenton, he at his best when he plays with a plan.

These are different Eras, of course. Everything is geared to the NFL passing game these days. Considering Tarkenton’s average completion was 7.3 yards while Cousins is 7.6, there’s an argument that the two weren’t looking to do much more than play the position practically.

Or as Mike Zimmer likes to say: “Within yourself”.

The Vikings’ early 70’s wide receiver corps of John Gilliam and Jim Lash were close counterparts to Adam Thielen and Stefon Diggs. Both were possession receivers around six feet tall that had occasion to beat you deep.  The two are are also at their best when not pressed into crucial situations, but augmenting the threat of an effective ground game.

Defensively, the Purple People Eaters are hard to match up with. In the 1970’s there were Viking helmets throughout NFC defenses in the Pro Bowl.

But with such fine players from defensive tackle all the way back to free safety, doesn’t this 2019 squad look pretty good alongside? Linval Joseph isn’t Alan Page in the trenches, but we’ll all take Harry the Hitman over Paul Krause in center field.

In a time where defensive coordinators were not titled, the Vikings were a top-three defense through half the decade of the 1970’s, just as Mike Zimmer has established the most consistent elite defense in the NFL’s last 5 years.

Run the ball even when the opponent knows you’re going to run. Take a lead, play a smart and aggressive defense, and control the clock.

A grand group of old Viking players congregated on Sunday at US Bank Stadium and watched a team wearing their old colors whip the last team that beat them all in a Super Bowl.

It must have felt good to see that kind of football do so well in this modern day. It also had to feel good to remember a time when they were winning the same way.