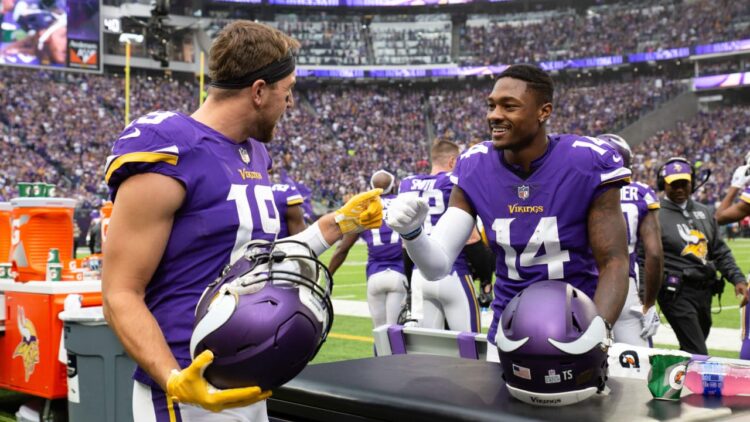 There are a lot of ways to analyze wide receivers, such as their catch rate, yards/reception, number of touchdowns, etc. All of these are great for comparing players to one another, but if you want to look at the best of the best route runners and hands in the game, there’s a simple set of metrics that only an elite few have ever accomplished in Vikings franchise history: The 10/100/1000 slash line.

10 receiving touchdowns, 100 receptions, 1000 receiving yards. While this may seem relatively easy to accomplish, in the history of the NFL only 29 players have done it on 44 occasions. Names on this list include Hall of Famers like Jerry Rice and Terrell Owens, as well as active players like Antonio Brown, Odell Beckham, Jr, and Demaryius Thomas. The list also features two Vikings Hall of Famers: Cris Carter and Randy Moss.

In 1995, Carter had 17 touchdowns, 122 receptions, and 1371 receiving yards. With HoF quarterback Warren Moon slinging the ball to him, Carter led the league in receiving touchdowns. 1995 would be the best season of number 80’s career, setting personal records in all three statistics as well as receiving yards/game. Despite the Vikings only going 8-8 that season, both Carter and Moon would be elected to the Pro Bowl.

Fast-forward eight years, and a 26-year-old Moss is tearing through defenses across the league. Back in 2001, the Vikings went 4-1 in games where Moss accounted for 40% of targets. In 2002, head coach Mike Tice decided to take advantage of this by implementing the “Randy Ratio,” which would, in theory, produce more wins. It didn’t work, as Minnesota finished 6-10 that season. But, what it did do was force Moss to add more routes to his repertoire, making him even more lethal.

Now it’s 2003 and catching passes from quarterback Daunte Culpepper, Moss posted a line of 17 touchdowns (first in the league), 111 receptions (second), and 1632 receiving yards (second). Moss would set personal records that season for receptions, receiving yards, and receiving yards/game. Minnesota had a slightly better record this time around at 9-7, and Moss and Culpepper would also both go to the Pro Bowl, with Moss also being named AP First-Team All Pro.

It’s no shocker that two of the best wideouts in the purple and gold’s history have accomplished this amazing feat; they were some of the best receivers of their times. But those seasons happened a long time ago. What about now? Well, as luck would have it, Minnesota currently has a pair of receivers that are also some of the best in the game: Adam Thielen and Stefon Diggs.

A glaring issue for the Vikings last season was the offensive line, and quarterback Kirk Cousins having to throw a significant amount of passes under pressure. With some offseason O-line improvements to give Cousins more time to create quality passes, I have no doubt that Thielen or Diggs (or both) will have 10/100/1000 seasons next year.