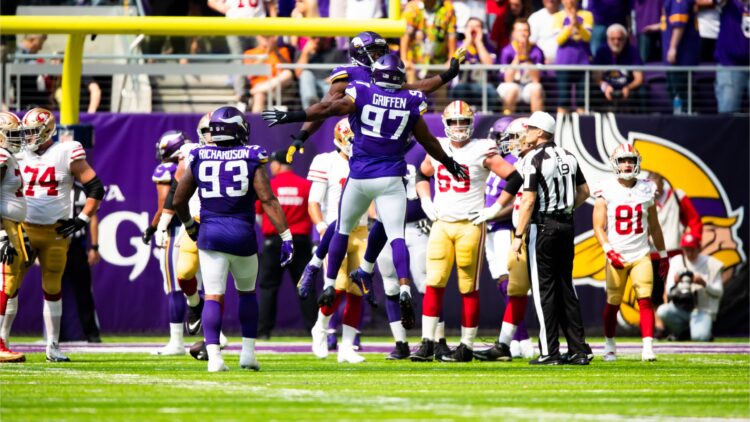 In fact, he probably welcomes it because it means his defense probably played well.

Zimmer orchestrated an ugly 24-16 win against the San Francisco 49ers to open the 2018 season on Sunday. The Vikings are 1-0.

The Vikings got used to winning ugly in 2017 — it happens by default often when the defense is as dominant as Minnesota’s. And winning ugly isn’t necessarily a bad thing. It just means that it didn’t take a 300-yard passing performance from the starting quarterback and likely doesn’t require a lot of offensive production at all.

Winning ugly means your team is so talented that there’s a wider room for error. The Vikings made a few mistakes during Sunday’s win over the 49ers that would cost most teams the game. 49ers tight end George Kittle got open on blown coverages multiple times. Minnesota’s offense mismanaged the clock in the final possession of the first half, which likely cost the team three points and potentially seven points. Additionally, Dalvin Cook managed only 40 rushing yards on 16 carries — and 45 of those yards were after contact.

The Vikings clearly have some areas that need to be cleaned up. However, they still won rather comfortably over an opponent that many predict to battle for a playoff spot this season.

You see, this team is just so freaking talented that it can afford to make a few key mistakes or have a few lackluster performances here and there and it won’t result in a loss. In particular, Zimmer’s defense made play after play to ensure that San Francisco wouldn’t get back in the game. The 49ers reached deep in Vikings territory thanks to a coverage breakdown? No problem, let’s just stuff them a couple of times and then force and recover a fumble.

But wait, the offense is struggling to sustain drives put the game away in the second half? No problem, Xavier Rhodes and Harrison Smith will just pick off a pair of passes to seal the win.

The Vikings flashed some moments of brilliance on Sunday, there’s no doubt about it. Both of Cousins’s touchdown passes were totally unfair. Sheldon Richardson played out of his mind, and that only paved the way for the pressure generated by Everson Griffen and Danielle Hunter that resulted in three combined sacks (by the way, the foursome of Griffen, Richardson, Hunter and Linval Joseph is absolutely ludicrous and it showed against San Fran). First-round rookie Mike Hughes tallied a pick-six in his professional debut.

But they also made several key mistakes that would result in a loss for many other NFL teams. That’s the thing about really, really good football teams — they don’t need their ‘A’ game to win each week. And I think that’s true about these Vikings.

Moving forward, it should be expected that the offense begins to find a better rhythm as the season continues. DeFilippo and Cousins are still working on getting in sync with not only each other but also all of the playmakers at their disposal.

Straight up, Minnesota’s offense will have to execute better against the Packers than it did against the 49ers. Aaron Rodgers can be counted on to put up more than 16 points, whether he has one or two healthy legs. Meanwhile, the Packers defense, especially up front, has enough talent to give the Vikings offensive line fits both in the running game and in pass protection.

Let’s hope the offense can find a little bit more success sustaining drives for 60 minutes, because that will be required for a win this Sunday.

I give the #Vikings a #SkolScale 8. Our D is great. We just need to get the o-line better for our running backs. But I bet we’ll beat the #Packers this week, even if Rodgers plays. Our D-line will make it hard for his lack of mobility. #Skol

I'M AT A 20.17 AND LET ME TELL YOU WHY. VIKINGS WON 24-16 IN WEEK 1 AND BEAT THE WONDERKID INTO OBLIVION. THE VIKINGS WILL BE TRAILING IN THIS GAME LATE 17-13 BUT THEN COUSINS WILL LEAD A GAME WINNING DRIVE AND EARN THE "KOMEBACK KIRK" MONIKER. CAN I GET A HELL YEAH? pic.twitter.com/685dPf4dHC