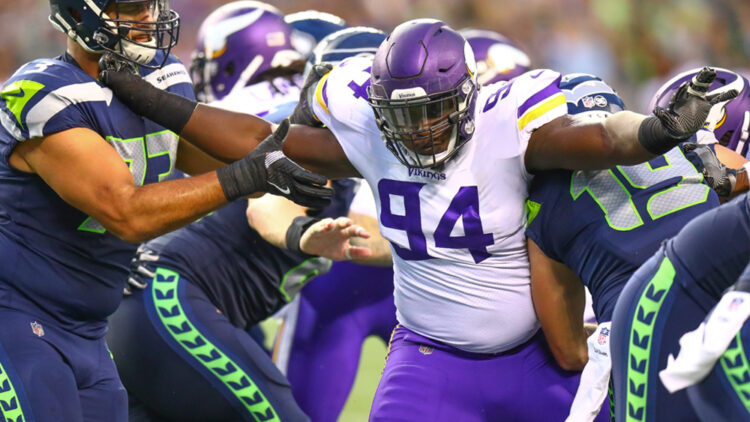 Earlier in the week, we took a glance at one Vikings position of need — offensive guard. Now, let’s jump to the other side of the ball and focus on defensive tackle.

The Vikings have two in-house free agents that, ideally, could return in 2018. One is a starter, Tom Johnson. The other is a backup, nose tackle Shamar Stephen. Each of them are familiar with Mike Zimmer’s defensive scheme and have been part of a productive rotation since 2014. However, they’re both unrestricted free agents and may be too expensive for the team to afford.

Sharrif Floyd (Age 26, 6-3, 297 lbs.) will likely never play in the NFL again. It’s a terrible story. A young player goes in for routine procedure on his knee and a nerve is accidentally severed. Floyd has had issues with the leg ever since. He recently filed a grievance with the league because, according to Ben Goessling of the Star Tribune, the team only paid out a portion of his $6.75 million scheduled salary.

Both parties are awaiting the ruling of the dispute before any final roster move is made. The expectation is that Floyd will ultimately reach a settlement with the team and then be released, creating millions in cap space for the Vikings.

Linval Joseph (Age 29, 6-4, 328 lbs.) is the lone starter under contract. Joseph continued his run-stuffing dominance last season and also added 3.5 sacks. The nose tackle earned an 88.1 Pro Football Focus grade in the regular season as he continued to fly under the radar as one of the more underrated players in the NFL.

Tom Johnson (Age 33, 6-3, 288 lbs.) had a pretty good season as the Vikings’ 3-technique in 2017. He only registered two sacks, but was among the lead leaders in run stop percentage and pressured the QB consistently. His PFF grade was a solid 78.9 in the regular season. Andrew Krammer of the Star Tribune reported the Vikings would like to bring back Johnson, but at a reduced role in 2018.

Naturally, that means the team wants to pay him less. He made $2.35 million last season. Chris Tomasson of the Saint Paul Pioneer Press reported Johnson’s salary demands may be too high for the team to bring him back. He sought a $4 million extension before the 2017 season. There’s reportedly mutual interest in a reunion, but Johnson will test the open market to see what kind of offers he receives.

Shamar Stephen (Age 27, 6-5, 309 lbs.) finally recorded his first career sack in 2017. That being said, rushing the quarterback is not his job. As the primary backup to Joseph, and as a run-stuffing member of the rotation, Stephen had a good year, earning a 73.1 PFF grade in 2017. Considering his age, size, and experience under Zimmer, Stephen may get offered starter money by a team looking to give him an opportunity to do just that next season.

Jaleel Johnson (Age 23, 6-3, 316 lbs.) was moved around by coaches in last year’s training camp until he found his niche at 3-technique. Johnson looked very good in the Vikings preseason games last year. If Tom Johnson and Stephen each land elsewhere in free agency, the second-year man out of Iowa could be in line for a huge workload increase in 2018.

As the Vikings seek to replace up to two interior defensive linemen, here are some of the top options that will be available this offseason.

Vikings Territory will take an in-depth look at these prospects in the days leading up to the 2018 NFL Draft.

The legal tampering period begins today at 11am (CST). Stay tuned to VT for updates.