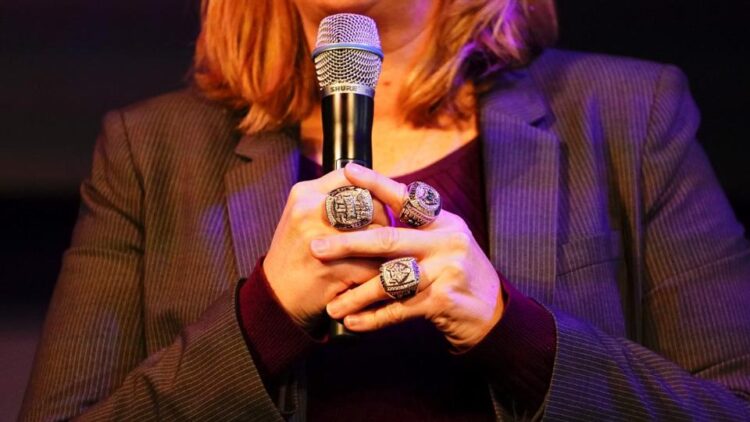 There has never been a female general manager in the NFL. Chances are, when that day finally arrives, the Minnesota Vikings will have a number of qualified candidates on their payroll.

The organization has led the way in providing opportunities to women in a traditionally male-dominated industry. But perhaps more importantly, the Vikings have succeeded in creating a workplace environment that treats all of its employees with respect.

Don’t just take my word for it.

A number of the team’s employees took the time to speak with me about their career journeys and what it’s like working for the Vikings today. The first was Lindsey Young, staff writer/assistant editor (and former Vikings Territory contributor). Here is her story: 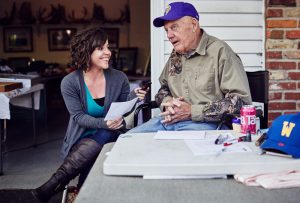 Lindsey Young, an Andover, Minnesota native, is the first female writer in Vikings history. She was hired in December of 2015. Before working for the team, Young was a web reporter intern for the Minnesota Timberwolves and venerated contributor for Vikings Territory.

VT: What motivated you to become a writer?

YOUNG: I’m a huge family person. I’m really close to my family, and so it’s easy for me to say I don’t know where I would be without them, but there’s also something to be said for somebody on the outside building you up and having confidence in your abilities. ‘Cause they’re not your family so they don’t have to say that.’ I’ve been encouraged by a number of people over the years, dating all the way back to fifth grade when my teacher, Mr. Ken Koch, told me that I was a talented writer in response to my journal assignments. I really think he’s the one — outside of my family — who planted that first seed of becoming a writer.

YOUNG: The thing that I love the most about writing is just telling people’s stories. I love that I get to write for a football team because it combines two of my passions: football and writing. Most of the time, writing is something that excites and energizes me. Game recaps describe things like great plays and player performances, but then there are the other types of stories where it’s more of the human interest side of things, and I really enjoy that part. When I’m writing, it almost doesn’t matter if I’m writing about Stefon Diggs or if I’m writing about the mom of a patient at the children’s hospital that I just met, because I feel like everybody has a story that’s important to share.

I feel like God has given me a gift to be able to share people’s stories in a unique way, or to help them share their stories, and so that’s something that really motivates me and always has about writing. Even when I was in college and didn’t necessarily know what type of writing I was going to do, I really loved that (the storytelling). There’s just something about finding a special way to talk about someone’s life or about an experience that they’ve had.

YOUNG: As far as specifically moving this direction, [it] definitely started with my internship with the Timberwolves as a senior in college. That was absolutely vital to the whole thing, because it confirmed to me what I wanted to do and that I really enjoyed it and that I could do it and be good at it. So that was huge. I met people that I continue to talk with and learn from during my internship with the Wolves.

VT: Who were some of your mentors?

VT: What did you learn from them?

YOUNG: The general concept of networking. Just putting yourself out there; getting your work out there so that it’s noticed. I wrote a lot while not knowing if really anybody would read it, but I wanted to have a consistent profile of work to show somebody if I had the opportunity.

Even if I wasn’t writing for Vikings Territory or something else, if I was watching a Timberwolves game, I would go and write a recap of it and I’d post it on my blog, which was essentially an online portfolio for me at that time. So I just never stopped writing. I never stopped trying to put myself out there and move forward. So I guess those are the biggest things because — that’s simplifying it — but all of that kind of got me to the point where I am now.

I loved it too much to quit it. There was like four years where I was working full-time at the University of Northwestern, working as a server at Ruby Tuesday, and then I was doing writing on the side. I kept juggling those multiple things for a few years until it made sense to not do that anymore.

VT: How happy were you to land a job with the Vikings?

I got a call offering me the position the day before Thanksgiving. I was just absolutely ecstatic. I mean, I held it together on the phone and everything [chuckling]. I was professional in accepting the job but also definitely excited.

When I got off the phone, the first person that I called was my dad, who was at work at the time. I called him and he answered, and as soon as he answered, I started crying because I was so excited and so happy, but my poor dad didn’t really know what was going on at first because he couldn’t really hear me. I was finally able to tell him that I did get the job.

That was a special moment for me to tell him especially, and then after that I told my mom and my sister. So yeah, it was just crazy. It was, really surreal. Every once in a while, it still kinda seems surreal. Like, ‘Wow, I’m actually doing this for my job.’ And I work for an amazing organization, you know, that I can’t say enough good things about. So, it’s just been an awesome experience.

VT: What an unforgettable moment, so cool! Describe current position with the Vikings.

YOUNG: People always ask me to ‘describe a day in the life of,’ and that’s hard because it changes so much, but as far as my duties I guess, there are three of us writers and we all have a hand in any written content that comes out through the Vikings. Most of my work is on Vikings.com, but then we also do the written content for Playbooks at home games, the Playbook for training camp and then the team yearbook, as well.

VT: What’s your favorite part of the job?

YOUNG: My favorite part probably has to be game day. I mean, honestly, you just can’t beat that high-energy atmosphere. It’s — the funnest part of the job would be game day. But really any time that I’m getting to, like I said before, share people’s stories, or even if I’m writing about a play in the game, I like to find a new or creative way to do that.

VT: What would you do if you weren’t in football?

YOUNG: The easy answer is to say I’d be working in basketball. But, I’ll say this — I’m definitely more of an introvert by nature. I like people, and I like connecting with people, but it’s hard for me to go outside of my comfort zone and meet new people or talk to people that I don’t know. And that’s a lot of what journalism is, right? And so in college I did have some of those hesitations, like, ‘Gosh. I don’t know if I’m going to be cut out for this. I don’t know if it will be the right career for me.’

But what I discovered is that I’m passionate enough about the sport itself, and therefore am just kind of energized by being in that atmosphere that sort of… overcomes that introvert or that shyness in me because I’m invested enough to ask this player about his performance in the game, or I care enough to share this person’s story, that I sort of forget about being shy in order to get my job done. But if I wasn’t in sports journalism, I would probably still be doing something creative. I do some photography on the side, and I can see myself maybe doing that if I wasn’t in sports journalism full-time.

VT: I know how it feels to be shy. How did that initially affect your job with the Vikings?

YOUNG: It was tough at certain times. I will definitely say it’s gotten easier. I don’t really think about it as much as I used to.

VT: What are your thoughts on working in a male dominated industry?

YOUNG: I knew going into it that it likely would be predominately male. And that was never really an issue for me at all because at the end of the day, I really want to work with people who care about their job as much as I do… who care about their coworkers and employees, that have integrity, that care about their organization and the brand, and the people that I work with fill all of those things. So to me, that’s most important, because then we’re all on the same page.

I guess when I’m sitting with my team — my team is mostly male — I don’t really sit there and think like, ‘Wow I’m one of the only females,’ because we all have the same goal. We’re all working together, we collaborate together, we all have different skill sets, and so it’s not something that occurs to me very often.

As far as challenges or anything, I really haven’t had any major challenges with being a female in the industry. Everybody has treated me with nothing but respect.