Vikings Salary Cap Update: A Look Ahead to 2019 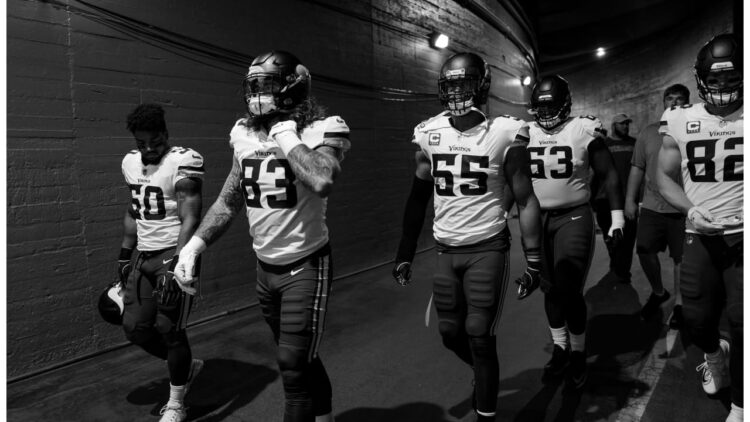 To quickly bring you up to speed, the Vikings have been diligently locking up their core players. Even after the offseason acquisition of quarterback Kirk Cousins to a fully guaranteed, $84 million contract, the team was able to sign defensive tackle Sheldon Richardson and hand out extensions to wide receiver Stefon Diggs, defensive end Danielle Hunter and linebacker Eric Kendricks.

With Cousins, Diggs, Hunter and Kendricks locked up, the majority of the Vikings nucleus is under contract for the foreseeable future. There are, however, a couple key players on the roster that are due substantial money in the next year or two.

Since the team will be pressed for cap space this upcoming offseason, the Vikings may need to do some maneuvering to stay beneath the cap. Here are the main decisions the Vikings will be faced with:

The following players are scheduled to be free agents after the season:

The most notable in-house decisions for the Vikings next offseason will be whether or not to re-sign Anthony Barr and Sheldon Richardson. As of now, it doesn’t appear as if Barr hasn’t done enough on the field to earn an extension. The team could look to franchise the 26 year-old linebacker, but at this point it seems unlikely. Still, the season is young and a lot can change in the next 12 games.

Richardson has looked good in Purple thus far, but he hasn’t been the destructive force the Vikings thought he could be when he was acquired this offseason. The team would like to see more from the 27 year-old. He’ll likely need to produce at a higher level in order to earn the big-money contract he’ll undoubtedly be seeking after the season.

Looking at the remainder of the free agents, it’s likely the team would prefer to bring back all of the RFAs and ERFAs. The Vikings will also try to bring back the veterans who are willing to sign for near the minimum salary. But, that depends on if the players are willing to sign for that amount and if there’s enough cap room to be able to do so. We’ll take a closer look at the in-house free agents after the season.

In order for the Vikings to be able to re-sign their own players and explore the unrestricted free agency market, the team will need to add to its projected $9 million in cap space (per OverTheCap.com). Here are some ways the team can create more cap room this offseason.

The following players are under contract next season. But because of their substantial cap hits, these players may be approached by the team and asked to take a pay cut, or be cut, in order to save the team money. Here’s the amount of cap savings that would be created with each player’s release.

By cutting these four players, the Vikings would create nearly $30 million in cap space and only $3 million in dead money. Dead money is the money owed to a player after they’ve been cut/traded. While it’s too early to project which players will be cut and which ones will be asked to restructure, the Vikings have multiple options that would substantially open up their wallet. For this reason alone, they’re far from being in cap jail.

The Vikings’ first-round pick of the 2016 draft, Laquon Treadwell, looked like a different player this preseason. Unfortunately, that has not translated into the regular season. The 23 year-old finally caught his first career touchdown pass in the Week 2 tie at Green Bay, but multiple drops by Treadwell have plagued the Vikings’ offense.

This upcoming offseason marks the deadline for Treadwell’s 5th-year option. It seems highly unlikely that the Vikings would pick up the option, but stranger things have (probably) happened. It would cost Minnesota roughly $9.5 million to retain Treadwell for the 2020 season.

Speaking of 2020, here are the players scheduled to be free agents after next season.

If Rudolph and Sendejo have their contract situations resolved this offseason (cut/restructure), the Vikings could have some big money to spend during the 2020 offseason with the majority of their nucleus still intact.

Like many large NFL contracts, the recent extensions handed out by the Vikings include a sliding scale of dead money as the contract ages. Most of the deals have zero dead money in the final year of the contract. Structuring the contracts this way will give the Vikings copious financial flexibility in the years ahead, especially as the roster begins to turnover after or around the 2021 season.

Because the NFL salary cap typically increases by $10-12 million annually, the Vikings will have more and more wiggle room under the cap every year starting after next offseason. However, it’s the upcoming offseason that presents the Vikings with most arduous financial challenge.

After looking at the situation in more detail, the Vikings are in better shape than one would think, especially considering the current lack of funds (~$150K in cap space). But by making just a couple of roster moves, the team will free up a considerable amount of cap space. Long story short, the team is in great shape financially for the long haul.

In the last two years, the Vikings have signed Kirk Cousins to a 3yr/$84M contract and long-term extended the following stars: