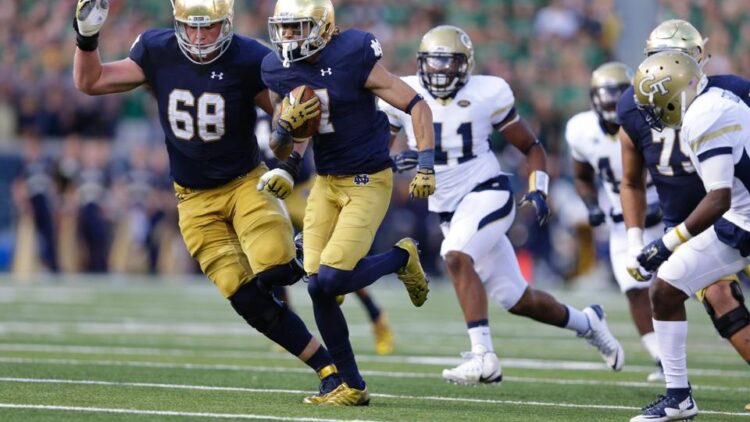 Fluidity: McGlinchey’s initial fluidity immediately stands out when watching film. He moves very well for such a large prospect. On his pass sets, McGlinchey understands how to get depth and set vertically, with very little wasted movement. Prior to the 2016 season, the All-American played primarily right tackle, but due to his experience and a team-need for a premier blindside protector, McGlinchey made the switch to the left side.

As expected, McGlinchey initially struggled with the transition to the other side of the offensive line, as he was learning a completely new position. The example above, however, gives you a clear picture of McGlinchey’s (No. 68) easy pass set and natural fluidity.

The defensive end attempts to bull-rush McGlinchey by placing his hands down the middle of his chest, but McGlinchey does not let the defender fully engage. He extends his arms and disables the defender from ever becoming a factor, showing off the measurables that make him such an enticing prospect. By adjusting his hands and base, McGlinchey beats the edge rusher’s initial punch.

Footwork: McGlinchey isn’t the most impressive athlete, nor does he have the lightest feet. It shows, as his footwork is average, but strong enough for the NFL. In the running game, with his experience and comfort in the Notre Dame system, he displayed a confident understanding of proper techniques and where exactly he needed to ne on certain concepts.

One trait I love about McGlinchey is that he always keeps his feet churning. They rarely stop moving or get stuck in the ground. An offensive lineman should always keep their feet moving, no matter the circumstances. By keeping their feet moving, linemen can maintain proper technique at any point when engaging defenders at the point of attack.

Mean streak: When assessing offensive linemen, evaluators love to see a player on tape with a relentless motor; someone who plays aggressively through the whistle.

McGlinchey fits the mold and has a very impressive mean streak. He and Quenton Nelson, arguably the class’s most impressive lineman, exemplify a dynamic duo. The two fed off one another at Notre Dame, firing off the ball to embarrass every defensive lineman or linebacker in their path.

Technique against speedy edge rushers: The biggest debate with McGlinchey is where he’ll play — left or right tackle — in the NFL. While evaluators can’t decide his fit, If I was the general manager that drafted McGlinchey, I would immediately make him at right tackle.

I know he’s played left tackle for the past two seasons, but his struggles against edge rushers with elite speed is worrisome. The differentiation between a right and a left tackle makes a difference, because one protects the blind side of the quarterback, while the other is always within the signal caller’s line of sight.

Given McGlinchey’s struggles against speedier rushers, it is better that he stays at right tackle and avoids giving up quarterback hits like the example in the above video.

Core Strength: Where McGlinchey needs to make the biggest jump is in his core strength. While he shows tremendous upper-body strength at the point of attack, McGlinchey routinely loses his footing and falls to the ground in the run game. This is due to his lack of core strenght, which is an area that helps offensive lineman explode from the hips and drive defenders.

Balance: Despite being very tall for an offensive tackle, McGlinchey has good ball get-off — meaning that he has solid initial acceleration at the snap of the ball. He possesses extremely long arms, so it is hard for rushers to actually get hands on him. Having an impressive physique sometimes comes with deficiencies, though. McGlinchey is a bit of a lunger and waist-bender. He has some flaws that he needs to clean up, but there are a lot of traits to like about his playing style.

McGlinchey and Falcons Quarterback Matt Ryan are first cousins. Their moms are sisters. Ryan says that the former Notre Dame tackle frequently asks him about NFL life and how to become the best player that he can be from the moment that he’s drafted.

The Vikings’ need at tackle will be predicated on what the team opts to do with Mike Remmers. After playing the majority of the season at right tackle, Mike Zimmer shuffled his offensive line, which resulted in Remmers playing left guard in the season finale and during the playoffs. Nick Easton’s season-ending ankle injury contributed to that, but after having success there, the team may decide to keep 6-year veteran there.

If Minnesota decides to keep Remmers on the interior, then that leaves Riley Reiff and Rashod Hill as the only offensive tackles on the roster. After starting seven games at right tackle, Hill had plenty of success, but as the team went deeper into the playoffs, his limitations and flaws became more evident. Hill is best served as the team’s backup swing tackle.

With that being said, if that is the route that the decide to go with Hill, that leaves the team with a huge hole at right tackle in the starting lineup. There is a slot where McGlinchey could come in and be an immediate contributor. It is widely believed that he is best suited as a right tackle as a rookie and he would have a chance to have immediate success there early on.