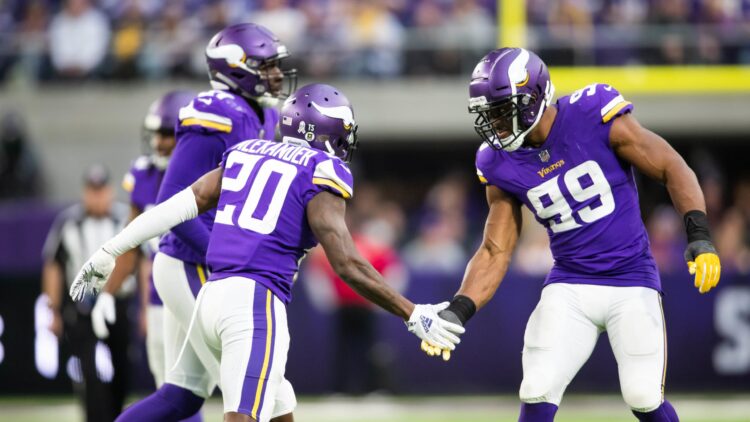 The Minnesota Vikings are slowly returning to 2017 form.

Last season, the Vikings won largely because of Zimmer’s shutdown defense. Minnesota finished No. 1 in the NFL in points allowed, yards allowed and third-down defense. It didn’t matter if it was the high-powered Los Angeles Rams or the Brett Hundley-led Green Bay Packers. The defense made the offense’s job pretty easy.

Minnesota’s 2018 campaign did not begin this way. The Vikings defense struggled out of the gate, specifically in Weeks 2-4 against the Packers, Buffalo Bills and Rams — and it resulted in a 0-2-1 record during that stretch. Most football fans, including myself, had no freaking idea what happened during the Vikings’ 38-31 Week 4 loss to the Rams. Minnesota couldn’t stop anything. It was as if Zimmer called up Leslie Frazier and asked for his notes from the 2013 season.

But something happened during the mini-bye week between Minnesota’s Week 4 embarrassment and its Week 5 win over the defending Super Bowl champion Philadelphia Eagles on the road.

But since Week 4, the Vikings’ defense has been dominant once again. In that span, the Vikings are allowing a 21% third-down conversion rate. Twenty-one percent. That’s best in the NFL by nearly 10%. I don’t think we realize how unfair Zimmer’s complex blitzing schemes are on third down.

The Vikings are also first in sacks (21), third in yards per rush attempt allowed (3.61), and seventh in takeaways (10) since that loss to the Rams. Minnesota’s defense is getting it done against the run, against the pass, and in key situations such as third downs. This is a complete defense that, after falling on its face out of the gate, is now running swiftly and smoothly just as Linval Joseph did for his touchdown against Philly.

This impressive defensive turnaround has resulted in four wins in five games. And the one loss? It was against the 7-1 New Orleans Saints and the Vikings allowed only 120 yards passing and an interception to future Hall-of-Fame pigskin tosser Drew Brees.

Minnesota’s most recent performance against the Motor City Kitties was the grand finale of its “We’re back!” campaign. Danielle Hunter led a ferocious pass rush that sacked Matthew Stafford 10 (ten!!!!) times, setting a new franchise record, and allowed fewer than three yards per rush attempt. Furthermore, the Vikings defense actually scored more touchdowns than the Lions offense did.

Oh, would you look at that — Mitch Trubisky is on deck for the Vikings defense. And Mike Zimmer gets two whole weeks to prepare for him.

Disrespect For Danielle Is Real

(You guys like that rhyme in the subheading? Pretty sweet, right?)

Let me preface this by saying that I’m not a huge fan of ranking players all together like the NFL Top 100 does. Way, way too many variables factor the perceived performance of each player in the NFL. It’s impossible to create a remotely accurate list.

But it’s definitely possible to be more inaccurate than necessary, as Dave Dameshek illustrates with his latest NFL Top 100 rankings.

My #Top100Players list with @NFLFilms heading into @NFL Week Ten.

(As promised, o-line guru @TheNickShook has been brought into the fold to help keep me from issuing pretentious opinions on the big uglies.) pic.twitter.com/qgthzS3oTU

When I first came across this, I didn’t see anything appalling. He’s ranking players based on 2018 performances, so Patrick Mahomes at No. 1 isn’t ridiculous whatsoever. The most common players referred to in the MVP or “best player in the league” discussions are at the top. That’s what we should expect.

But then I realized a name was missing. A very prominent name. A name that should be extremely familiar to those voting for the NFL Defensive Player of the Year award in a couple of months.

And he’s arguably having a better season than the No. 2 guy on the list.

Hunter gets very little recognition when pundits discuss the NFL Defensive Player of the Year award. This isn’t to say that Aaron Donald isn’t a good choice or even the right choice. But to completely ignore Hunter is truly baffling.

Anyway, onto the Skol Scale.

It’s been two weeks since the Skol Scale has produced a rating. Last week, we focused on midterm grades with the season half over. So, both the Saints and Lions games were factored into this week’s figure.

Despite a 1-1 record since the 7.5 Skol Scale number two weeks ago, the Skol Scale jumped by a half-point. Why?

Let’s look at the loss to the Saints. The Vikings outplayed the Saints virtually the entire game. The outcome was decided by two plays — the Adam Thielen fumble late in the first half that produced a 10-point swing and potentially a 14-point swing, and the pick-six that was handed to PJ Williams thanks to a miscommunication between Cousins and Stefon Diggs.

The Saints did not beat the Vikings. The Vikings beat themselves with uncharacteristic mistakes.

The following week, the Vikings dominated the Lions the entire game. Playoff teams win handedly against inferior teams at home, and that’s what the Vikings did. It didn’t require a ton of offensive production, either — just the way Mike Zimmer likes it.

Minnesota has been trending upwards for several weeks now. The bye week allows dinged up starters to get healthy for a pivotal stretch of games that will ultimately determine the fate of the 2018 Minnesota Vikings.

5. The Vikes still have to play the division-leading Bears twice. Most teams’ fan bases would feel confident that their fav team has two weeks to prep for the most important game of the season upcoming. As a Vikes fan, that slight fuzzy feeling isn’t confidence, it’s fear

Drew’s Take: Here’s one reason to have confidence about that Bears matchup: Mitch Trubisky. He’ll beat you with his legs, no doubt, but if the Vikings can keep him in the pocket and force him to make a key throws down the field, Minnesota will win that game.

5……… that saints loss at home hurts, but what's worse is the vikings were completely out playing them and then fell apart after one misstep. With a bad o line, injuries, and the ability to fall apart at the slightest misstep it feels to much like 2016 season.

Drew’s Take: The offensive line isn’t elite by any means and probably regressed from last season. I’ll give you that. But I will say that the depth is much better than in 2016. Remember TJ Clemmings? The Vikings’ replacements are much better than that. Plus, Brian O’Neill has been superb at RT — earning the freaking starting job as a rookie — and Riley Reiff is now healthy after missing a few games. This is definitely better than 2016.

Drew’s Take: Several key starters have missed significant time this season, whether it’s due to injury or off-field circumstances. Yet, the Vikings are in the thick of it. The poor history at Soldier Field will always scare me a little bit. But I’ll say it again — as long as Trubisky is Chicago’s QB, I’ll feel confident.

Remember last season at Soldier Field? Chicago’s touchdowns included a fake punt touchdown pass from the freaking punter and a Trubisky touchdown pass that was floated across his body to the middle of the field and bounced squarely off the hands of Andrew Sendejo and into the waiting arms of Zach Miller. That method of scoring doesn’t seem sustainable to me.

All stats used courtesy of pro-football-reference.com