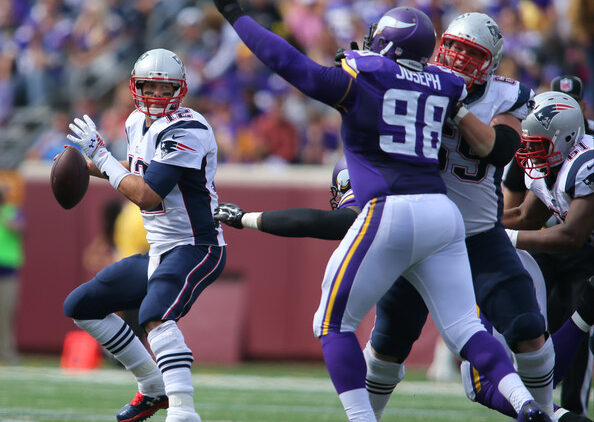 Last week the Vikings played a team that was winless on the road. This week they’ll face a team that’s undefeated at home. That team is the New England Patriots (8-3). For the Minnesota Vikings (6-4-1), it’s a tall task. After all, they haven’t beaten a team with a winning record all season. Now they’ll be tasked with one of the toughest tests in football; winning at Gillette. But lost in all the talk of facing the GOAT and a squad that hasn’t lost a home game in over a year — is the recipe for an upset.

As the Jaguars, Lions and Titans have proven this season, the Patriots are beatable. New England ranks 25th against the pass. The defense has been minced, giving up over 2,700 yards passing and 22 touchdowns to opposing quarterbacks this season. While some of that production has come from garbage time, the unit also ranks 26th on third downs, giving up first downs at a 43% clip.

That’s good news for Vikings quarterback Kirk Cousins, who likes to mix in receivers Adam Thielen and Stefon Diggs. Also, look for tight end Kyle Rudolph to be added to the blend. Rudolph had seven catches for 63 yards in the Vikings win over Green Bay last weekend. And wouldn’t you know it? The Patriots defense has been getting toasted by tight ends. New England has given up over 700 yards and seven touchdowns to opposing tight ends this season.

The Vikings will also look to get the Cook involved. Dalvin Cook, who was making cuts all over the field last week, showed that his hamstring issue is clearly behind him. Look for offensive coordinator John DeFilippo to get the young back involved early with a healthy serving of tosses and touches.

Defensively, the Vikings will face the league’s No. 8 offense. Led by perhaps the best quarterback and coach in football history, it’ll be no picnic. The Patriots unit is as balanced as they come, so relying on the defensive scheme and adjustments may be all that’s sitting between the Vikings and a real whipping.

“It’s probably because of how I am,” said the Vikings head coach. “It’s us against the world all the time.”

In a game where his team is undoubtedly the dark horse, Zimmer’s squad will need to use that long-shot mentality to overcome the odds and deliver a statement win that proves the Vikings are for real. With the world watching Sunday, he’ll have to grind his way to a victory against the purest of opponents.

Tom Brady has shredded Minnesota in his career. The ‘butcher’ is 4-0 lifetime against the Vikings. His kitchen is loaded with top-end talent. From Rob Gronkowski to Julian Edelman to Josh Gordon to Cordarrelle Patterson, New England has a full plate of spicy hors d’oeuvres. Yet on the other side of the ball, the Vikings defense is a piece de resistance. So in Week 13, it could all boil down to whoever has the more tasteful recipe.

Per Ben Goessling of the Star Tribune, the Vikings are 2-8 on the road against playoff teams in the Zimmer era.

Clearly, Minnesota is a substantial underdog in the contest. But, they’re a team that has responded well in said role. They also ‘mash-up’ well against the Patriots. On Sunday afternoon the Vikings have the opportunity to establish themselves as a true threat in the NFC playoff picture. Will they go out and take it?

Let’s take a look at how the teams stack up by the numbers: