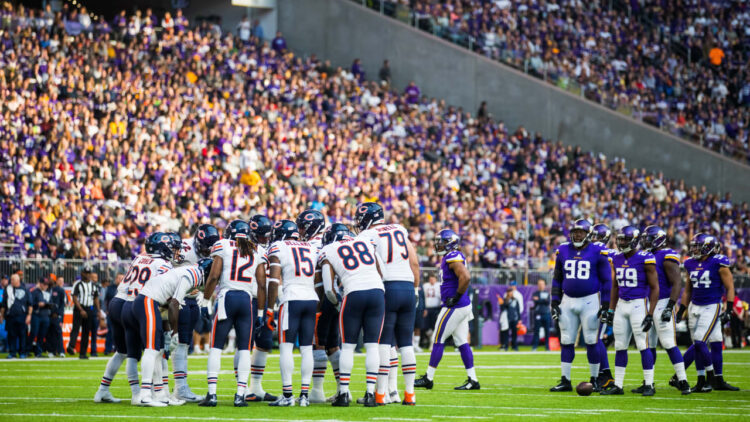 I’ll just come out and say it — there’s a lot to like about the Chicago Bears’ roster. On paper they’re an impressively well-built team, and so far this season their play has reflected that. Offensively they feature an ascending sophomore quarterback, protected by a solid offensive line, surrounded by a plethora of weapons at the skill positions.

Defensively they’ve assembled one of the most talented units in the NFL. By adding Khalil Mack to the mix, the Bears have become a legit threat in the NFC North. There’s a reason Chicago remains atop the division through Week 10.

The Bears defense has not allowed a touchdown on the ground to an opposing running back this season. And while opposing quarterbacks have had slightly more success through the air, Chicago leads the NFL with 16 interceptions — a major reason why the Bears have the league’s best turnover margin. It’s also a big reason why the team has won three straight games.

Matchup preview of #Vikings at #Bears, courtesy of @PFF: pic.twitter.com/uUDaPxa4wL

On the other sideline, the Vikings have won four of the past five games. Also boasting an impressive roster from top-to-bottom, the defending NFC North champions are looking to take back control of the division. The anticipated Sunday night showdown is perhaps the biggest matchup between these two teams in recent memory, and the head coach knows it.

“I think the Bears are a really good football team,” said Vikings head coach Mike Zimmer. “They’re outstanding on defense. Special teams they do a great job, and offensively I think they’ve really improved… This will be a great challenge for us this week.”

After a week of rest, the Vikings will look to keep the momentum rolling following a shaky start to the season. Offensively the team has benefitted from the recent return of running back Dalvin Cook, while the defense just recorded a franchise-record ten sacks on Nov. 4 against the Lions.

Tonight, the Vikings defense will have their hands full trying to stop a red-hot Bears offense that has turned the ball over just once in the last three games.

The offense also faces a tough test against the league’s No. 4 defense. The Vikings will welcome back Stefon Diggs, who missed one game due to a rib injury. He’ll join fellow receiver Adam Thielen – who has caught a touchdown pass in six consecutive games – in providing quarterback Kirk Cousins a dangerous receiving duo that’s capable of giving a stout Bears secondary fits.

Without further adieu, let’s take a look at how the teams stack up by the numbers.