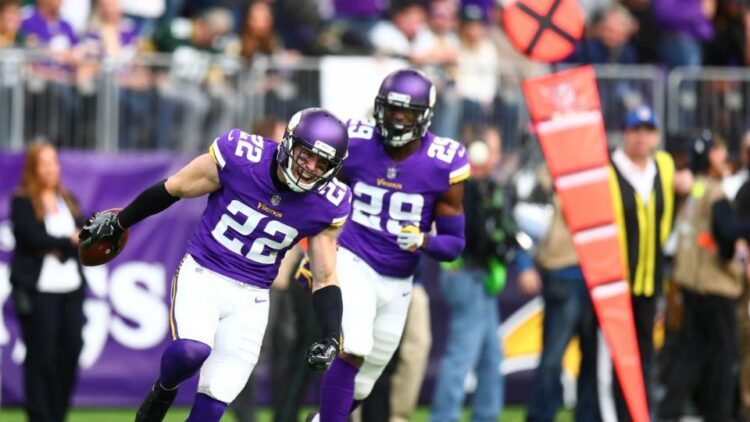 Minnesota Vikings head coach Mike Zimmer has become one of the most successful defensive coaches in the NFL today, particularly when it comes to developing defensive backs.

When Zimmer took over in 2014, Minnesota’s defense was coming off a worst-ranked season in 2013 and the team’s trajectory was not encouraging. Since then, the Vikings have risen to the top of the NFL defensive ranks. Harrison Smith and Xavier Rhodes have developed into superstars while Andrew Sendejo and Trae Waynes were formidable starters in 2017.

The rest of the NFC North is a mix of between extreme inexperience (Green Bay), top-tier talent (Detroit) and a mix of both (Chicago). The Packers, Lions and Bears have all selected multiple defensive backs the past couple of NFL Drafts to keep up with a division suddenly flooded with quarterback talent.

Before diving into the rankings, here’s an update on the points standings thus far. All offensive positional groups and the first two levels of the defense have been ranked.

NOTE: Points for the quarterback position were doubled due to the positions extreme value.

Xavier Rhodes consistently locked down opposing No. 1 wide receivers such as Antonio Brown, Julio Jones, Mike Evans, AJ Green and Michael Thomas, who combined for 13 catches for 146 yards while attempting to play through Closed Rhodes in 2017.

Meanwhile, do-it-all safety Harrison Smith allowed a passer rating of 22.0 into his coverage and was recognized by Pro Football Focus as the NFL Defensive Player of the Year and earned PFF’s highest grade by a safety since 2006 (97.0).

It doesn’t end there. After a rocky start to his third season, Trae Waynes raised his game to another level as the starter opposite Rhodes at cornerback in 2017. According to PFF, Waynes allowed the lowest passer rating in the NFL in 2017 in man coverage (21.8) and led all cornerbacks in run stops (15).

Furthermore, Andrew Sendejo put together his finest season as the Vikings’ starting safety next to Smith. He earned a grade of 86.8 for the season, which was actually the fourth-best grade among all Vikings players.

Terence Newman continues to surpass the limits of the human body by playing one of the most athletically challenging positions in football at age 39 (and soon-to-be 40 on Sept. 4), and still doing it well. Newman allowed a passer rating of 71.4 in his coverage while lined up in the slot, which was No. 5 in the NFL among DBs who played 125 snaps in the slot. Newman was bested by teammate Mackensie Alexander, who finished with the No. 2 passer rating allowed (60.3) out of the slot in 2017.

Oh, right, and the Vikings used their 2018 first-round draft pick on cornerback Mike Hughes, who will challenge both Newman and Alexander for slot duties.

Whew. Okay, I think that’s the gist of it. Let me just wipe off this sweat on my forehead before continuing.

Like the Vikings, Detroit also boasts multiple superstar players in its secondary. Darius Slay has cemented himself as one of the NFL’s top shutdown cornerbacks, allowing a passer rating of 58.1 on 49 targets when shadowing opposing No. 1 receivers in 2017 (No. 3 in the NFL). Teammate Glover Quin has performed like an elite safety for years and earned an 89.0 grade from PFF in 2017, good for fifth in the NFL.

The Lions’ secondary is not void of formidable players outside of Slay and Quin. Quandre Diggs and Nevin Lawson are capable of matching up with No. 2 and No. 3 wideouts. Teez Tabor, Detroit’s 2017 second-round pick, is expected to have a larger role in 2018 after an up-and-down rookie campaign.

Detroit’s secondary is a force to be reckoned with, there’s no doubt about that. But it’s no Minnesota.

However, Chicago does not quite possess the firepower Detroit has in Quin and Slay. Kyle Fuller is a solid No.1 cornerback capable of elite performances such as his Week 16 outing against Cleveland, when he recorded an interception, four passes defensed and allowed zero completions on nine targets while defending Josh Gordon. While Fuller plays mostly off coverage, his counterpart Prince Amukamara is often in press coverage and performed admirably in his first season with Chicago in 2017.

At safety, Adrian Amos and Eddie Jackson are a scary duo Vic Fangio’s defense. Amos is an extremely underrated thumper who thrives in the box and in run support. Jackson’s range and ball skills serve as excellent balance to Amos’s game. Jackson, a fourth-round pick in 2017, recorded two 75-yard defensive touchdowns in one game last season against Carolina — a fumble recovery and an interception return.

Bryce Callahan has showed promise as a slot option for Chicago’s secondary. If the Bears’ depth can show it’s reliable, it can surely move up to No. 2 on this list by the end of this season.

Prior to discussing the current state of the Green Bay secondary, I want to be sure to point out that the Packers front office has done a solid job the past two years adding young players to fix this need. This secondary, with time, will be very good, especially with Mike Pettine now at defensive coordinator.

However, the expectations are low for this unit in 2018. Injuries and inexperience have crushed any chances this group may have had the past two seasons. After lots of moving parts have arrived and left, it appears as if the Packers’ secondary in 2018 will include Tramon Williams and several high draft picks from both 2017 and 2018.

Williams arrives as arguably the top free agent cornerback of the 2018 offseason. However, at age 35, it’s fair to wonder if he can maintain that level of play while becoming acclimated to a new defense.

Kevin King is slated to begin 2018 as the starting cornerback opposite Williams while 2018 first- and second-round picks Jaire Alexander and Josh Jackson, respectively, will battle for snaps in nickel roles.

Ha Ha Clinton-Dix remains Green Bay’s best player in the secondary at safety and it isn’t particularly close. Josh Jones, Green Bay’s 2017 second-round pick, is the other projected starting safety next to Clinton-Dix.

Green Bay spent first- and second-round picks on defensive backs in the last two drafts, so the upside is plentiful for Pettine to turn this unit around. However, to expect that turnaround to happen just one season after finishing bottom five in the NFL in yards per attempt and bottom ten in total passing yards allowed is a lot to ask.

Not that this will shock anyone who is new to reading this series, but Minnesota’s dominance in the defensive rankings sparked a comeback to the No. 1 spot. The Vikings took the No. 1 spot in all three levels of defense and ranked No. 1 in the wide receivers/tight ends ranking on the offensive side.

Also, just for fun, here’s what the rankings would have looked like if I hadn’t adjusted the points for the quarterback position.

Feel free to bash my rankings in the comments!