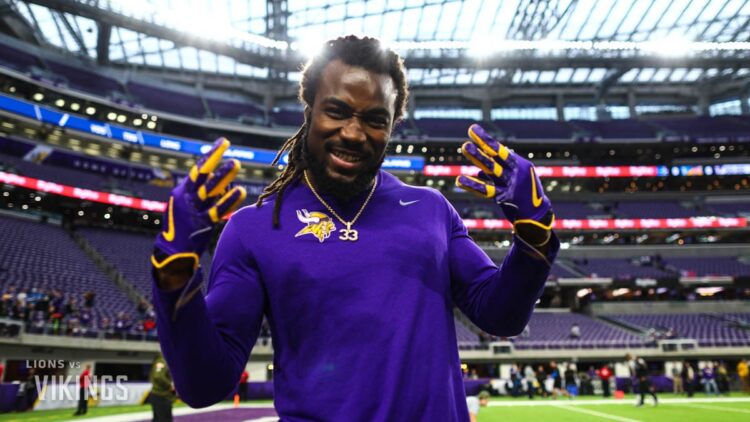 Two teams with playoff hopes still alive met at U.S. Bank Stadium on Sunday, and only the Vikings came out of the game in good shape. The Vikings put it to the Miami Dolphins in epic fashion with a 41-17 and now live to fight another day in the tough NFC Wild Card race.

The Vikings jumped out to a dominating 21-0 first quarter lead and all of Minnesota was speaking the name of new offensive coordinator Kevin Stefanski, who led the offense to their first 40-plus point performance since Game 16 of 2015.

The defense, meanwhile, started strong, suffered a hiccup and then recovered to bury the Fins under nine quarterback sacks and overwhelming team performance that only allowed 193 total yards of offense in the game.

The win, which was the first this season over a team with a winning record, moves the Vikings 7-6-1 and still in second place in the division (The Chicago Bears beat the Green Bay Packers to sew up the NFC North). But the Vikings to maintain their hold on the sixth and final Wild Card spot in the conference, as they head to Detroit to take on the Lions next Sunday.

Today’s game hearkened back to those days of yore in Vikings history when running back Dalvin Cook ran over the opposing defenses—all the way back to the first four games of 2017. Like Joe Johnson said on the Morning Joes podcast, Cook appeared “pent up,” trying to bust out, and on Sunday versus the suspect Miami rushing defense, it happened. The holes in the line were cavernous and Cook raced through, around and over them like we knew he could after watching him his rookie season. On the day, Cook carried the ball 189 times for 136 yards and two touchdowns (he also had one reception for 27 yards). Cook was electrifying, once again demonstrating what he can do when he is healthy and is fed the ball. Expect more of it to come.

Kirk Cousins returned to the Vikings offense on Sunday and looked like a leader and a world-beater . . . in the first quarter. He was 7-of-7 for 101 yards, a touchdown for a 158.3 quarterback rating at the end of the first quarter—spotting the Vikings to a dominating 21-0 lead. He was looking relaxed, confident and decisive, in direct contrast from what we had seen in the past couple weeks.

Then something changed, and Captain Kirk let Miami back in the game with a pick six touchdown. Cousins settled down a bit later (thanks to several defensive stands) and led the offense to a couple second half field goals. But it wasn’t until the final 40-yard touchdown pass to Aldrick Robinson that the unit regained the same swagger from the first half. Cousins finished the game 14 of 21 for 215 yards , two touchdown passes, one pick and a 112.2 quarterback rating. He still has more work to do, but he took a couple strides forward.

Kevin Stefanski experienced his first game as an offensive coordinator and play caller in the NFL on Sunday. It seems like a long time coming since he has been with the team for thirteen seasons. But he is only thirty-six years old, so we should probably pump the brakes on that notion. He replaced the 40-year old John DeFilippo this week and hit the ground running against the Dolphins.

Stefanski appeared to simplify the offensive and at the same time set them free. The trick plays were virtually nonexistent, Cousins called a lot of plays from under center, and the Vikings pile-drove a poor rushing defense with a very effective running game. The offense featured some aspects (such as rolling out the quarterback, emphasizing the running game, play action that opened up Tyler Conklin for a couple easy receptions, etc.) that folks inside and outside TCO Performance center have been calling for. It was a good start for Stefanski—but it only gets more difficult from here.

The defense started out like the unit they have become in the second half of the season. They dominate the Dolphins in the first half, giving up just three points in the first half after stiffening near their goal line in the last minute. But on the first play of the second half, running back Kalen Ballage went off tackle through a huge hole and raced to the endzone on a 75-yard gallop. The blown play appeared to have angered the defense, as they shut down the Ryan Tannehill and the Fins offense on the next (and final) six series, sacking the Miami quarterback and tackling running backs behind the line. Head coach Mike Zimmer dialed up some blitzes in the second half, and players such as Anthony Barr (two sacks), Danielle Hunter (two) Mackensie Alexander (one) and Eric Kendricks (one) teed off on Tannehill. This game, with the ground and pound on offense, and the stifling defense on the other side of the ball, was basically what Zimmer drew up for this game—and would like to see in the rest of them.

The offensive line/running game is perhaps the biggest story of the game. The head coach called for it, the fans craved it, players such as center Pat Elflein said all lineman prefer it and we finally got to see it. Some of the holes were huge and both Cook and Latavius Murray had fun running through them. In addition to Cooks stats, Murray carried the ball 15 times for 68 yards and a score. The offense rushed for a total of 220 yards (they had 100 yards rushing in the first quarter alone), which was their highest rushing total of the season. On pass protection, it was fairly decent, as Cousins was sacked twice and only hit four times. The offensive had a decent game (and they should have against this Dolphins defense), and they need a repeat performance next week in Detroit.

For all those fantasy football players hoping to win in the playoffs like they had all season with the Vikings receivers, the forecast was calling for ground and pound and that is pretty much what we got. Stefon Diggs had a nice game as Cousins number one target. On the game, he pulled in four receptions for 49 yards and the Vikings first touchdown. It was not the high powered throwing offense we have come to know, but it was a balance one that took advantage of the Dolphins defense throw the air and on the ground.

Head coach Mike Zimmer was getting a bit of grief this week for compiling a record of going through OCs, kickers and QBs like I go through New England style IPAs. That is four OCs and four kickers since 2016 and seven quarterback in his five seasons in Minnesota. These are some big numbers, but this week’s decision on Stefanski is looking pretty good today.

Cousins threw another pick-six in the game. Throw that in with the fumble that was a scoop and score by the Seahawks last week and Cousins took the lead in the NFL with most defensive scores allowed. He has more pick sixes this season than Aaron Rodgers has in his career. Something is amiss with number 8 on this regard.

Dearth of noon games at home. It seems like it’s been half a season since the last time the Vikings had a home game at Sunday noon (it was the Lions game on November 11). It is a glorious day in Minnesota (I met a couple media types from Miami who said it was okay if you stood in the sun), so why not play a day game. When you are good team, you play a lot of prime time games. Vikings won’t likely have as many of those games next season.