Checking in on Pre-Season Predictions 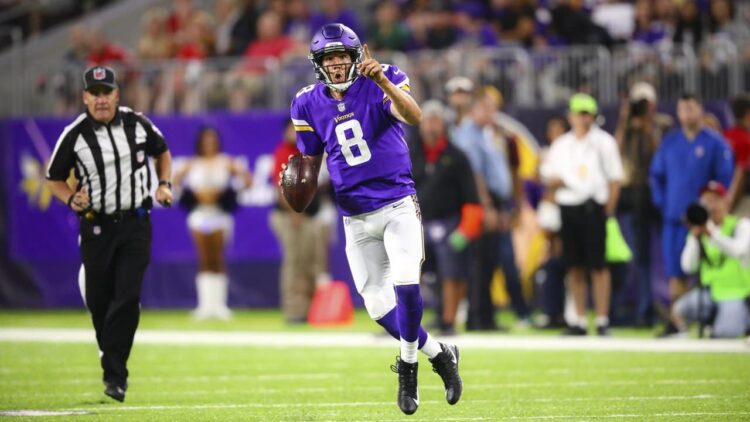 With the Bye Week in the Rear-View Window, How Do I Feel About Pre-Season Predictions?

Before the season began I published a couple predictions for the Vikings this season. And as the Vikings’ bye week was this past Sunday, that seems like a good time to reassess those predictions. Now, I am proud to say that not only was I (perhaps) the first Vikings writer in the game to verbalize a hope that the Vikings would open their wallets and land Kirk Cousins, but I was also a vocal defender of Cousins before the season when people began to question his fit for the team. Therefore, I had some pretty high hopes for the Vikings this season, and while I did expect a hangover from the NFC Championship loss to the Eagles, I felt more or less that the team would be… Spoiler Alert… right around where they are right now.

However, as you’ll see, I was mostly wrong about my expectations, which is why I’ve still avoided online gambling (now that it’s legal) on these sites–even though we do receive some great discounts from big players in the game like Caesar’s Casino (with their caesars casino bonus code).

If that’s something you are into, check that out. otherwise, let’s continue this relatively extensive explanation of how wrong I am on a regular basis.

That being said, I understand how amazing the regular season was last year, and I didn’t really expect the Vikings to best their 13-3 record from last season–mainly because I thought that there’d be some growing pains with Cousins coming in at quarterback and with offensive coordinator John DeFilippo implementing a new scheme. (So, I was right, and wrong . . . story of my life). Beyond that, while it’s always hard to really know how easy or difficult a schedule is in the offseason (as things change seemingly week-to-week in the NFL) it was relatively clear while looking at this schedule a few months ago that there weren’t a whole lot of easy stretches (or games) for the Vikings this season.

As a result, I predicted a 12-4 record for the Vikings (despite how high I was on Cousins and DeFilippo), and as of this writing, the Vikings are 5-3-1–meaning that they’ll basically have to win out to get around that record (as I didn’t see a tie coming). That might be difficult, but it does feel like the team is coming together both healthwise and also in terms of all three units playing well together. So, you never know. Beyond that (and more importantly), the Vikings may need to go 5-2 or better to make the playoffs depending on what happens Sunday (and with the rest of the NFC) to snag a wild-card spot, so keep that in mind.

To start the season the defense seemed to be a completely different unit from the one that was number one in multiple categories last season while, surprisingly, the offense seemed to be firing on all cylinders early despite the limited amount of time they were able to spend together this pre-season. Special teams struggled, as well, to the point that the Vikings cut their fifth-round pick in Daniel Carlson after he missed three field goals against the Green Bay Packers, including two in overtime that would’ve given the Vikings the win. Bringing in Dan Bailey, who at the time of his retirement was the second most accurate field goal kicker in NFL history, was a move that seems to be paying off as he’s gotten more and more comfortable (and thus more and more accurate) as the weeks have progressed, an improvement that seems to be mirrored by the defense.

The “Why” regarding the struggles on the defensive side of the ball have been broken down/analyzed often, and it seems that Zimmer and company came into the season attempting to call the perfect defense. That added even more levels of complexity to an already complex system, and it was those changes that seemed to be the crux of the issue for this defense–which has now returned to its former glory by simplifying things. As Luke Braun pointed out on the purpleJOURNAL Podcast, if you remove the Bills game from existence, this Vikings unit would be first in the NFL in a lot of categories and they’re seemingly improving week to week and discovering depth players (like Jayron Kearse and Stephen Weatherly) who have made the defense even more dangerous than it already was.

Even with that, however, it might be impossible for the Vikings to meet the second prediction I made this pre-season: that the defense would average 14 points allowed per game. Last season, the D allowed 15.8 points per game, and I felt that with the return of 10 of the 11 starters from last season there was little reason why the defense shouldn’t continue to improve, especially considering the fact that they’d be adding Danielle Hunter full-time to the right side of the line and Sheldon Richardson as the new member of the starting defense (which is a huge upgrade over even Shariff Floyd).

Beyond that, with the offense being capable of doing so much more than the Case Keenum helmed unit from 2017, it felt like the defense wouldn’t have to do as much as it did last season. Currently, the defense is allowing 22.7 points per game, which means that they’d have to allow less than two field goals per game to even get back to last season’s numbers (in terms of points allowed)–and while that could happen with a few shutouts, it’s not going to. That’s almost a touchdown (and extra point) difference, at 6.9 points.

With the recent focus on the run game, Cousins (along with Adam Thielen) hasn’t had to do everything himself. As a result, his numbers have waned a bit, and the national media have begun to say that the Vikings made a big/expensive mistake in bringing him here and that he was doing what he “always does,” which is put up numbers in garbage time while the team loses.

That is something that anyone who has watched this Vikings team will easily know is nonsense, but it’s because of some of the struggles this team has had that narratives like that can begin. With the Vikings winning three of their last four games, it’s something that we’ll hopefully hear less and less. Now that the NFL flexed Sunday’s game against the Chicago Bears, we’d better hope that Cousins plays well (and doesn’t turn the ball over), otherwise we’ll hear a ton of that narrative (especially considering how the Vikings–New Orlean Saints game played out).

With (arguably) the toughest part of the Minnesota’s schedule starting this Sunday night in Chicago, the Vikings will show whether or not they’ll be able to hit at least two of my three predictions (those being the record and Cousins’ individual accolades). They will have to show it in a game that they might have to win if they want to make the playoffs (a wild-card berth might require 10 or 11 wins in the NFC). So, tune in . . . to see if I’m right? Because I’m sure everyone cares so much about that. For the record, I did predict a Vikings loss on Sunday, but I’d love to be wrong, as that (apparently) is in line with most of my predictions this season.