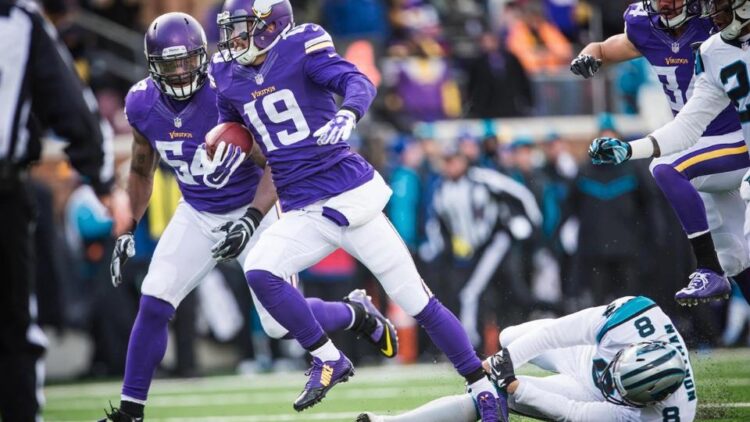 When it comes to people I’ve been lucky enough to interact with over the years I’ve been doing this whole Vikings Territory thing, I’m hard pressed to think of anyone with the same combination of talent and kindness as Daniel House of Vikings Corner.

So, of course, Daniel was kind enough to take a break from his own Vikings coverage (and Gophers football coverage at 247) to stop by and drop some knowledge on us in what is our latest installment of our “Three Questions” series.

First, in case you missed it, here is who we’ve had take part so far:

Christopher Gates On London, Those Calling For Zimmer’s Job, & Minnesota’s Most Exciting Player

Nik Edlund On Kalil’s Injury Impact, A Possible Vikings Draft Target, & The Play Of The Year

Alright, and now we see what Daniel House has to say…

1.  I know you are among the most die-hard of Vikings fans. With that being said, do you have a team you’re pulling for in the playoffs this year?

[pull_quote_center]Well, as I’ve been progressing as a journalist over the last few years, I’ve learned the importance of objectivity. I look at the entire league as a whole and not just specifically the Vikings. With that being said, the Atlanta Falcons are a very intriguing team nobody is talking about. Matt Ryan had a career year, the Falcons offense was the top unit in the league, and their defense is performing better than I anticipated. They led the league in points per game (33.8 points per game), yards per play (6.7), and per-drive scoring rate (52.6%). Their secondary is my biggest worry (bottom half of passing yards allowed per game), but if a team gets into a shootout with them, their offense can keep up. The NFC is wide-open and I think Dallas is definitely a team that can be beaten, especially if they match up with the high-powered Atlanta offense. The Falcons deserve to be respected and have a chance to make a deep run in the playoffs.[/pull_quote_center]

2.  Every preseason we talk about certain players possibly taking “the leap.” Which player do you think progressed the most during this really tough 2016 season?

[pull_quote_center]It’s clear to see the hard work wide receiver Adam Thielen put into becoming a better player in the offseason. Every year, I saw a progression from him in training camp since he joined the Vikings. His route running was sharper, his ball skills improved, and he nearly eclipsed 1,000 receiving yards during the season. The hard work players put into being great is such a critical aspect of taking “the leap.” Thielen was getting open on talented defensive backs and managed to haul in some very difficult grabs in traffic. It is very fascinating to see the strides Thielen made. He went from a special teams ace to a leading receiver within three years. It’s all because of his work ethic and attention to detail that shine through every day he sets foot on the field. I think some of these traits rubbed off on his friend Cordarrelle Patterson as well. Patterson showed he can make an impact on offense and his consistency as a route-runner improved after many years of frustration as people waited for him to take the next step. Both Thielen and Patterson are free agents and the Vikings need to re-sign both of them. They have developed the perfect model for Laquon Treadwell to follow as he works in the offseason to improve as a player. I’ve seen Treadwell’s work ethic firsthand and I still believe he has the chance to be a contributor in this league. People are far too impatient with a 21-year-old wide receiver right now. He isn’t going to be an elite wide receiver overnight.[/pull_quote_center]

3.  Looking at the free agent possibilities across the league, which potentially-available player from another team would you most like to see in Mankato this summer?

[pull_quote_center]Yes, I’ll start with a former Green Bay Packer as I discuss free agency options. Interior offensive lineman J.C. Tretter can play guard or center and was lost in the shuffle of a talented Green Bay front-five. Tretter’s intelligence as a player is his most impressive attribute. He is a smart, athletic, and does a very good job of getting to the second level to pave rushing lanes for running backs. He won’t break the bank and will receive a mid-tier contract the Vikings can afford. I’ll have a post on Vikings Corner detailing my plan for fixing the offensive line very soon.[/pull_quote_center]

For more great insight from Daniel House be sure to check out his work at Vikings Corner, Gophers 24/7, and follow along with him on Twitter.