Vikings Bookends Need To Stay Off The Shelf 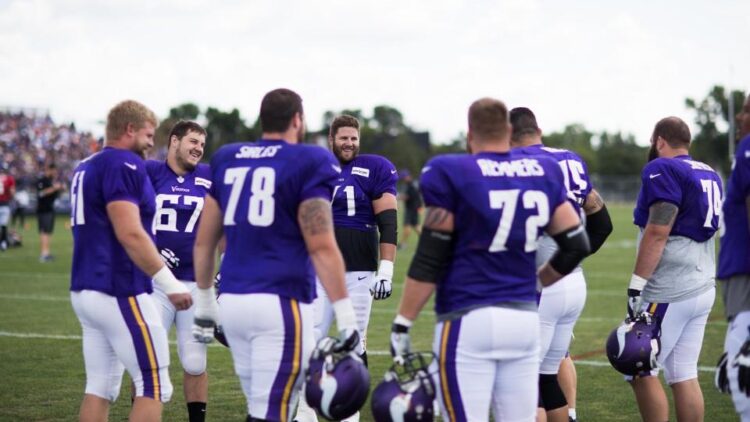 Vikings Bookends Need To Stay Off The Shelf

Under head coach Mike Zimmer, the Minnesota Vikings have quietly become one of the best NFL teams on paper. In reality, the defense is legitimate. Last season the Vikings ranked third in the NFL in total defense.

Today, three of the team’s best defenders are the beneficiaries of contract extensions, making them Vikings for life. Furthermore, the Vikings offense, which sputtered last season, now has the personnel to establish a refreshing new identity, post Adrian Peterson.

So, what could keep this ‘great’ team from reaching the playoffs and making a run at Super Bowl 52 in their home state? The Vikings’ Achilles heel…the offensive line.

Sports Illustrated contributor Peter King said the 2016 Vikings offensive line play was the worst he’s ever seen in his 34 years covering football. The team’s rushing attack was the last in the NFL, the Vikings had the league’s lowest average depth of target, and Sam Bradford was sacked a career-high 38 times.

As King stated, if the team cannot protect the signal caller, it doesn’t matter if Bradford, Teddy Bridgewater, or a combo of Case Keenum and Taylor Heinicke is starting at quarterback.

This offseason, in an effort to improve the offensive line, Vikings general manager Rick Spielman and his staff made multiple moves and spent lots of money to acquire new players.

The offensive line was overhauled. Only one player (Boone) is starting at the same position (left guard) as last year. After the offseason transactions, the team appears to have bolstered the interior of the line and moderately upgraded the tackle position. The depth at tackle, however, is still dangerously thin.

To make things more concerning, left tackle Riley Reiff was out most of training camp nursing a back injury. He returned to practice Monday after being out since July 27th. Coach Zimmer said the injury isn’t serious.

His backup, Rashod Hill, went down with a hold-your-breath kind of injury in Saturday night’s scrimmage. He appears to fine now, as well. However, if Reiff’s back injury lingers, Hill, a second-year player signed off the Jacksonville Jaguars practice squad last season, would take his place as the starter.

With the training camp injury scares and a considerable drop-off in talent behind the starters, signing a capable offense tackle to backup Reiff and Remmers would provide a stress-relieving exhale when it comes to tackle depth. Unfortunately for the Vikings, it’s easier said than done.

Here are the best offensive tackle options still available in free agency, according to NFLTradeRumors.com:

While highly unlikely, the Vikings would be the team to experience bad luck, again, when it comes to offensive line injuries. Five players lined up at left tackle for the Vikings last season. Adding another veteran body that can be a clear upgrade to Hill and/or Beavers would be ideal, but at this point it’s far-fetched.

There’s not much to like about the current crop of free agents, hence them being free agents. If the team liked one of these players they would have brought him to training camp.

There will only be one roster reduction this preseason, from 90 to 53 players. When teams trim their rosters, the Vikings could sign an available tackle that improves their depth. However, because of the limited amount of talented NFL tackles, teams will keep the good ones, so the pickings will be slim. Teams must have their 53-man rosters set by September 2nd.

The Vikings could explore trading a receiver like Jarius Wright or a veteran defensive linemen like Shamar Stephen for an offensive tackle with some upside or experience. Due to limited trade targets, this scenario is unlikely.

The best option for the Vikings is to stand pat with the players they have, monitor the waiver wire, and hope for a healthy season from the revamped offensive line.