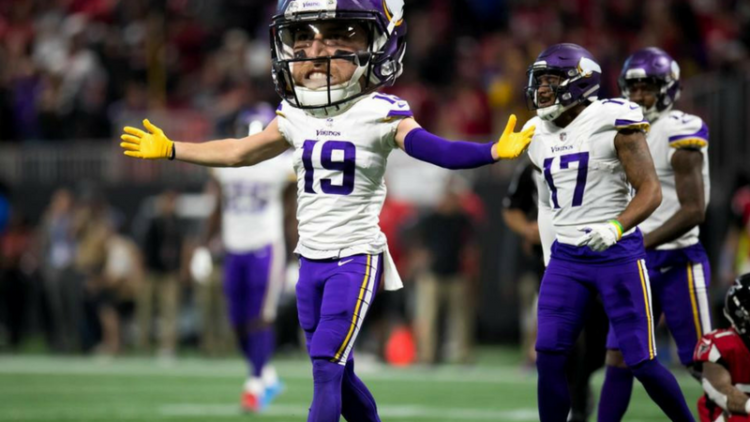 I just want you guys to know that this really does mean a lot to me. I remember reading mailbags growing up — Rhett Bollinger in particular — and thinking about how friggin’ awesome it would be if I could get to a place one day where people wanted me to answer their questions.

Sincerely, this is fantastic, and I’m just so happy to be here.

We got a hashtag-loaded opening bag here featuring some Teddy action, a few thoughts on the ascension of wide receivers Adam Thielen and Stefon Diggs and plenty more!

How could you possibly like Teddy Bridgewater more than Case Keenum & call it "objective analysis"? #VTMailbag 💼💪🏻😒

First and foremost, let’s all give Mr. Brown here a round of applause for starting the #VTMailbag hashtag. Make sure you’re following Jayson‘s work at Climbing the Pocket and where ever else he shows up on your Twitter timeline. Nice guy, knows his sh*t and a willing user of sarcasm font. Thanks for being here Jay.

Back to business. I’m going to dance around this question a little bit because I feel like the wording here makes it sound as though I enjoy the person Teddy Bridgewater more than Case Keenum. That’s simply not true. These dudes are both absolute studs who work their you-know-whats off and love making jokes. Team-oriented guys with mega passion for the game — You can’t deny that, folks.

That said, I do believe Bridgewater has more natural ability than Keenum. This doesn’t necessarily mean that Bridgewater will have a better NFL career — Uhhhhhh Tom Brady??? — I’m simply stating that the former Louisville slinger has all the physical tools and quite possibly the most marketable mental makeup that I have come across during my tenure as a Vikings fan.

I love Teddy as much as the next guy, but for now, Keenum is the starting quarterback — and I’m very, very OK with that. You see this dude ball out lately? He responds to adversity as well or better than anyone. He is a fiery competitor with a humongous chip on his shoulder. I just want to know who pissed him off first cause the dude has been on a warpath basically since his football career began. Houston’s college program probably isn’t what it is without Case, and the Vikings aren’t the Vikings without Case this year.

These are facts, folks. If Bridgewater hadn’t gotten hurt, things may be different. But, unfortunately, he did, and now it’s Case’s turn. And unless something happens to him — you stay away from my quarterback Mike McCarthy — Teddy will continue wearing his helmet on the sideline watching and preparing to play at a moment’s notice.

Speaking of people you should be following on Twitter Dot Com … make sure you’re checking in with my guy Josh Zimmer every now and then. Former Minot State defensive lineman and passionate NFL draft analyst:

Annnnnd we’re back. As I told Mr. Zimmer here on the Twitter machine, he — and the rest of you guys — know the answer to this question: Never.

Look, let’s just be straight-up here: There are a ton of people who comment on football games that have nothing to lose (fake name on Twitter or something) and/or don’t have a damn clue what they’re talking about. I believe that Vikings fans, as a collective unit, are very intelligent. For every dumb comment I read there are four or five brilliant responses. But that doesn’t mean the dumb commenters don’t exist.

Hell, I think even a couple of my friends would tell you they enjoy watching the Vikings and football in general, but they are completely reactionary fans. They get hyped when Minnesota wins and they overreact when they lose. That’s how it works. Welcome to football fandom.

More to the point though — having a background in football is pretty important for thorough analysis, in my opinion. Now, that doesn’t mean that you can’t get super friggin’ good at football stuff without playing the game — I mean, have you seen some of the ladies out there putting up fantastic work on a regular basis? We can start with former Vikings Territory Dot Com stud Lindsey Young, so it’s certainly not a requirement to play the game, but playing the game certainly embeds a specific mentality into your mind. I sucked a*s at playing football. Seriously, ask any of my coaches, any of my friends, any Cretin-Derham Hall football fan that followed the 2009-10 season — No. 99 didn’t know what the hell was going on. But I was listening and paying attention. My team meant a lot to me because winning it all meant the world to my friends on the team, specifically the quarterback who is an absolute beast now in the NHL if you haven’t heard. Oh, and by the way, we did win. Well, the guys on the field won, and I got a ring for hanging out.

And that’s a large part of why I have a fairly good understanding of how coaches think and how athletes compete. But the same cannot be said for a lot of people — people who just want to see the world burn. If nobody holds you accountable, why wouldn’t you just say whatever the hell you feel?

So, unfortunately, people will continue to throw sh*t at Teddy for, literally, doing his job to the best of his ability. If I see it, I’m going to fight you. That will be all.

“It seemed to me that after Diggs’ groin injury, Thielen surpassed him for the #1 receiver role. Do you think this is what really happened? Was Thielen really the #1 guy all along? Is he really even now?”

Thanks for the question Doc, this one should be fun.

The beauty here is that there really isn’t a correct answer. Both Thielen and Diggs have all the skills necessary to be impact wide receivers in this league. Whether it’s blowing dudes out off the line of scrimmage or contorting their bodies at the last possible moment, Thielen and Diggs know what’s up when it comes to getting wide open. They can both attack defenses from the outside and inside of the formation, allowing them each the capacity to take over a game.

So, really, does it matter who is the first read? No, no it doesn’t, and on top of that, offensive coordinator Pat Shurmur clearly designs specific plays for both athletes. Point being, on some plays you’ll see Diggs as the “No. 1 WR” and on others Thielen is the guy.

If you’re going to force me to pick one over the other, I guess I’ll take Thielen but that’s 100% based on the fact that Diggs has had trouble playing 16 games. I think they are both phenomenal athletes, and fans should be celebrating the existence of executive vice president Rob Brzezinski for locking down Thielen to a team-friendly contract, allowing the opportunity to keep both of these formally under-appreciated beasts.

“How do I decide which of their jerseys to buy? I love Diggs and his attitude and the way he celebrates first downs. But like Thielen, I grew up as a white Minnesotan who practiced the Cris Carter sideline toe drag every Sunday. It’s a real toss up. Thoughts?”

I love being asked this question. It’s honestly one of my absolute favorites — especially with so many great options across the board. My rule of thumb for buying jerseys is four-fold:

So, by this rule, I’d have to go with Thielen.

He’s very marketable — especially that whole Minnesota native thing that broadcasts never, ever talk about, which essentially means he has a likable personality while also playing some damn good sports, in my not-so-humble opinion. He’s under contract through 2020, per Over the Cap, and there are definitely people who are still sleepin on him.

(It’s worth noting that I probably bought the first Stefon Diggs jersey ever, so I could just be leading you astray here. You really can’t go wrong though, let’s be real.)

“My name is Travis Rothstein I just graduated from UW-La Crosse and been an avid Vikings fan my entire life. Just recently started following you and I really enjoy your work. So I just wanted to say keep up the good work.

“I believe we can compete & beat any team in the league, because we don’t have too many glaring weaknesses. What do you think our biggest weakness is? I say special teams. All around I haven’t been too impressed with the consistency with them. Which surprises me because I think Priefer is a wonderful coach.”

Thank you for your kind words Mr. Rothstein. Happy to have you on Team Shut Everybody Up. #SEU.

I’m going to dance around this question a little bit too. As of the middle of Week 13, I honestly don’t see any significant weaknesses on the Vikings’ roster. Now, that doesn’t mean sh*t won’t hit the fan at some point cause of Minnesota sports, but as it stands on December 6th, 2017 at 6:29 AM, your Skoldiers are about as complete as they come, in my not-so-humble opinion.

Early in the year the biggest weakness was probably cornerback Trae Waynes or guard Nick Easton, but both guys have progressively gotten better throughout the year and do much more good than bad for this team.

According to Pro Football Focus, Easton (39.2) and Eric Kendricks (42.1) are the greatest weaknesses on the Vikings offense and defense, respectively. I understand Easton’s grade — to a degree — but I think the Kendricks grade is absolutely insane. That dude has been a beast all year and definitely ranks top-3 on the Vikings all-hair team (right up there with Head & Shoulders Model-to-be Dave Morgan and Bae Waynes).

So, again, there really isn’t a “correct” answer here, but there are some opinions that are better than others — if that makes sense. End of the day, I don’t think any one player is hurting this team — right now — but that doesn’t mean someone won’t get torched by that bad man Cam this weekend and change my opinion.