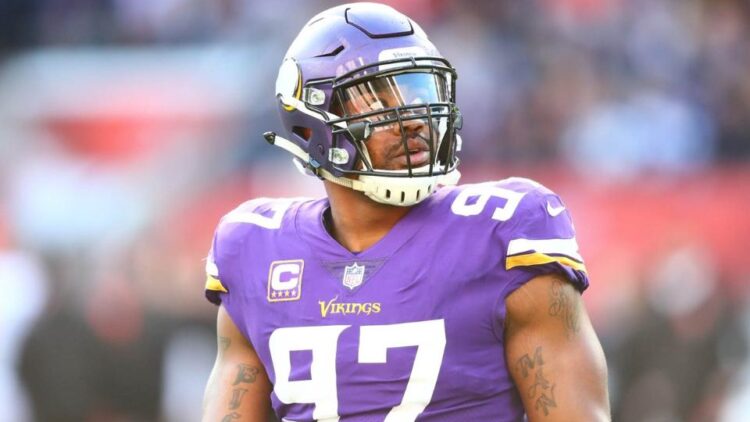 The Vikings vet is in the zone — a quick look at whether the Minnesota Vikings’ schedule will allow him to make a run at the NFL’s single-season record for sacks.

Vikings defensive end Everson Griffen is in good company. He is now tied with two team legends — Jared Allen and Jim Marshall — for most consecutive games with a sack. Griffen has at least one sack in all eight games this season, which is tied for the franchise record. The last time a Viking accomplished the feat, he finished a sack short of the NFL record.

That got me thinking… is Griffen capable of breaking Michael Strahan’s single-season sack record?

Griffen was named NFC defensive player of the month following his performance in October. Throughout a five-game stretch during the month of October, Griffen recorded six sacks, two forced fumbles and 18 tackles. His six sacks were first among NFC defensive linemen.

The Vikings followed suit, as they went 4-1 and took over first place in the NFC North.

It marks the second time the two-time Pro Bowler has earned this recognition. In 2014, Griffen was also named NFC defensive player of the month for October. He finished the 2014 season with 12 sacks, a career-high.

Similar production over the next five games would easily lead to a new career-high in sacks for the NFC defensive player of the month.

The road ahead is not an easy one for Griffen, but there will be some mismatch opportunities.

Here’s the remaining schedule for the Vikings. I’ve listed the opposing left tackle scheduled to match up against Griffen, their current ProFootballFocus grade, and how many sacks the bookend has given up so far this season (courtesy of FoxSports.com):

***Trent Williams is currently nursing a lingering knee injury. He is debating whether or not to undergo season-ending surgery. Ty Nsekhe, William’s backup, is also injured (core muscle injury). Washington’s current starter at left tackle is none other than former Viking TJ Clemmings (PFF grade: 41.8).

It’s obviously impossible to predict when a player get a sack, but’s it’s fun to try! Weeks 10, 12, 14 and 15 are all appealing matchups for Griffen. If he’s able to keep up his current pace and record multiple sacks in one or more of those games, he could put himself within reach of history.

Michael Strahan has the NFL record for sacks in a single season with 22.5.

Many Vikings fans remember when retired Viking Jared Allen came up just half a sack short of the record in 2011. Allen’s 22.0 sacks in a single season remains tied for second all-time.

This time around, Griffen has his work cut out for him. He has a few things working in his favor including disruptive teammates that draw double teams, as well as a fun coincidence: both Strahan and Allen posted career-high sack numbers in their age-29 seasons. Griffen is, you guessed it… 29 years old. The eight-year veteran is currently tied for second in the NFL with ten sacks.