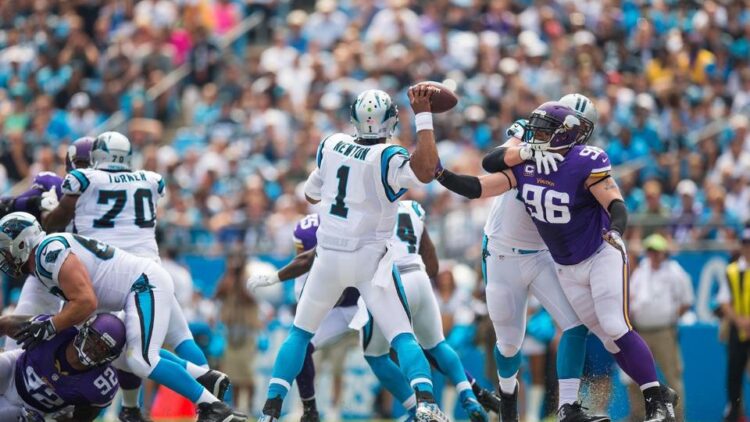 The Minnesota Vikings landed Riley Reiff yesterday without knowing where he’d play tackle. Reiff has the unique qualification of starting on both the right and left side, giving the Vikings flexibility in future free agency pursuits.

If today’s reports are accurate, the Vikings see Reiff as the left tackle for the foreseeable future. According to Pro Football Talk, former Carolina Panthers tackle Mike Remmers is set to visit the Vikings this afternoon. Remmers will visit Minnesota today and Houston tomorrow (if necessary) but is expected to play right tackle wherever he signs.

Last season, Remmers started 16 games for the Panthers, with most coming at left tackle in relief of the injured Michael Oher. He allowed nine sacks and 49 quarterback pressures, per Pro Football Focus. The numbers aren’t encouraging, but Remmers’ departure from Carolina signals a fresh start at right tackle for the five-year pro. Matt Kalil‘s arrival in Carolina also precludes Oher’s move to right tackle, thus squeezing Remmers out of the team’s plans.

Those in Minnesota likely remember Remmers as a tackle on the wrong end of Minnesota’s eight-sack performance against the Panthers in Week 3. However, Remmers spent a month with the Vikings at the end of the 2013 season and had some added familiarity with the front office, which could help in today’s contract negotiations.

In Minnesota, Remmers would practically walk into a starting role with the Vikings. The situation at right tackle is prime for a reboot and in desperate need of stability. Last season’s starters of Andre Smith, T.J. Clemmings, and Jeremiah Sirles hardly inspired confidence; if anything, their collective performance highlighted a need for aggressive free agency action.

To land Remmers, though, they’ll need to keep him from taking off from Minneapolis-St. Paul International Airport. Houston also presents a prime opportunity to start, as the Texans lost incumbent Derek Newton to gruesome knee injuries and enter 2017 with Chris Clark penciled into the role. The team was linked to Ricky Wagner earlier in the week, but like the Vikings fell behind the Lions in an expensive bidding war.

An undrafted tackle out of Oregon State in 2012, Remmers started all 32 games for the Panthers the past two seasons. He signed a one-year, $2.553 million contract with Carolina last year and should come at much lower price than Reiff.

Join the fun on the Vikings Territory live blog!