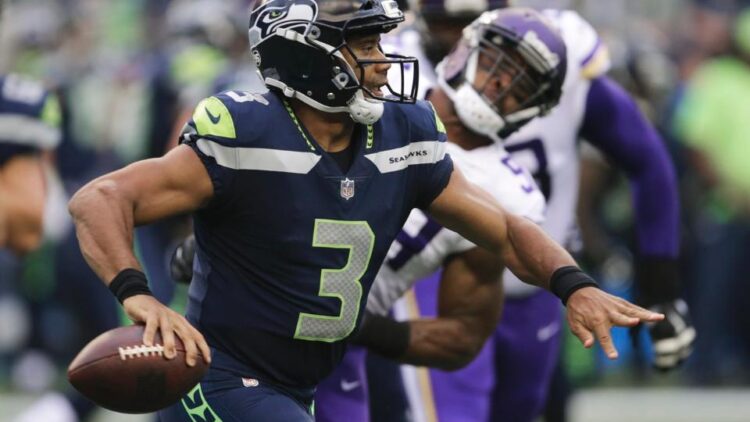 Despite what happened in Seattle on Friday night, Mike Zimmer’s secondary isn’t suddenly a weakness.

Seahawks quarterback Russell Wilson tore through Minnesota’s first-team unit, lighting the Vikings up to the tune of 206 yards and two touchdowns. His performance — one of midseason form — put the Seahawks ahead and kept them there, as Seattle went on to defeat Minnesota 20-13.

It was an ugly, uncharacteristic outing by the Vikings, marred by a few-too-many mental lapses early in the game. Granted, Zimmer was down two starters (Andrew Sendejo and Trae Waynes) in the secondary, but it was the players on the field making the mistakes. From the linebackers to an arguably thin group of cornerbacks, few stepped up against one of the NFL’s more dangerous quarterbacks.

“We got to do better in the coverage aspect,” Zimmer said Sunday, per Ben Goessling. “We had, I think, two or three twenty-yard or more plays, so that’s going to be a big point of emphasis for us.”

Last year, opposing quarterbacks completed just 20 passes of 21 or more air yards against the Vikings all season. On Friday, Wilson connected on three such throws, with five gaining more than 20 yards, either through YAC or through the air. As Goessling notes in his story, the Vikings were toying with new coverages during the game, which may have led to the blown assignments.

“We were working on some different coverages in that game,” Zimmer said. “I think we need to continue to get that,” he added.

One game does not a season make, though, especially in the preseason. Many of the players highlighted in the film below are in their first or second years, some learning new positions and some transitioning to the speed of the professional game. Others, like Xavier Rhodes, win most and lose a few, as evidenced by the spectacular throw-and-catch required to beat him down the field.

At full strength, the secondary remains one of the best in the league, and Minnesota’s starting corps of linebackers has a real stake to the “most athletic” claim in all of football. Obviously, that doesn’t make the collective defense unstoppable, and many of the issues exposed on Friday could pop up during the regular season.

Hopefully, these blemishes are temporary consequences; a combination of rust, inexperience, and development as Zimmer continues to mold his perfect starting-11.

Rhodes doesn’t deserve much, if any flack for his coverage in this example. The wide receiver, rookie Kasen Williams, made one of the better plays you’ll see all preseason, which seems to be the requirement for a catch when facing Rhodes. Lined up in man coverage, Rhodes stayed in Williams’ hip pocket all the way down the field, maintaining perfect position without additional help over the top from the safety.

Wilson likely recognized the one-on-one matchup pre-snap, making the decision to throw the football before beginning his cadence. Once snapped, Wilson never took his eyes off Williams, throwing the football upon hitting the back of his drop.

For every step Williams took, Rhodes was right there with him. He matched every one of the rookie’s movements, from the extended arms to the choppy feet. For most quarterbacks, throwing into this tight of coverage almost always leads to disaster, but not for Wilson. The Seahawks star turned the route into a back-shoulder concept, placing the ball in a spot where no one should have caught it.

Williams did, though, hauling in the throw with an impressive, acrobatic one-handed snag. Even with Rhodes draped across his shoulders — and an arm in his line of sight — Williams found a way to contort his body and come down with the game’s first splash play. It’s not as if Rhodes erred in his responsibility; he was right where he needed to be, making every attempt to break up the pass.

Not so much on the next play, unfortunately. The preseason’s made for players to take their lumps and learn from their mistakes, and second-year starters like Mackensie Alexander need this time to get all the bad reps out of their system. The example above is just that; an error Alexander would love to take back when he’s watching film this the week.

The Vikings appeared to be in a Cover-4 alignment, with Harrison Smith blitzing as the inverted safety in the box. He rushed the passer on the play, shifting responsibilities with Terence Newman as one of four deep-zone defenders. The other three included Rhodes, Alexander, and fill-in safety Antone Exum; all responsible for their own “quarter” of the field.

Alexander lined up over Doug Baldwin in the slot, giving the initial impression of man coverage. Earlier in the game, Baldwin had put Newman on skates, making the potential assignment that much harder for Alexander. And at the snap, Baldwin embarrassed Alexander with the savvy route running he’s perfected in recent years with Seattle.

At the snap, Baldwin took his stem vertical, disguising where he’d break off his route. Once he reached the top of his stem, Baldwin gave Alexander a subtle head fake and stutter step to the outside, completely turning the young corner around in coverage. This fake created natural separation for Baldwin, who planted his foot and worked his way to the middle of the field — an area the Vikings struggled as a whole to defend on Friday night.

As he had in the previous example, Wilson recognized the coverage error and released the ball well on time and in-rhythm. While Alexander may have technically been within his designated zone, no corner should ever turn his back and run down the field without the immediate threat of a receiver. Alexander’s “bite” took him completely out of position, opening a massive void in Minnesota’s zone coverage.

Blaming Alexander wholly for the mistake would only serve to discredit Baldwin’s abilities. Seattle’s top receiver is criminally underrated, and his limited showing last week only bolstered his reputation as a technician. He shook every corner not named Rhodes, using subtle techniques and clever footwork to leave himself comfortable space on almost every route.

Still, Alexander is stepping into a prominent role with the Vikings, and in year two, shouldn’t be making such mistakes, even against top-flight competition. He’s expected to replace Captain Munnerlyn this season, who while in Minnesota established himself as a premier nickel cornerback. Given the Vikings’ propensity for subpackages and two-linebacker sets, Alexander can’t afford similar mental mistakes when games begin to matter.

The final two examples should be bunched together, as they highlight Minnesota’s repeated inability to defend the middle of the field. In both instances, the weak-side linebackers — Ben Gedeon and Edmond Robinson — fail to properly carry the tight end and receiver to the next zone.

Both Gedeon and Robinson are initially responsible for defending the hook-to-curl zone; the area of the field often associated with drag routes, crossing patterns, and quick-hitting concepts. If any player runs vertical through the zone, that zone’s defender should always “carry” them to the next protected area of the field. In this case, that’s the deep half or quarter.

While trailing, the linebacker should also look to the No. 1 receiver, or the receiver closest to the sideline. If he breaks inside, for example, he’s now that linebacker’s responsibility. It’s difficult to tell, but it appears as if the Vikings were in some sort of pattern-matching concept, which asks the linebacker to play the seam-curl-flat responsibilities.

As such, Gedeon and Robinson should have defended the seam, watched for any curl defenders, and driven to the flat had there been a throw there. And in both instances, the linebackers appeared to speed up the process, dropping off the seam before adequately securing the zone with the deep defenders. The split-second decision to chop their feet and turn their shoulders to the line of scrimmage created a window for 20- and 36-yard gains on Robinson and Gedeon’s snaps, respectively.

At this point in the game, Wilson was playing catch with his receivers against Minnesota’s second-string defense. Gedeon has a chance to replace Chad Greenway at the position this season, but he’ll have to get more comfortable in coverage if he’s to play a prominent role for Zimmer at weak-side linebacker. Robinson’s in the same boat, but he’s had three years to hone his technique and is arguably behind Gedeon in the race to start.

Zimmer’s “war chest” of defenders is filled to the brim with able-bodied, and intelligent players. Many of their mistakes against the Seahawks were of the mental variety; lapses in judgment and a failure to trust the concepts Zimmer’s implemented since taking over in 2014.

The unit isn’t lacking for talent, and many of the issues that surfaced Friday are correctable. The younger players looked especially uncomfortable and unsure of themselves against Seattle’s first-team offense. That’s expected in the preseason, but also an unfortunate sign when presumed starters like Alexander are making the same, simple gaffes.

Time to panic? No. Zimmer remains a defensive guru, one who continues to maximize the talent up-and-down the depth chart. If and when these issues crop up during the regular season, by all means, panic away. But next week, against the hapless San Francisco 49ers at U.S. Bank Stadium, Zimmer’s defense should have ample opportunity to flex its sizable muscles.