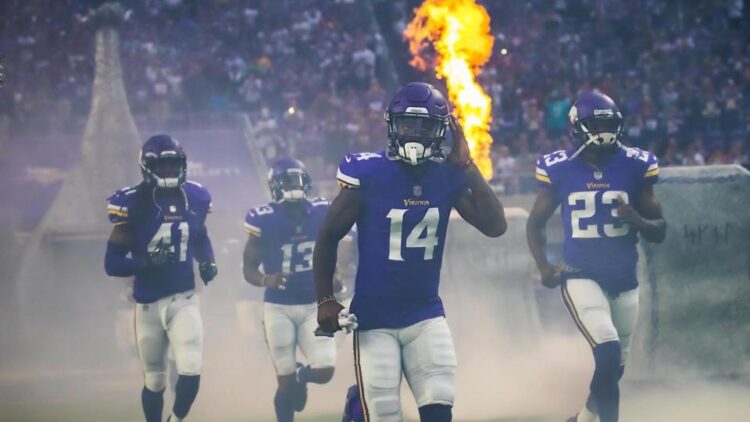 Vikings Territory content maker Drew Mahowald recaps the preseason and delivers the fourth Skol Scale reading of 2017. (NOTE: This was originally published before the the Tramaine Brock trade was reported and has since been edited.)

I warned all of you about this in my last Skol Scale post.

And yet, here we are.

The Minnesota Vikings have wrapped up their preseason, and now it’s time to ball. Actually ball. In games that matter.

I warned the fantastic and loyal readers of Vikings Territory about jumping to conclusions after preseason games. It’s unhealthy and causes unnecessary fluctuation of the heart rate. Preseason results do not correlate to regular season results. But you did it anyway.

Sure, it’s fair to identify a few things that need to be corrected. Minnesota’s first-team offense produced three points in 11 drives this preseason, which is obviously not ideal. But we did see some good things — the running game looks much better, the offensive line looks somewhat stable and the Vikings’ top two draft choices look like reliable contributors immediately.

The preseason is finally over, cuts are being reported as this is written and it’s now time to focus on regular season football. Preseason games are no time to gather knee-jerk reactions, but a few noteworthy observations were brought to the surface, both good and bad, that should have an impact on the Vikings’ success this season.

HEALTH: The Vikings won the preseason because of this right here. Relatively speaking, the Vikings are in as good of shape as one could ask. The absence of Kyle Rudolph throughout much of preseason is the only real issue the Vikings had with regards to injury. As Week 1 rolls around, the Vikings should be at maximum health (barring a catastrophic non-contact injury or something).

Danielle Hunter looks like a superstar: While the team generally underperformed in preseason, Danielle Hunter picked up right where he left off in 2016. He was a force both against the run and rushing the passer, using his cartoon-like frame to set the edge effectively and throw opposing linemen. Expectations are unbelievable for Hunter this season, and I’m starting to believe he’ll meet them.

Slick Rick’s 2017 picks impress: Vikings general manager Rick Spielman’s draft record has been impressive he took over full time a few years ago. His 2016 picks have not panned out in the least bit, so the pressure was on to draft successfully in 2017. So far, he’s earned good reviews. Dalvin Cook looks like a feature RB1. Third-rounder Pat Elfein has been excellent at center and it presumably the starter there. Fourth-round linebacker Ben Gedeon emerged as an expected candidate to start at weak linebacker and may win the job. Jaleel Johnson has been a bowling ball crushing offensive linemen like bowling pins against the run and the pass. And of course, seventh-round wide receiver Stacy Coley looks like Stefon Diggs lite.

Undrafted Free Agents step up: Spielman and his scouting department didn’t just find some gems in the draft. It appears as if a couple of their undrafted free agents have made a very strong case for a 53-man roster spot. Former LSU Tiger Tashawn Bower will almost certainly be on the roster as the team’s fourth defensive end after a lights-out preseason. Additionally, Eric Wilson has a strong chance to provide linebacker depth and special teams production after being undrafted out of Cincinnati.

Pass Protection: Shocking, right? The Vikings struggled to protect Sam Bradford, Case Keenum and Taylor Heinicke throughout preseason. For as good as Mike Remmers is as a run blocker, he’s as much of a problem in pass protection. If there is good news here, it’s that the protection is improved from 2016 — which we should be able to live with.

Cornerback Consistency: Outside of Xavier Rhodes, there’s not a whole lot to be excited about the secondary. Minnesota did just acquire Tramaine Brock in a swindle of a deal with Seattle to help the cause. However, Mackensie Alexander and Trae Waynes showed their deficiencies plenty in preseason and Terence Newman remains older than sliced bread. This secondary will surely struggle, but the addition of Brock will ease the pain.

NOTE: The Skol Scale figure was 6 prior to the report of the Tramaine Brock trade.

The same strengths the Vikings boasted before camp are still intact — a nasty front four, elite playmakers on every level of the defense and several new contributors that should lift the team’s offensive efficiency.

On the flip side, the same question marks persist — the offensive line, the slot cornerback position and the weak side linebacker spot are all reason for concern.

Ultimately, this is a team that has several proper pieces in place to contend for an NFC North title. But some of the weaknesses are easily exploited, and how easily the Vikings hide them will determine how much success they have.

line still scarey. Remmers, going to be a liability, Boone has looked awful, and Rief is just a bandaid. Still gunna have rough run game

8.3 give me the purple kool aid

I'm at about a 6.I'm excited for the season to start,but I'm worried about the OL & our CB's.

7.5 Haven't seen a difference in the offense…

Be sure to check out Episode 101 of the About the Labor podcast, where Drew Mahowald and BJ Reidell make their 53-man roster predictions.