The Minnesota Vikings are 5.5-point underdogs in their Week 2 matchup with the Pittsburgh Steelers, according to My Bookie. If you would rather bet straight up, the Vikings are +195 underdogs against the Steelers, who are -245 favorites.

Minnesota looked the part of a team that can contend with the likes of one of the AFC’s best teams in a Week 1 Monday Night drubbing of the New Orleans Saints. Meanwhile, the Steelers squeaked by the lowly Cleveland Browns by just three points.

Still, the odds appear to give Pittsburgh the benefit of the doubt. The Steelers did earn a spot in the AFC Championship just nine months ago before falling to the eventual Super Bowl champion New England Patriots. Additionally, the Steelers boast arguably the top two skill position players in the NFL in Le’Veon Bell and Antonio Brown.

Bell, Brown and two-time Super Bowl champion quarterback Ben Roethlisberger give the Steelers the reputation as one of the best offenses in the NFL — which is why this game could be a high-scoring affair.

My Bookie’s over/under total is listed at 45.5, which seems slightly low considering the teams combined for 50 last week. Specifically, Minnesota missed several chances in the red zone to get in the end zone and instead settled for field goals. The oddsmakers seem optimistic about the Vikings defense slowing down the high-octane Steelers offense and turning this game into a relatively low-scoring affair.

The Vikings and Steelers have squared off in 17 previous regular-season matchups. Minnesota owns the all-time series lead 9-8 and won the teams’ last meeting back in 2013, which took place in London, by a 34-27 score.

The Minnesota Vikings have listed three players as questionable: CB Xavier Rhodes, QB Sam Bradford and LB Anthony Barr. All were limited in Friday’s practice and were the only players on the roster who did not participate in full.

Head coach Mike Zimmer said he expects both Bradford and Barr to start, and there are no indications that Rhodes won’t be ready to go.

The Pittsburgh Steelers have listed one player as out (T Jerald Hawkins) and three players questionable (TE Vance McDonald, DL Stephon Tuitt, S JJ Wilcox). Tuitt and Wilcox were limited on Friday’s practice and McDonald did not participate on Friday.

According to Weather Channel, the forecast for Sunday in Pittsburgh calls for a high of 83 degrees with partly cloudy skies and a high wind speed of just four miles per hour.

Minnesota’s offense faces a Steeler defense that has some similarities to the Saints defense. It has some playmakers in the front seven and a secondary that lacks experience and talent. Defensively, the Vikings defense gets a much tougher test after halting the Saints to 19 points last week. Pittsburgh’s offense includes a two-time Super Bowl-winning quarterback and two of the best skill position players in the NFL, and that’s not to mention a rock solid offensive line.

The Vikings contained a Saints offense that didn’t feature many weapons outside of wide receiver Michael Thomas. Week 2 features a much more difficult test, and the Vikings will need to find some sort of solution for Antonio Brown in the slot to have a chance.

This game will be close — which means bet the Vikings against the spread — but the Steelers will take the win. 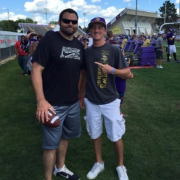 Wait, New Orleans had a higher ranked offense and scored more points than Pittsburgh last year, Mark Ingram is a very, very nice weapon, Coby Fleener is a heck of a lot better receiver than Jesse James at TE, and I imagine the debate over who’s better, Drew Brees or Ben Roethlisberger, could occupy a million fans and a thousand pundits for, oh, a dozen years, and you’re of the opinion that Pittsburgh’s offense will be a “much tougher test” for the Vikings’ D than New Orleans. Why? Bryant and, especially, Rogers don’t seem to me to be “much” better than Ted Ginn and Brandon Coleman, and both teams have rookie third rounders in the RB2 spot, except Alvin Kamara was drafted 38 spots higher than James Conner. I’ll grant you that the Saints at home scored two points less than the Steelers did on the road last week, but then the Saints were facing a defense that was sixth in the league last year in fewest points against, while the Steelers were facing the 30th-ranked points-against defense.

But I’ll give you an out, Drew, two even: Is Pittsburgh’s offensive line that much better than the Saints’? And is Pittsburgh’s home field advantage just legendarily overwhelming?

cka2nd – I have a ton of respect for LeVeon Bell and Antonio Brown. Bell’s patience and vision could be a problem for the Vikings’ sometimes undisciplined run defense. Brown, meanwhile, is probably the best slot receiver in the NFL — not to mention the best overall wide receiver. While Alexander and Newman would sufficient in the slot against the Saints, Brown is a completely different challenge.

Additionally, Pittsburgh’s offensive line is a couple tiers ahead of NOLA’s, in my opinion. Villanueva is a rock solid blind side protector and the right side combo of DeCastro and Gilbert is up there with the best in the league. Won’t be as easy to pressure Big Ben this week as it was to get to Brees last week.

The Steelers have a dual threat (rushing/receiving) running back who is one of the best in the league. The Saints couldn’t run the ball at all, and that was due to more than just the Vikings defense. The Saints were also without both of their presumed starting offensive tackles going into the season.

If you don’t comprehend what that all means, go find some game video of what the Vikings looked like last year with Asiata trying to pick up a third and short.

Bradford now a game time decision. If I were a betting man… Keenum gets the start tomorrow.