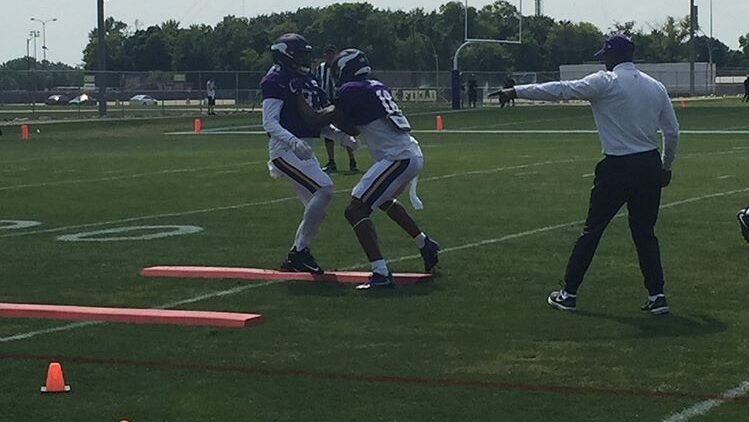 The Minnesota Vikings are set to compete in their first matchup of the NFL preseason tonight against the Buffalo Bills at Ralph Wilson Stadium in Orchard Park, N.Y.

Following — what certainly appeared to be — a very successful final training camp in Mankato, Mike Zimmer and his staff will continue their positional evaluations tonight. Plenty of impact roles remain up-for-grabs, as Minnesota has the luxury of rostering 90 players up until the beginning of the 2017 season following a change made by league office this offseason to eliminate the late-summer 75-man roster cut check point.

As a result, the preseason has never been more important than it is in 2017 — extra days for 15 players should result in more competition, higher intensity and, above all, this change should create a better on-field product during the month of August (while also increasing NFL revenue, shocker).

Minnesota is matched up against Buffalo tonight, on paper, but the preseason uniquely is less about who the opponent is and more about determining how to best prepare the entire 90-man depth chart for September based on what the Bills’ strengths and weaknesses.

Week 1 of the NFL preseason, generally speaking, yields between three and five series for projected starters, roughly two quarters of second- and third-team “bubble” players and, per standard, the final 15 minutes is typically reserved for the players that, in the words of the great Lou Brown (Major League), “Guys that will be bagging groceries in a couple weeks”.

As hysterically blunt as it is, Brown’s point stands true — 47 of these players must go come September. Minnesota’s brain trust has roughly one month to make a handful of decisions regarding which players will take the field against the New Orleans Saints but, more importantly, Zimmer and Co. will need to determine an optimal 53-man depth chart this coming season while still managing to hold onto the surplus of raw talent at the back end of the roster.

Minnesota fans were very frustrated with their wide receiver depth chart back in 2015. The last Vikings wide receiver to cross the 1,000-yard plateau — as I’ve stated 92 times prior — was Sidney Rice back in 2009, and there was nothing Greg Jennings, Mike Wallace or Jerome Simpson could do to help that. Enter Stefon Diggs — the lightning-quick, swag-tastic pass-catcher out of Maryland who has earned a spot in fans’ hearts forever following a breakout performance against the Green Bay Packers Week 2 last season at the U.S. Bank home opener.

In combination with progression and, ultimately, dramatic emergence of fundamental tactician Adam Thielen, the Vikings’ wide receiver depth chart all of a sudden started looking pretty solid at the top. The team then drafted Laquon Treadwell — who the jury is still out on — and signed former 1,000-yard wide receiver Michael Floyd to give the unit a strong and potentially dominant pass-catching unit.

Floyd, however, will be suspended for the first four games of this upcoming season — if by chance you hadn’t heard. As a result, Minnesota will likely keep six wide receivers (as they have fairly consistently in the past), one of which will not be Floyd as his position on the team will not count against the 53-man depth chart. This leaves veteran Jarius Wright, who, by all accounts, has locked himself in to a rotational slot receiver role; 5th-round pick Rodney Adams; 7th-round pick Stacy Coley; former Golden Gopher Isaac Fruechte; the first professional football player native to Germany, Moritz Böhringer; undrafted training camp standout RJ Shelton — and former standout Arizona wide receiver, Cayleb Jones.

Jones, who went undrafted last season following an impressive career with the Wildcasts, spent last year’s camp with the Philadephia Eagles, but he ultimately came up short of their 53-man roster. Quarterback Carson Wentz’s top trio of Alshon Jeffery, Jordan Matthews and Torrey Smith makes for a difficult positional chart to crack — which to some extent played a role in Jones signing with the Vikings at the end of this past December.

“Philadelphia, that’s just a great organization,” Jones said following afternoon practice at Blakeslee Field last week. “There are a lot of differences. Just being a rookie against your second go-around at training camp. Understanding concepts better, how training camp works, when to exert energy, how to rest and recover. But, overall, football is football, and I love being here.

“The atmosphere is definitely great in Mankato; I’m having a good time.”

The former Wildcat has been very impressive with the Vikings so far this offseason, showing talented that ranges from natural athleticism to textbook fundamentals. The Floyd suspension plus an impressive training camp now has Jones in the mix for either the No. 5 or No. 6 wide receiver spot (again, excluding Floyd).

Drops have been a bit of an issue for Jones, but his route-running technique, crisp cuts and knowledge of route depths have put him in position to emerge as a weapon a la Thielen — to a lesser extent — following a year of honing his craft. His pristine routes should come as no shock, however, as apparently defined cuts and quick-twitch movements run in his blood.

Zay Jones, the former Fred Biletnikoff award snub and East Carolina reception juggernaut, is Cayleb’s younger brother. The younger Jones entered this past draft following an absolutely absurd 158-catch season, which was largely a product of the second-round pick’s outstanding talent for getting off the line of scrimmage quickly, finding his field destination and reaching said point in a quick, efficient manner — similar to how his older brother has looked at Vikings practice.

“I think Zay is more quick-twitch,” Cayleb said. “He’s better in the slot, as far as some of his routes and I think I am a longer strider. We have a totally different games and, yeah, we are kind of similar in size, but we are still really different players.

“He does a ton of stuff well — runs great routes, good blocker, hustles and does plenty of other stuff as well.”

While there are clear-cut difference to their games, it should not come as a shock that younger brother’s refined technique has rubbed off on the first-born Jones. The two spent the offseason training in Los Angeles alongside a handful of other Vikings players and multiple trainers.

“This summer [Zay and I] trained together in Los Angeles,” Cayleb said. “A lot of the other guys were training there too  — Anthony Barr was there, Trae Waynes was there and E.K. [Eric Kendricks] was there. We ran routes together this summer, but both of us started playing receiver roughly halfway through high school.”

Now, months later, the two highly-competitive and clearly talented brothers will face off in Zay’s first NFL game — and, again, it should come as no shock that the pair of pass-catchers are both thrilled about the opportunity while remaining “in the zone” competitively.

“It’s definitely a dream for me and him, you know, and our family,” Cayleb said. “I’m just excited right now man. Right now, I’m just trying to take it one day at a time until we get there.

“I’m so excited that I get to see my brother.”

Once the duo steps on the field, however, it’s all-hands on deck. The brothers Jones have been competing since Day 1, as Cayleb recalls, in everything from stylish shoes to multiplayer video games.

“We were extremely competitive,” he said. “I feel like we competed in everything — who was wearing the coolest shoes to who was the best at video games. You know, the typical brother stuff.”

His childhood video games of choice, by the way — Super Mario 64 and Golden Eye (James Bond).

As excited as the older Jones is about competing against his kid brother in Buffalo tonight, his primary focus remains where it needs to be in order to give himself a chance to crack a suddenly talented Vikings wide receiver unit.

“It’s important to capitalize,” he said. “Capitalizing on special teams, doing what you’re supposed to do off the field, things to do technique-wise and just doing your job.”

Jones is just one player to keep an eye on this preseason, as he has quickly become a dark horse candidate to contribute to Pat Shurmur’s offense this season. With emotions running high and a competitive drive coursing through his veins as it did so many years ago on a lesser stage, the elder Jones brother should be considered a candidate for a big day against a work-in-progress second-team Bills cornerback depth chart composed of rookie second-round pick Tre White, Kevin Seymour and Hard Knocks Hall-of-Famer Charles James among others.

“It is fun, I’ll enjoy playing my brother,” Cayleb said. “But, I’m still trying to win a job. He has a job over there, and now I’m trying to win mine.

“That’s my main focus, but it will be great to see my family, but my focus is still on competing.”

Offensive coordinator Pat Shurmur has now had an entire offseason to implement his version of the West Coast scheme. Rather than being a run-first team like the Vikings were with Adrian Peterson, the offense seeks to be much more balanced and unpredictable. We will get a glimpse of how the offense will be run tonight.

The competition for starting center, kicker/punter/returner, depth at wide receiver, and backup quarterback will be thrust to the forefront this evening. Jobs are on the line, so expect some intense football in Buffalo.

Quarterback Tyrod Taylor likely won’t play more than a series or two; Wide Receiver Sammy Watkins is a near-lock to be in sweatpants due to injury; and — most importantly — the Bills depth beyond their starters are particularly weak.

Minnesota, on the other hand, has fairly impressive depth across the board on defense (weak-side linebacker excluded), and starting-caliber players such as Trae Waynes and Mackensie Alexander, for example, should be considered strong candidates to see extended work this week. Scoring points on the Bills’ defense will likely be an issue, but it’s hard to imagine Dalvin Cook not making an impact against second- and third-team units following such an impressive training camp.

It will likely be a low-scoring affair in Buffalo tonight, as both teams possess outstanding talent on the defensive side of the football. Minnesota may have arguably the best defense in professional football, but Zimmer’s group will be tested early in the game by dual-threat quarterback Tyrod Taylor.

As for the offensive side of the football, look for the Vikings to test out their new rushing attack and unleash the electric and explosive talent of (somehow) second-round rusher, Dalvin Cook.