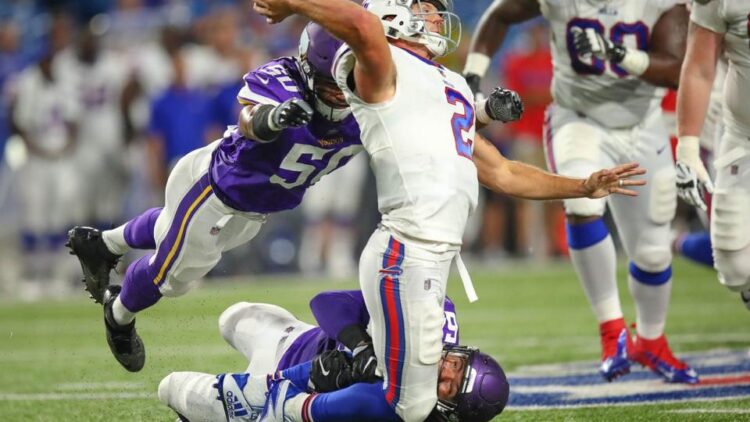 The 2017 Vikings’ first preseason action went about as expected in a general sense — offensive execution was sloppy, and the defense took advantage to create opportunities for turnovers and 3-and-outs.

After a scoreless first quarter, the teams each tallied field goals in the second quarter to go into halftime at a 3-3 score. Minnesota’s offense found a spark in the third quarter when second-string quarterback Case Keenum led a seven-play, 69-yard drive that culminated with a CJ Ham two-yard rushing touchdown.

Shortly after, third-string quarterback Taylor Heinicke found Rodney Adams in the flat for a two-yard touchdown via a funky goal line play design by offensive coordinator Pat Shurmur to push the lead to 17-3.

Buffalo cut the lead in half after a one-yard touchdown reception by Dezmin Lewis on a pinpoint fade route pass from Nathan Peterman. Minnesota then played keep-away the rest of the game, and a botched snap on a fourth-down play during Buffalo’s final drive effectively ended the game.

The game featured several bubble players taking advantage of opportunities presented to stabilize themselves as favorites for the 53-man roster. Others saw themselves slip farther and farther away from that status.

And for some, their position group is in such flux that nobody really knows what to think (yes, this line is about the offensive line).

See the key takeaways from preseason game No. 1, below:

It’s early, no doubt. But undrafted free agents Tashawn Bower and Eric Wilson are both in the mix for roster spots following the conclusion of training camp, and each of them put on impressive displays in their NFL debuts Thursday night.

Bower, a defensive end out of LSU, has been compared to Danielle Hunter all offseason — and not just because of his alma mater. Bower possesses the elite natural size and athleticism that Hunter was known for as a prospect in 2015. However, Bower showed very little in his college film that showed he could be an immediate contributor on an NFL roster.

His performance on Thursday night was contradictory to that narrative. Bower found himself in the background on a play-by-play basis, powering through offensive tackles to collapse the pocket consistently. He registered two tackles and one sack on the night, with several more pressures.

Wilson earned a ton of snaps as a linebacker with the second and third team defenses. He recorded six total tackles (four solo, two assisted), which led the team. Additionally, Wilson displayed a nose for the ball in coverage. He tallied a pass deflection on a would-be touchdown pass from Nathan Peterman in the fourth quarter, timing his leap perfectly to get a couple of fingers on the ball.

Both Bower and Wilson are incredibly raw, but incredibly athletic, players. If they can rapidly learn technique during the preseason, they’ll have a strong bid to make the roster.

The Vikings’ first-team offense, led by quarterback Sam Bradford, was on the field for three series — and only recorded one first down. The offensive line struggles that doomed the Vikings in 2016 remained and the high checkdown tendency of Bradford was still evident.

Starting tackles Rashod Hill and Mike Remmers each miserably allowed a sack while several other pressures were allowed by other members of the line. It’s tough to find a rhythm with zero pass protection.

If there was one positive to take away from the performance of the Minnesota offense, it was Dalvin Cook. The birthday boy put on a uniform for the first time in his NFL career and looked the part of a feature running back. He did what he could with shady run blocking, racking up 13 yards on five carries. But Cook’s contributions as a receiver is what caught my eye. He looked natural both catching the football and turning upfield once securing the catch.

One of the most anticipated training camp battles heading into 2017 was the backup quarterback battle between Case Keenum and Taylor Heinicke. Over the last few days of camp, it seemed like Keenum took a slight edge in that race and it’s likely why he played with the second team in the game.

In Preseason Game 1, the gap widened. Keenum entered the game for Bradford and looked poised and confident leading Minnesota’s offense. He led a crisp seven-play drive to notch the first touchdown of the preseason and finished completing 11 of 16 attempts for 121 yards.

Meanwhile, Heinicke was a bit erratic with his accuracy and, despite leading a touchdown drive of his own, did not look the part of a backup quarterback. He finished with just three completions on eight attempts for 20 yards, a short touchdown pass to Rodney Adams and a really poor interception.

Seventh-round pick Stacy Coley took advantage of the snaps he received as an outside receiver in his professional debut. He ran crisp routes and made himself available to both Keenum and Heinicke when his number was called.

Coley possesses several traits similar to those of Stefon Diggs. He’s a ‘small’ receiver, but not really small at 6’0″ tall and he moves swiftly in and out of cuts. It’s as if he is gliding across the field when he moves. Overall, Coley finished with 67 yards receiving (which led the team) on three receptions.

Third-year man Isaac Fruechte has been a fringe player throughout his entire career, and it’s the same story in 2017. He’s still battling for a spot and he’s doing what he can to contribute on special teams to grab that spot.

Fruechte had a couple of opportunities as a receiver in Thursday’s game, specifically in the form of a back-shoulder red zone toss from Heinicke. The throw was pretty good and the timing was solid. However, as Fruechte gained position to make the catch, he attempted to make the catch with his chest instead of plucking the ball out of the air, which is an unusual strategy.

The Vikings got a win, and it was super awesome to watch football again, meaningless or not. Outside of a few players that really made a name for themselves, it’s important to remember not to jump to conclusions after one game.

This game simply means football is back. And that should be enough for now, right?