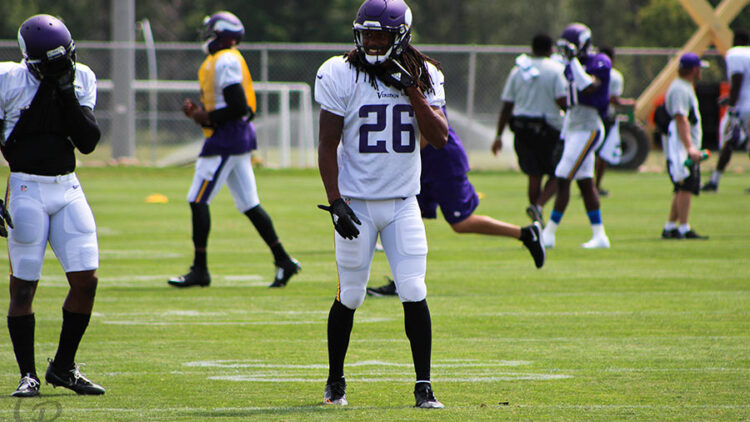 Happy Saturday, gang. I’m giving Adam and Austin a break and manning the live blog for walk-thru this morning. Hang out here as we follow along with all the happenings in Mankato.

10:30am: Here’s a quick schedule for the day via Mike Wobschall. The morning walk-thru will conclude with a Mike Zimmer press conference, and the evening practice will be followed by some festivities.

10:39am: It’s another nice one in Mankato. Beautiful day and a decent number of fans for walk-thru.

10:42am: Brandon Fusco isn’t participating in walk-thru this morning after leaving yesterday’s practice with an injury. Looks like Joe Berger is filling in at right guard.

10:45am: For what it’s worth, yesterday I wrote about the center position and how it would be ideal if John Sullivan claims the starting job. Theoretically, we’re seeing Berger’s versatility as a backup now as he slides to guard.

10:54am: Our guy Andy Carlson, podcaster extraodinaire, had a great recap of camp so far yesterday. He was joined by Luke Inman, and Josh Zimmer, and it’s definitely worth a listen.

10:58am: Speak of the devil, Luke Inman has an update on Fusco. Looks like it’s just a stinger. Good news.

Johnson, Diggs and Thielen are the 1st team WRs in walk-thru.

Pretty consistent with what we’ve been seeing at WR. Charles Johnson continues his camp resurgence and is the leader to start. How long he can hold off Treadwell remains to be seen.

11:13am: That was…quick and uneventful. Not too surprising for a Saturday walkthrough as camp draws to a close.

And that's it for AM walkthrough. Zimmer taking the podium again shortly. #VikingsCamp

Still we’ll hang out here and grab some quotes from Zimmer and any other interesting tidbits.

11:20am: Fusco to this point isn’t willing to talk about the injury, but tells Eric Thompson he feels at home at right guard.

11:38am: Fusco is out for tonight’s scrimmage, but Mike Zimmer says the injury isn’t serious.

11:41am: Brent notes Zimmer notes Fusco has looked the best he’d seen him before the injury.

11:48am: Zimmer has been working with Mackensie Alexander one-on-one. By most accounts, Alexander has started slowly in camp, though that’s not too surprising. We may see him eased into action in his rookie season, much like Waynes was last year.

11:57am: Zimmer says not to read too much into Adam Thielen running with the first team so far in camp.

12:08pm: An update on participants in tonight’s practice. Zimmer says Patterson and McKinnon will both be held out.

12:16pm: Walk-thru and interviews are over. Check back with us tonight for coverage of the evening practice.