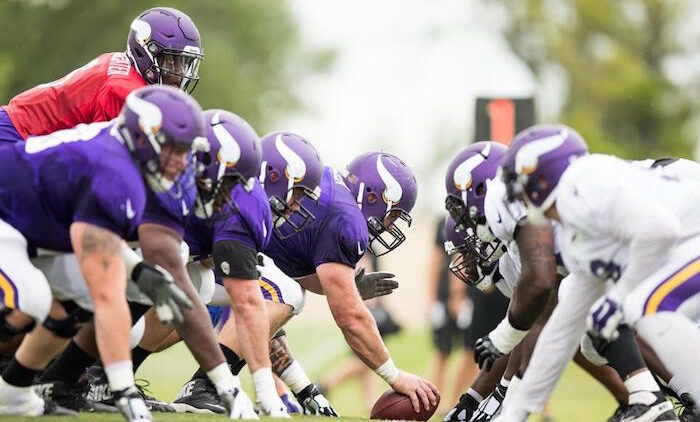 It was nice and all for the Minnesota Vikings players to get a day off yesterday, but it is back to work today at training camp in Mankato. Some injury notes from this morning’s walk-thru should make the afternoon practice a little more interesting.

Keep it here for the latest live updates throughout Vikings fifth day of camp practice.

2:35pm – The Adrian Peterson watch is underway as Vikings practice is set to begin very shortly.

Practice is set to begin in about 15 minutes from steamy Mankato. pic.twitter.com/kJYTGNBWi5

2:45pm – Jerick McKinnon joins Mike Harris and Cordarrelle Patterson on the sidelines today with a reported muscle strain. While Adrian Peterson is taking the practice field with pads on for the first time in camp.

Harris, McKinnon, Patterson all present but not in pads. #VikingsCamp

Adrian Peterson is dressed in pads and ready for practice at #VikingsCamppic.twitter.com/skCdFxfPJv

2:55pm – Minnesota begins today’s practice by working on their punt coverage. For the players on the bubble of making the Vikings opening day roster, this is where their biggest opportunity may come.

The outside gunners are working on catching punts to pin teams inside the 5. Sherels and Waynes look good.

3:00pm – Vikings offensive lineman getting some work in this afternoon with some early drills. New offensive line coach Tony Sparano has definitely raised the intensity when it comes to teaching this unit during camp.

3:05pm – On to the first 11-on-11s of the afternoon in Mankato. With Peterson now in mix, it will be interesting to see how the offense plays during passing situations.

Johnson and Diggs first team WRs to start. Pruitt getting reps with 1s and 2s in brief 11 on 11. #VikingsCamp

3:10pm – Tight end Rhett Ellison has yet to participate in a practice during training camp due to his knee injury. But it is great to see him still putting in work while his teammates are practicing.

3:20pm – The battle between Minnesota’s wide receivers and defensive backs has probably been the most exciting thing to watch at Vikings camp this summer. Each unit has their fair share of plays during the team’s time in Mankato so far.

3:30pm – Offensive tackle Matt Kalil has been performing well for the Vikings in camp…during drills. When the team lines up for 11-on-11s is where the Minnesota lineman has been experiencing his familiar struggles.

3:40pm Vikings fans should be extremely excited about the potential of wide receiver Laquon Treadwell heading into the season. The rookie could help turn this offense into one of the NFL’s best for 2016.

@Luke_Spinman teddy consoling him on the sidelines as he drops for push-ups.. The penalty for a dropped pass

Whew… AP looks FIESTY! First real contact taking a few runs up the gut with some steam.. He’s glad to be out playing the game he loves

3:50pm – Back to non-drill type situations for the offensive line and back to Kalil struggling again. Have to hope that a majority of Kalil’s struggles in camp are a result of Everson Griffen just being a straight up beast.

Red zone work now. Diggs beats Newman on an out. Griffen beats Kalil on next play for what would have been a sack.

3:55pm – Wide receiver Stefon Diggs will be looking to avoid the sophomore slump in his next NFL season. If this training camp is any indication, there should be no mention of the word “slump” in the near future for Diggs.

Crosser from Diggs to corner of end zone for a nice TD. Good catch and throw over Munnerlyn.

4:00pm – Trae Waynes performance in this training camp has really improved from a year ago. While this year’s rookie cornerback, Mackensie Alexander, is going through some of the same things that Waynes experienced in last year’s camp.

Waynes with nice coverage on a fade to Treadwell. Pass was incomplete.

Alexander called for PI on Wright. Waynes and Treadwell battle for position but Hill zips it past both.

4:10pm – The Vikings are getting some more special teams work in the middle of today’s practice. One of NFL’s top units a season ago, will they continue to have success in 2016?

Trea Wayne’s downs punt. And gets crap from Stefon Diggs because Trae didn’t know he was 5 yds in end zone

4:20pm – Minnesota is back to some work in the red zone. A lot of emphasis has been put on plays in the red zone today, an area of the offense where the Vikings would like to end up scoring more touchdowns than field goals this season.

Team red zone work now. Teddy short hops Diggs on what appeared go be a miscommunication. Follows it up with complete hitch to Diggs.

4:25pm – Treadwell has been part of the first team offense during much of the Vikings goal line work in camp so far. Likely an indication that Minnesota wants to use their new, big target in these situations during the upcoming season.

Treadwell getting first team goal line reps. I think we could see a lot of this, even if Johnson is starter.

4:30pm – If the backup quarterback situation in Minnesota has not been stressed enough on here in the last couple of days, it needs to be mentioned again. If Teddy goes down this year, good luck Vikings.

4:35pm – Getting close to the end of practice today as the team takes the field for some more 11-on-11 plays. Pretty even match between the wide receivers and defensive backs today so far.

Teddy drops a 25 yard dime to Thielen, right between Rhodes and Sendejo. Followed by Rudolph making a sweet catch in traffic up the seam.

4:40pm – The second team offense and defense now getting a chance to show what they can do in 11-on-11s. Treadwell vs Waynes has been the matchup to watch throughout training camp.

Second team in now for 11s.. Hill fakes handoff and pitches to Wright on end around..Gain of 15 with David Morgan blocking for him downfield

Offense getting sneaky, running an end around to Wright. Followed by Waynes sticking on Treadwell for a pass breakup.

4:45pm – MOBÖ ALERT! Vikings rookie wide receiver Mortiz Böhringer has had some expected bumps in the road during camp so far, but he has also made a fair share of impressive plays as well.

Mobo nice adjustment catch on the high pass from Stave. Roberson and Harris in coverage.

Stave to Böhringer on a nice sideline pattern! @MrMankatoVikes alert!

Stave throws to MoBo up the sideline. He makes a nice adjustment on the throw and hauls it in. Just in front of Anthony Harris.

4:55pm – The fifth day of Vikings training camp is coming to a close. There were a bunch of sequences for this team to be proud of and no new injuries to report (which is ALWAYS good).

Afternoon practice winding down on a very warm Wednesday in Mankato. Lots of good action today on both sides of the ball.