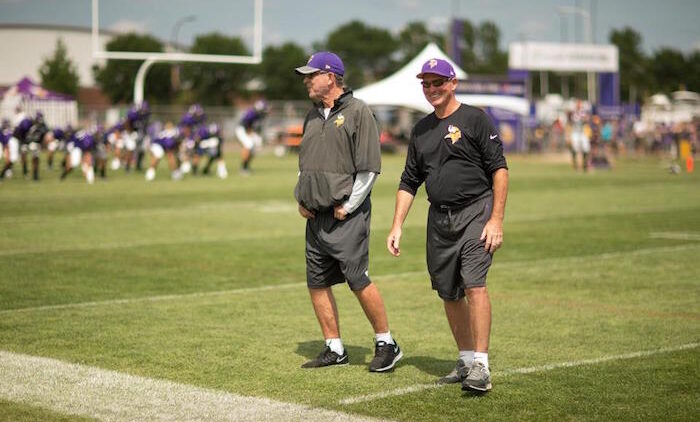 Seems like training camp just started but the Minnesota Vikings are already gearing up for their fourth day. The soreness level may be a little higher today than the first few days since the team is now practicing in full pads.

After today the team gets a day off on Tuesday before getting back to work on Wednesday. As for this morning’s walk-thru…

10:25am – The Vikings fourth walk-thru of training camp is just about ready to begin.

Another walk-through about to begin. pic.twitter.com/in6kdwMARL

10:35am – For the third straight day, Minnesota’s offensive line has different players working with the first team during their walk-thru. Nothing to really read into this right now as the Vikings are likely just trying to make sure that in case of injury, their backups are prepared to fill in.

It looks like Clemmings and Berger will see action with the first team today. They are early in the walkthrough.

No big depth chart changes on either side of the ball aside from the small OL shuffle.

10:50am – The play of the wide receivers slowed down a bit during yesterday’s first padded practice of training camp. With the defense able to be a little more physical, it will be interesting to see if the receivers come back with a vengeance and improve upon their performance from yesterday.

Thielen CJ outside Diggs inside.. McKinnon RB and MORGAN at TE (only bc Rudy is practicing w OLine in line blocking in GoalLine drill)

Treadwell and MoBo outside with Wright in slot with second team shot gun set .. TE Pruitt.. Asiata at RB

10:55am – Cordarrelle Patterson sitting out the walk-thru for the third straight day after suffering a shoulder injury in Minnesota’s first camp practice last Friday. Running back Adrian Peterson did not participate in the Vikings afternoon practice yesterday with a hamstring injury. Nothing to worry about just yet, team still playing it safe with Peterson’s camp involvement.

11:05am – Cornerback Trae Waynes had a very good day of practice yesterday and seems to be on track to becoming one of the Vikings two opening day starters. If his play in camp continues to remain at a high level, there would be no reason why the team should not use him as a starter.

Waynes just took a couple snaps in nickel opposite of Rhodes with Munnerlyn in the slot.

11:15am – Enjoying Minnesota using defensive end Danielle Hunter in their nickel package. In his second season, Hunter will hopefully take another step forward in 2016 toward becoming a dominant defensive player in the NFL.

11:25am – This morning’s walk-thru is coming to a close with Minnesota finishing up the AM activities with some special teams work.

Make sure to check back here around 2:45pm for our LIVE coverage of the Vikings afternoon practice!