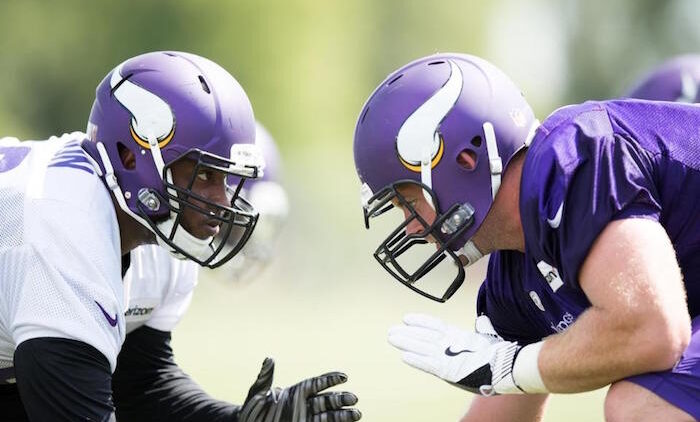 It is about to get physical like Olivia Newton-John at Vikings training camp today. Players will be practicing in full pads during practice later and the intensity should be pretty high.

The team has been experimenting with different combinations on the offensive line, wide receivers, and linebackers in each morning walk-thru of the past two days. It will be interesting to see if the shuffle continues this morning as Minnesota begins their third day of camp.

Join us below for updates!

10:25am – The players should be hitting the field shortly for the walk-thru and head coach Mike Zimmer is scheduled to speak to the media afterwards. Wonder if there will be any questions about Adrian Peterson and his hamstring?

A little more humid today in Mankato. About 15 minutes until the morning walkthrough begins.

10:30am – Players are beginning to hit the field and the team gets some positive news regarding defensive tackle Kenrick Ellis this morning.

First guy on the field is DT new guy… Louis

Greenway gets a huge applause when walking on the field… Classy

Kenrick Ellis has been activated from the PUP list, so he will practice today.

10:45am – The players participating with the first team offensive line this morning seem to be back to the way they were on the team’s first day of camp. Disregarding any future injuries, the Vikings opening day linemen will likely be Matt Kalil, Alex Boone, John Sullivan, Brandon Fusco, and Andre Smith.

10:50am – The team revealed yesterday that running back Adrian Peterson suffered an injury to his hamstring while working out the week before camp. Peterson has been limited in camp so far as the team is not trying to rush back their franchise running back.

AP out here walking through with 2nd team

Looking like we will see some red zone work this afternoon. Really interested to see Treadwell in those situations.

11:10am – Seems as though Peterson is still participating in this morning’s activities despite the injury to his hamstring. However, wide receiver Cordarrelle Patterson still remains on the sidelines with a shoulder injury.

NT Kenrick Ellis is off the PUP and taking part in walkthrough today for #Vikings. Patterson is not.

11:15am – The Vikings are looking like they will be sticking with Andrew Sendejo as their starting strong safety to open the season. But the competition for the backup safeties among Antone Exum, Anthony Harris, Jayron Kearse, and Michael Griffen has been pretty high at camp so far.

Harris getting more time with the 2’s today alongside Griffin.

More safety rotation, with Exum on third team and Harris with second.

11:25am – Vikings ending their third walk-thru of training camp with some special teams drills. Practice begins around 2:45pm later today and should be very exciting considering the team will play in full pads for the first time this summer.

Join us here once again as we have full coverage of the Vikings afternoon practice!