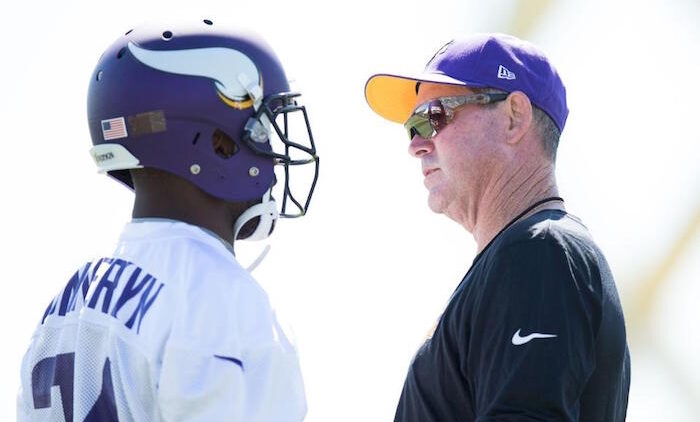 After a successful first day of training camp yesterday, the Minnesota Vikings are back on the field this morning for day two. Something to keep an eye on throughout the day is the status of wide receiver Cordarrelle Patterson after he left yesterday’s practice with an undisclosed injury.

Join us below for up the minute news and updates from this morning’s walk-thru, live from Mankato!

10:20am – The field is set for day two of Vikings training camp to take place.

– Some semi-good news on Patterson already as well.

Cordarrelle Patterson’s injury appears to be minor, I’m told. Shouldn’t take him long to get back to 100 percent.

Same defensive depth chart as yesterday for the first-team defense.

10:35am – Offensive coordinator Norv Turner scheduled to speak to the Vikings media after this morning’s walk-thru.

10:40am – Cordarrelle Patterson on the field during the walk-thru this morning. Still uncertain if he will participate in practice later today.

Cordarrelle Patterson is on the field for walk thru. He’s not doing anything but his presence is a good sign

10:45am – Vikings already mixing things up on their offensive line on the second day of camp.

Second team OL working with sully at center and Andre Smith at RT, as you’d expect given the first team

10:50am – Wide receiver Laquon Treadwell had an impressive first practice yesterday, it will be interesting to see if the Vikings increase his work on the first team during practice later today.

10:55am – Wide receiver Adam Thielen even seeing some time with the first team this morning.

Thielen get some looks with the first team too. He blended in there a little yesterday too.

11:00am – New linebacker Emmanuel Lamur is looking to challenge Chad Greenway during camp for his starting spot on the defense.

Once again saw Lamur blending in for Greenway with the 1’s in base. That happened a little yesterday too.

Check out this sick play to Diggs pic.twitter.com/bTOgOWSaO6

11:10am – The Vikings are hoping that last year’s first round draft pick Trae Waynes can make the next step and takeover as a starting corner this year.

Trae Waynes just got his first look with the 1’s opposite Rhodes. A little more shuffling doing on today in various spots.

11:25am – The walk-thru seems to be coming to a close on this second morning of Vikings training camp.

– Join us again later when the team hits the field for practice at 2:45pm!