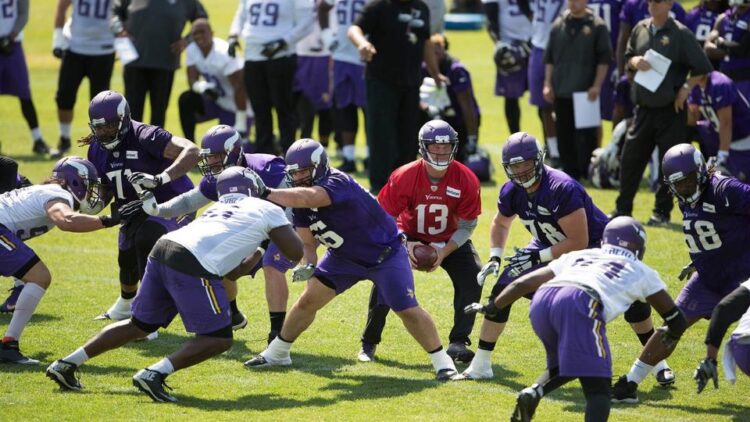 With one walkthrough practice in the books and nearly two weeks of training camp ahead, the Minnesota Vikings are already struggling with depth. More concerning is the fact that the injuries impact positions where depth isn’t just important; it’s crucial to Minnesota’s 2016 success.

As announced on the team’s official website, the Vikings have officially placed Taylor Heinicke and Mike Harris on he Non-Football Injury/Remains on Active List. They’re joined on the sidelines by Kenrick Ellis and Rhett Ellison, who start training camp as members of the Physically Unable to Perform list.

Heinicke arrived to camp yesterday with a cast around his left leg, which we later learned was the result of a freak offseason injury. The second-year quarterback made the final 53-man roster last year and was a strong contender to back up Teddy Bridgewater this offseason. Unfortunately, the ankle laceration sidelines Heinicke for at least two months and jeopardizes his chances of finishing camp as a member of the active squad.

Harris, meanwhile, was arguably Minnesota’s best offensive lineman last season. He made the switch from right tackle to right guard, where he thrived as a lead blocker for Adrian Peterson. Many expected Harris to compete with Brandon Fusco for starting duties, but were surprised when he didn’t join the team for initial walkthroughs this morning. According to head coach Mike Zimmer —per Chris Tomasson — Harris is out with an “illness” and could potentially return soon.

Joining the aforementioned players are Ellis and Ellison, who are making slow recoveries from football-related injuries. Ellison suffered a torn patellar tendon in Week 17 last year and is still working his way into football shape. Ellis, according to Darren Wolfson, is dealing with “back stiffness” and should be back to normal shortly.

For the Vikings, these injuries raise a few red flags. The most frightening development is the suddenly-thin depth at offensive line. Earlier this week, Phil Loadholt announced his retirement, and today, Harris couldn’t take the field. While John Sullivan appears healthy and eager to reclaim his starting position at center, the right side of the unit is thinner than anyone imagined; and that’s before any of training camp’s “live” snaps.

At tight end, Ellison has been a key cog in Norv Turner’s system, and his loss could impact Minnesota’s versatile running attack. However, rookie David Morgan is a potential replacement as the team’s third tight end and an equally intriguing option in both the running and passing games.

Sticking to offense, the Vikings now have just two NFL-ready quarterbacks in Bridgewater and Shaun Hill. Zimmer acknowledged that rookie Joel Stave will “get more reps” during training camp, but he’s still learning and only made the roster as an undrafted free agent. The offense remains the weaker of the two units for the Vikings, as Ellis should return to the defensive line soon and give Zimmer even more “toys” in the front seven.

Follow along as we continue our coverage of 2016 Minnesota Vikings training camp!