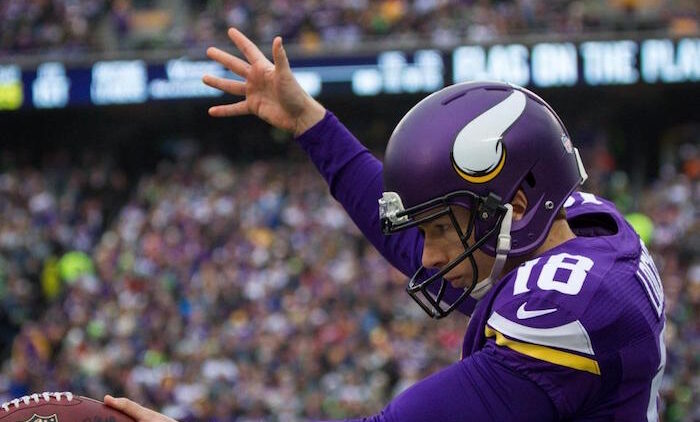 Current Minnesota Vikings punter Jeff Locke could be looking at some actual competition during the team’s training camp this summer. The team has brought in two punters to participate in this weekend’s rookie mini-camp and the Vikings could reportedly sign one by the end of the camp.

The first of the two punters vying for a spot on Minnesota’s roster is former Texas Tech punter Taylor Symmank. In his three seasons with the Red Raiders, he averaged 43.7 yards per punt.

Last season he finished with the ninth best average in the country with 46 yards per punt. However, an injury to his hip limited Symmank to only eight games in 2015.

Symmank does have experience in kickoffs and succeeded quite well at them while at Texas Tech. Of his 37 kickoffs last season, 27 of them ended up as touchbacks.

Nick O’Toole is the other punter who could possibly find his name on the Vikings roster after this weekend. The former West Virginia Mountaineer punted the ball over 200 times in 38 games during his three seasons at West Virginia.

Facial hair may be what O’Toole has been known for during his college career, but last season’s Big 12 leader in punting yards actually has a leg on him. While at West Virginia, O’Toole’s yards per punt average was higher than 45 yards in 8 of the last 13 games he played in. In comparison, Locke only achieved that feat with the Vikings in only 5 of the team’s 17 games last season.

It will be interesting to see if Minnesota’s move back into an indoor stadium will have an impact on their decision to keep Locke for this season or not. During his career with the Vikings, Locke has averaged 45.5 yards per punt when kicking indoors.

Whatever Minnesota’s decision will be, it is safe to say that the coaching staff is not happy with Locke’s lack of recent production. His time as a member of the Vikings could be coming to end sooner or later if he does not improve his punting performance.