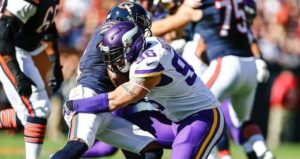 Well everyone, it happened. The Minnesota Vikings finally lost a game in 2016.

But this is good. Now they can focus on more important goals this season than trying to go undefeated. Like getting to a Super Bowl perhaps?

The Vikings will be looking to rebound this week against the Chicago Bears. Minnesota is 2-13 in their last 15 games played in Chicago, but this year’s Bears are about as scary as a stuffed animal found at the Vikings’ practice facility.

Before Minnesota takes the field on Monday night, there are a few things they must make sure they do in order to pick up their sixth win of the 2016 season.

DO – Go back to throwing shorter, quicker passes

For some strange reason, the Vikings offense looked completely different last Sunday in Philadelphia against the Eagles. The end result was not pretty.

Instead of sticking with what worked and lead the team to five victories in five weeks this season, Minnesota came out of the bye essentially trying to do too much.

Yes Norv Turner loves to have his quarterbacks run seven-step drops and use long, developing routes for his wide receivers, but that is not has worked for the Vikings in 2016. Minnesota and Sam Bradford have been successful this season by running plays that involve getting the ball out quicker to the Vikings’ pass catchers.

It worked and Minnesota won games. No need to get fancy and mess up what did not require any fixing.

Speaking of trying to force the offense into doing things that are unnecessary, the Vikings need to realize that this offense is no longer built to wear down the opposing defense with a bruising run game.

With no Adrian Peterson in the lineup and Bradford leading the way now, the offense plays much better this season when running the ball is less of a focal point. Not saying the Vikings should give up on the run game, but handing the ball off 30 times a game to Jerick McKinnon and Matt Asiata are not the keys to having a successful offense.

Anyone who has watched Cutler play throughout his career knows that once it begins to rain for the quarterback during a game, it pours. Meaning, a couple early interceptions or fumbles and Cutler basically loses all desire to get his team a win.

It is also just fun to see him look miserable on the sidelines. But with the way Minnesota’s defense has been playing in 2016, frustrating Cutler on Monday should be easier than making a package of ramen noodles.

Yes, Chicago has only one win this season. But they are also a team full of players and coaches that have experience in facing the Vikings.

No matter what each team’s record is heading into their matchups every year, the final scores usually seem to remain pretty close. Four of the last six meetings between the two teams have been decided by four points or less.

But after last week’s debacle against the Eagles, it is hard to believe that Mike Zimmer is going to let his team think that a win over the Bears will come easy.